Out and about in London

We're trying to ensure that each week we sally forth on at least one expedition that isn't to a supermarket. It's all too easy to fritter away so many hours in front of the computer screen that there's not really time for even a mini-excursion.

Recent forays included Highgate Cemetery(which I still haven't written up in full—all those stone angel photos to download), the David Byrne installation at the Roundhouse (that box is ticked anyway), and the Per Kirkeby exhibition at Tate Modern (no, we'd never heard of him either, and will promptly forget his name, since the work of this Danish geologist-cum-painter was a big disappointment). Last week we actually had lunch out as well, at Little Bay in Farringdon. We rarely return to restaurants, given the choice in London, but even though we'll probably never go back, this was good and surprisingly reasonable. Michael's pig cheek appetizer was the high point. I see on food blogs that in the States, too, the noble hog is currently subject to more adventurous gastronomic "nose to tail" exploitation than used to be the norm. Spaniards would be proud of us. 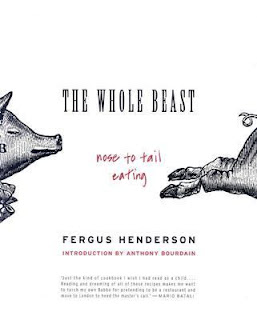 [Cover of cookbook by owner-chef of a celebrated London restaurant, St John in Smithfield. We've eaten at the satellite bistro, St John Bread and Wine in Spitalfields.]

The trip to Farringdon was prompted by the reorganization of my jewelry drawer, which itself was prompted by Michael's frustration at my rarely wearing the beautiful pieces he's bought me over the years. Instead of a jumble of chains and pendants, I now have all necklaces in the small plastic bags he had bought for sand samples; in addition, he installed two plastic container systems on the inside of my closet door, perfect for jewelry as well as the screws and nails the little drawers were intended to hold.

Delving through the assorted pins, rings, necklaces, etc. uncovered pieces that had been unwearable for . . . not years but decades. Hence our trip to Farringdon, the location of Hatton Garden, famed as London's Jewellery Quarter. You don't see the Hasidic Jews so visible in the Manhattan equivalent, but the general feel is similar(I base this not on having actually been to the NYC area, but on the Melanie Griffith film A Stranger Among Us). As we strolled past windows full of diamonds and gold, I clutching my bag of clasp-less beads and a few semi-precious stones, Michael was reminded of the daring middle-of-the-day jewel heists of the past couple weeks here in London. Those were in more fashionable areas—£40 million haul from Graff's on New Bond Street—but security was definitely in evidence here as well.

Having been turned down by a few places that didn't do repairs, we were directed to Holt's, where a charming girl was as helpful as she would have had we been laying precious gems before her. By the time we get back from France in October, I'll be able to wear, at long last, such family heirlooms as a cameo ring (replacement of missing half of gold band the most expensive repair), an amethyst ring (always far too big), and an exquisite gold locket (broken loop at top). My engagement ring will now have a blue-green tourmaline stone instead of the lost amethyst and various clasps on necklaces I love will finally be replaced.

That still left a bunch of costume jewelry that Holt's didn't deal with. The bead shop I had high hopes for couldn't handle the repairs themselves, but directed us to a wonderful hole-in-the-wall repair shop, LSJ, Laser Surgery Jewellery. Ring the buzzer, trek up a narrow flight of steps, and there at the top is another charming woman at a counter, while to the side technicians are bent over a long table, hard at work. They were willing to take on every piece remaining, cheerfully accepting leather cords and broken wire—this despite the fact that Michael noticed LSJ, too, had its supply of diamonds and other gems in the back room.

That was, let me see, last Thursday. This Monday, a bank holiday here in the UK, a dreary morning turned into a beautiful afternoon, so we took the Tate-to-Tate boat down the Thames to see the Richard Long exhibition at Tate Britain (the first Tate, from our perspective at least, is Tate Modern, a ten-minute-or-less walk from our flat). If the Per Kirkeby was a disappointment, this was the opposite. I'll end this post with images taken from Long's online newsletter of Room 4, a geologist's dream. [No photography was allowed and, sadly, the catalogue didn't include what were undoubtedly last-minute installations.] These rock configurations were so compelling that we wended our way back from the end of the exhibition for a second look. Michael would happily have set up camp for the night had it been possible. 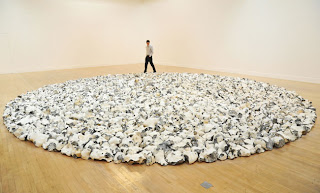 Posted by magpiemom at 8:30 AM