While we were wending our way along the Atlantic coast of France, good times were being had in Lansdale, PA, as well. I'll keep Kate's captions for these photos, first of a dinner Robert and she prepared for my parents, then the celebration for my mother's 85th birthday and Mom & Dad's 65th wedding anniversary, both on 16 September. They also received a fabulous bouquet and chocolates from our newly discovered relative in Buffalo (Lori is another genealogy enthusiast—bliss for my dad, who has been able to share the research he's done on my maternal grandmother's Deforest/Wemple links) and were toasted again at a special dinner with Geretha and family. There were other treats, no doubt, but the one I especially want to mention was my mom's first-ever pedicure, a gift from Geretha.

Kate's captions in brown, my additions in black:

First off [Robert's] delicious Yorkshire puddings; he was a little worried about the shape, but hell when was the last time we didn't just buy them from Tesco... 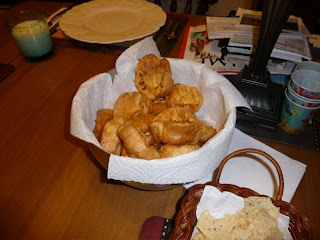 The table spread, and yes, Robert was actually impressed by my carne asada, though he did watch over the grilling and help carve the meat. [Kate used both a mallet and an ingenious piercing device (see Amazon) to tenderize a tougher but more flavorful cut of meat.] ... A weird meeting of traditional English and west coast Mexican. 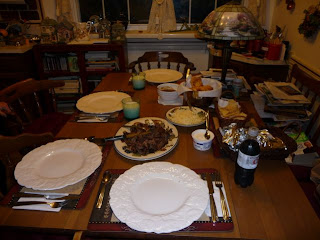 A couple of pics [I've included just my favorite] of the happy eaters (as suspected Grandma was very drawn to the Yorkshire puddings and Grandpa couldn't help picking at the steak): 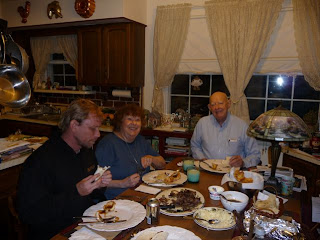 And finally the dessert - cranberry sorbet, my lemon lime cookies and nectarines. Before you ask, Robert left the nectarines though I insisted on putting them on as it looked nice... [Robert doesn't like fruit & veg.] 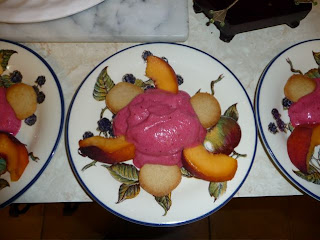 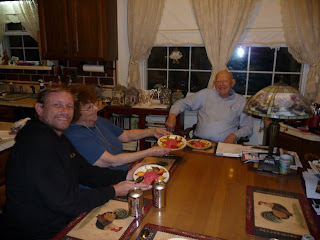 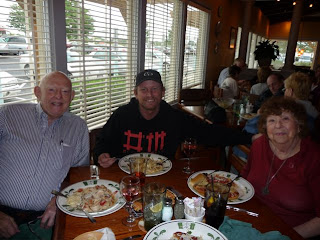 Grandpa didn't bring a camera, so he managed to get one on mine impressively. I think my silly face this time is to do with watching him attempt to adjust to watch the screen instead of putting his eye up to it. 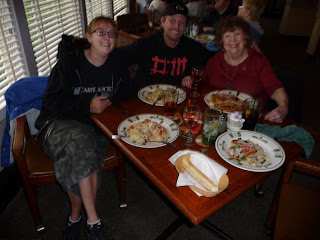 Grandma figuring out her new toy. I also have a nice flip video of the opening etc... [Unlike me, Robert registered the fact that the 16th was an anniversary as well as a birthday. Kate and he bought and filled a digital photo frame with archival images—a perfect gift.] 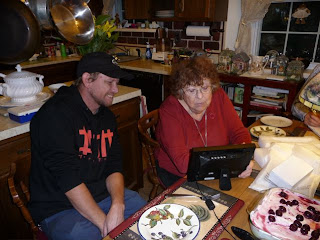 Everybody enjoying Robert's "cloud cake," his grandmother's recipe that he won a blue ribbon for at a fair as a child. Point of interest: it was the Frog Fair at Calaveras - centered around the Mark Twain story "The Notorious Jumping Frog of Calaveras County"... 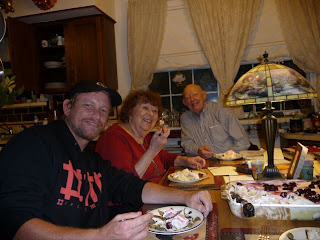