We missed the program shown on ITV 3 September 2009 about the day seventy years before when Neville Chamberlain's voice came over the radio at 11:15 am to announce, "This country is at war with Germany."

I did, though, see the review in The Guardian, which included stories like Unity Mitford's attempted suicide with a pearl-handled pistol and the sinking of the passenger liner SS Athenia by a U-boat that evening, a tragic case of vessel mis-identification.

However, the detail that most surprised me was this brief statement:

At London Zoo, the poisonous snakes and spiders were executed in case the zoo got bombed.

Contingency plans for the outbreak of war had obviously been in readiness. I was reminded of the surreal accounts of Berlin, where tigers, panthers, jaguars, and apes roamed the streets after the zoo was hit by British blockbuster bombs in 1943.

And from Simon Garfield's Guardian review of Richard Overy's 1939: Countdown to War comes this anecdote to remind us of how much times have changed:

[T]he British war minister Leslie Hore-Belisha learning of the invasion of Poland early on 1 September: "Damned Germans, to be awakened in this way." Worse was to come; his barber didn't turn up and he "realised he would have to shave himself". 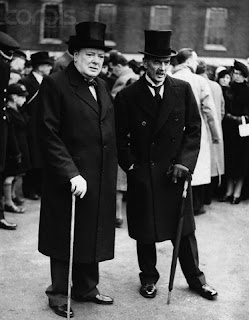 Chamberlain with Churchill, 1939
Posted by magpiemom at 10:37 AM