13 March - picked up by Kate at Kennedy, driven to West Village; dinner at The Diner

20 March - mw to Washington DC for screening of "Sand Wars" at documentary festival; cjw to Lansdale


15 April - return to NYC from Lansdale

19 April - Chinese artist Xu Bing's phoenixes at St John the Divine; lunch with Adam, Christina and Arianna at Henry's; the real Little Italy, Arthur Avenue, the Bronx; beer hall in market; glass of red wine in Albanian restaurant; dinner at Trattoria Zero Otto Nove (wine purchases incl. Brunello on hold for our return to NYC from shop next door - great staff - while waiting to be seated)


Posted by magpiemom at 9:03 AM No comments:

I knew that Kate had a surprise in mind for our last Friday in New York City, but I had no idea how special it would be. She has always been a giver of memorable gifts and is now resuming that role after a couple of years of grad school penury.

Michael had already received his present, a rack of engraved test tubes, each filled with a sand that Kate had collected from the five boroughs of NYC, plus Long Island. For the LI sand, she had taken herself out to Port Washington, written up in this post on her father's blog: http://throughthesandglass.typepad.com/through_the_sandglass/2009/02/building-new-york-the-long-island-sandminers.html. 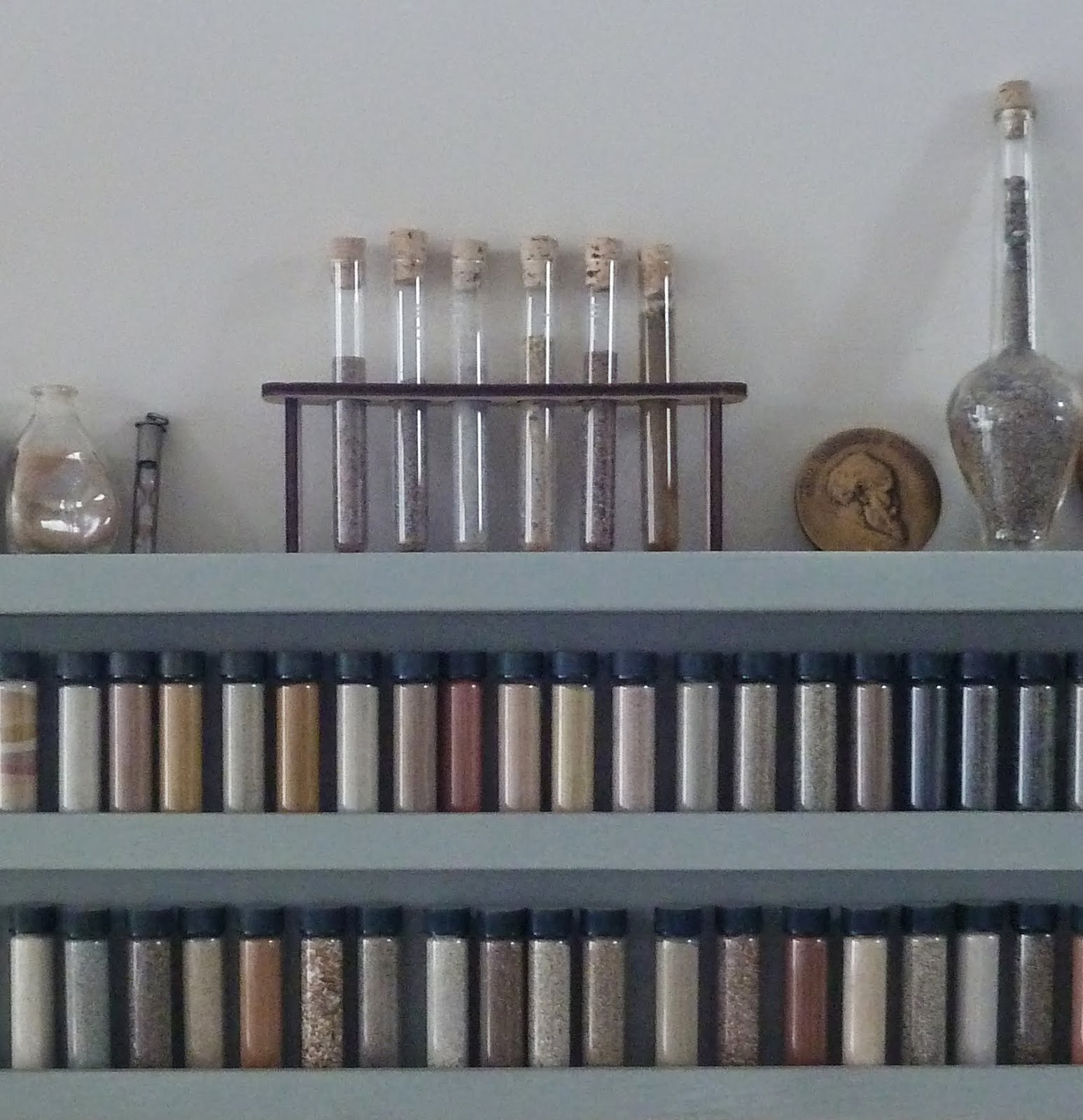 Before the surprise — surprises as it turned out — we took one of the various tours available at the Tenement Museum. Our guide was an exuberant young Nigerian-American woman, with equally exuberant hair, who was herself the daughter of immigrants. Sobered by the reality of crowded family life in a tiny apartment that was also the workplace of the father and his dressmaking staff, we then walked several blocks to what would be an afternoon of gastronomic indulgence. Different times, different lives.

Given her mother's liking for sweets, Kate had reserved three places at a dessert bar, an institution I didn't even know existed. Here are a few photos of the eponymous owner of ChikaLicious at work: 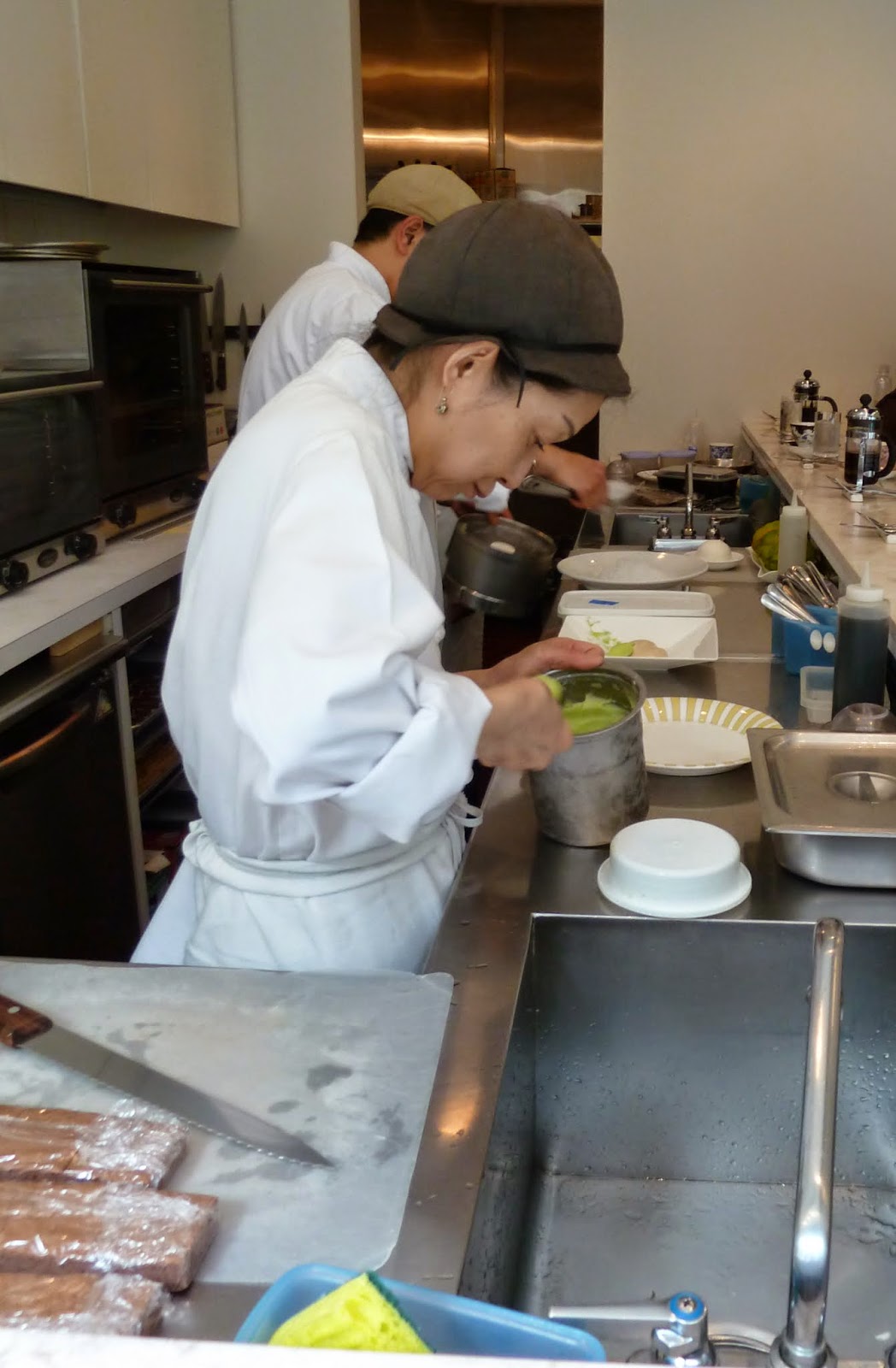 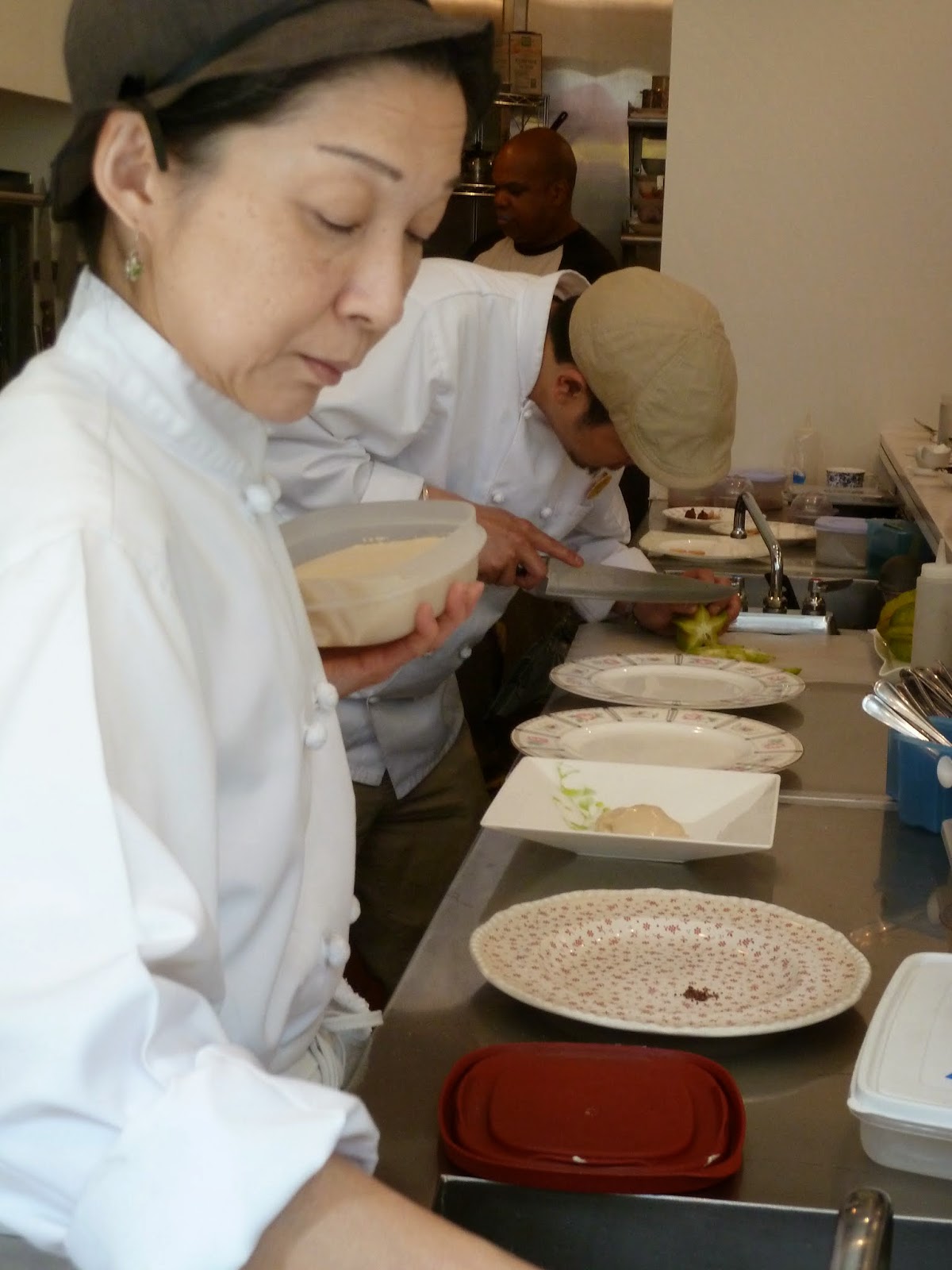 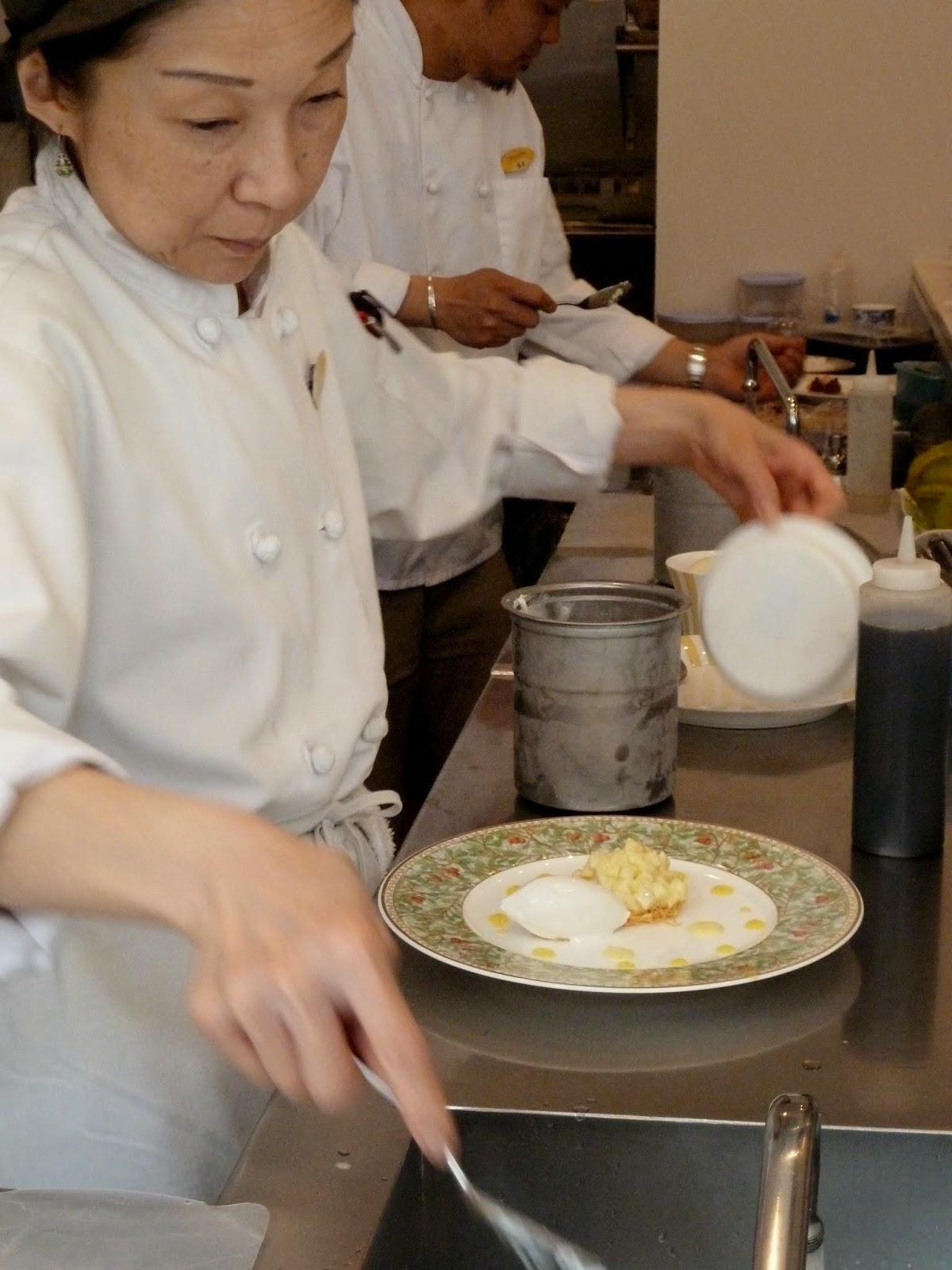 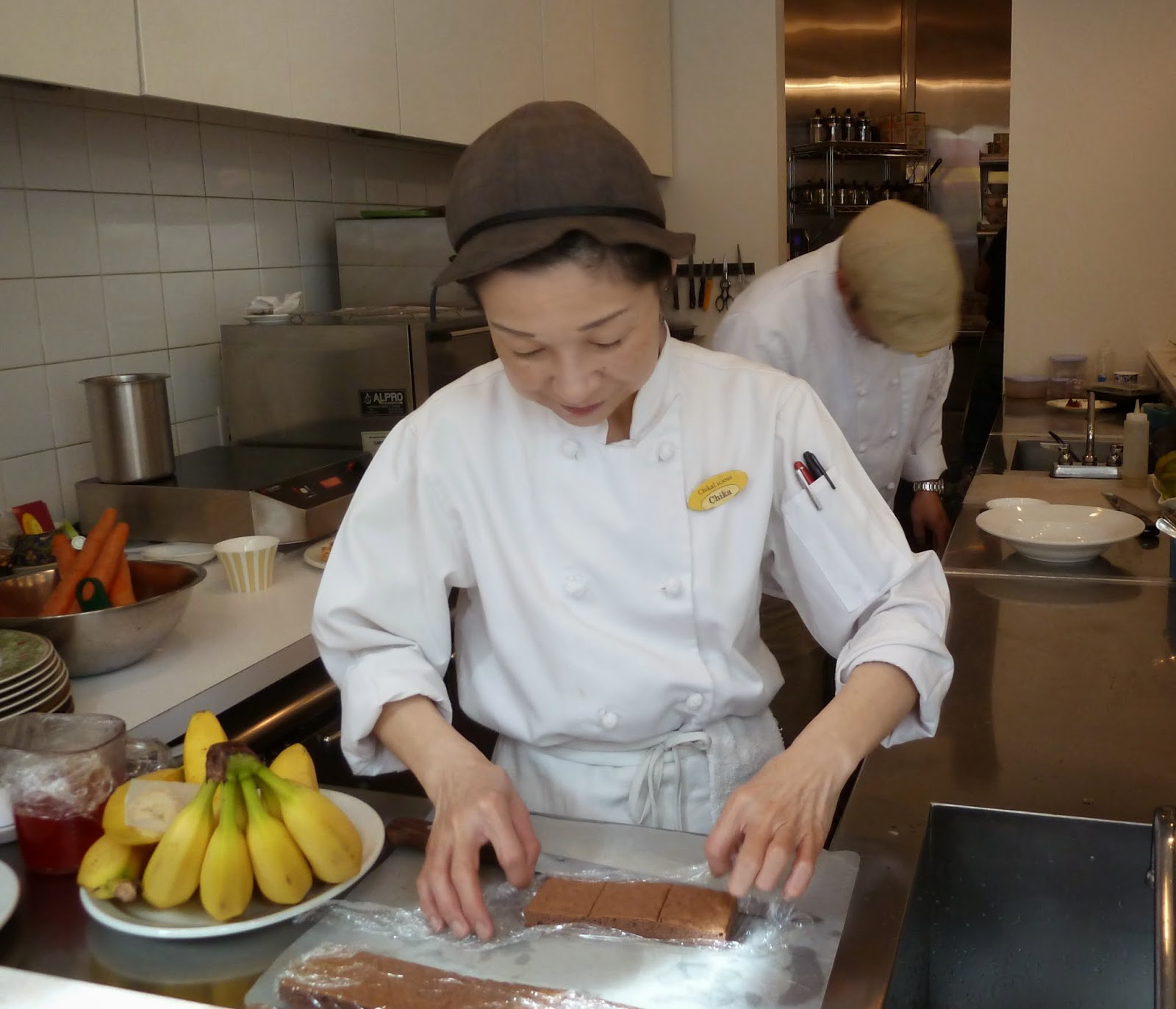 We chose three different wine pairings, so that we could maximize our sampling. First, though, an amuse-bouche arrived, combining the flavors of star anise and espresso. 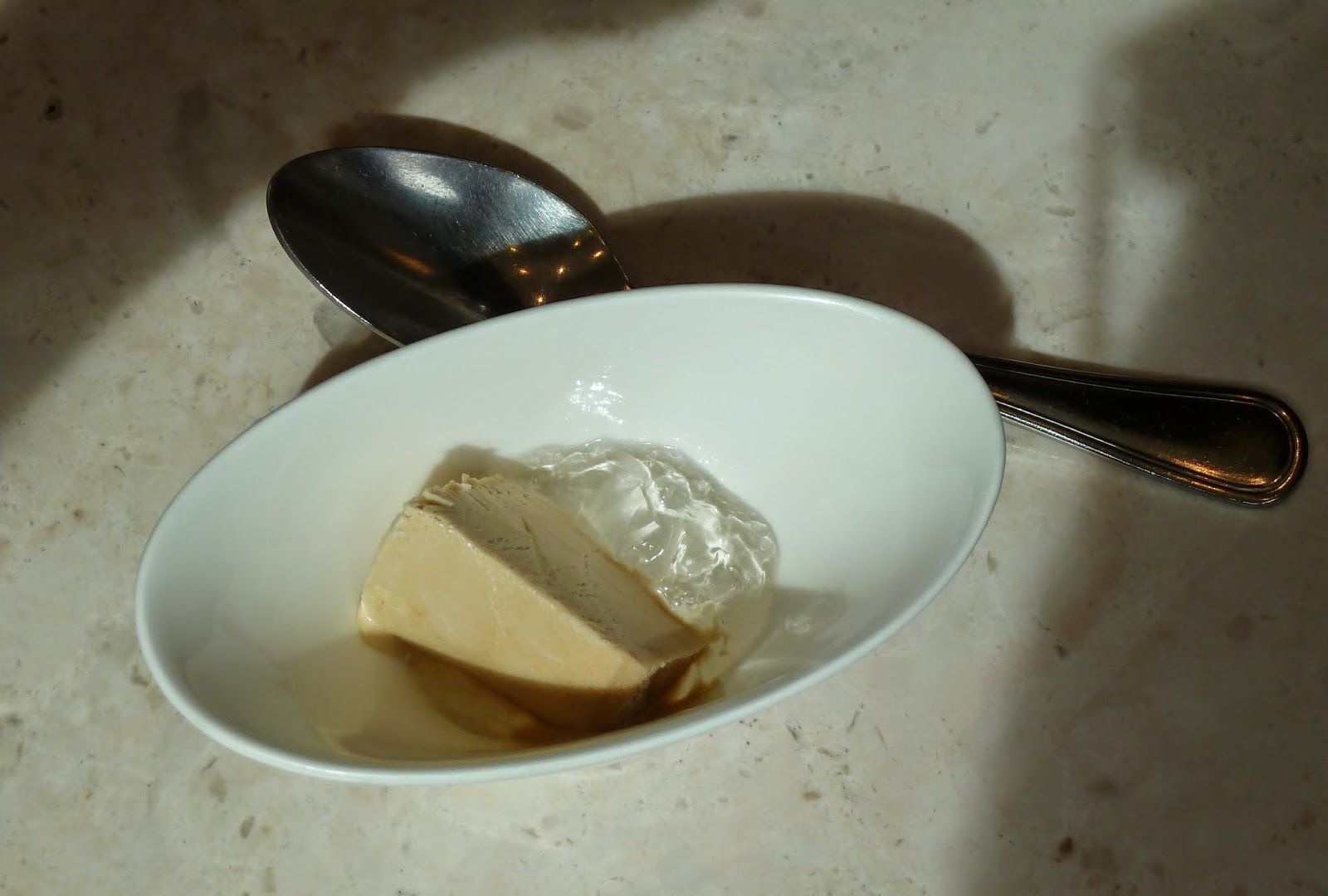 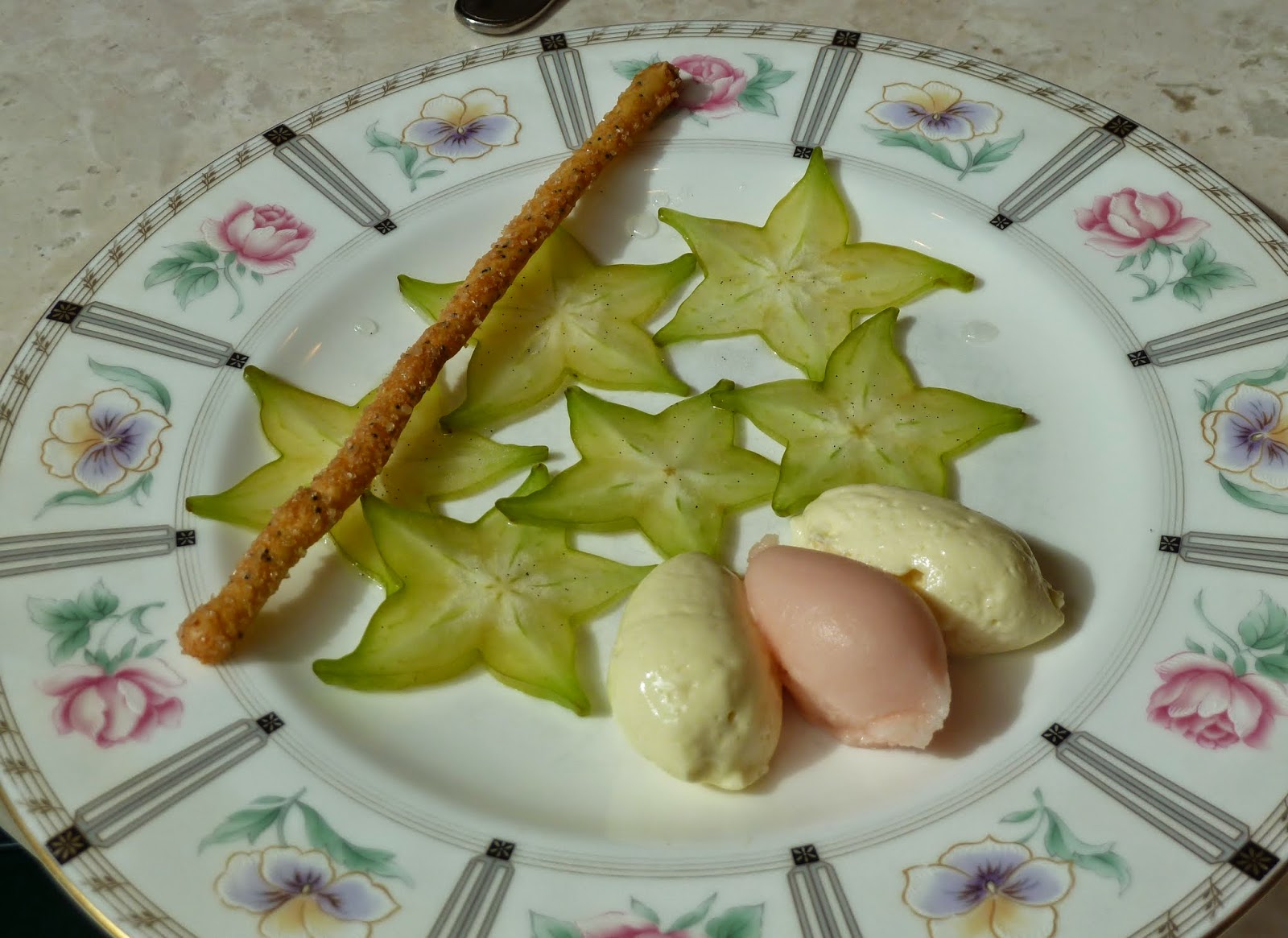 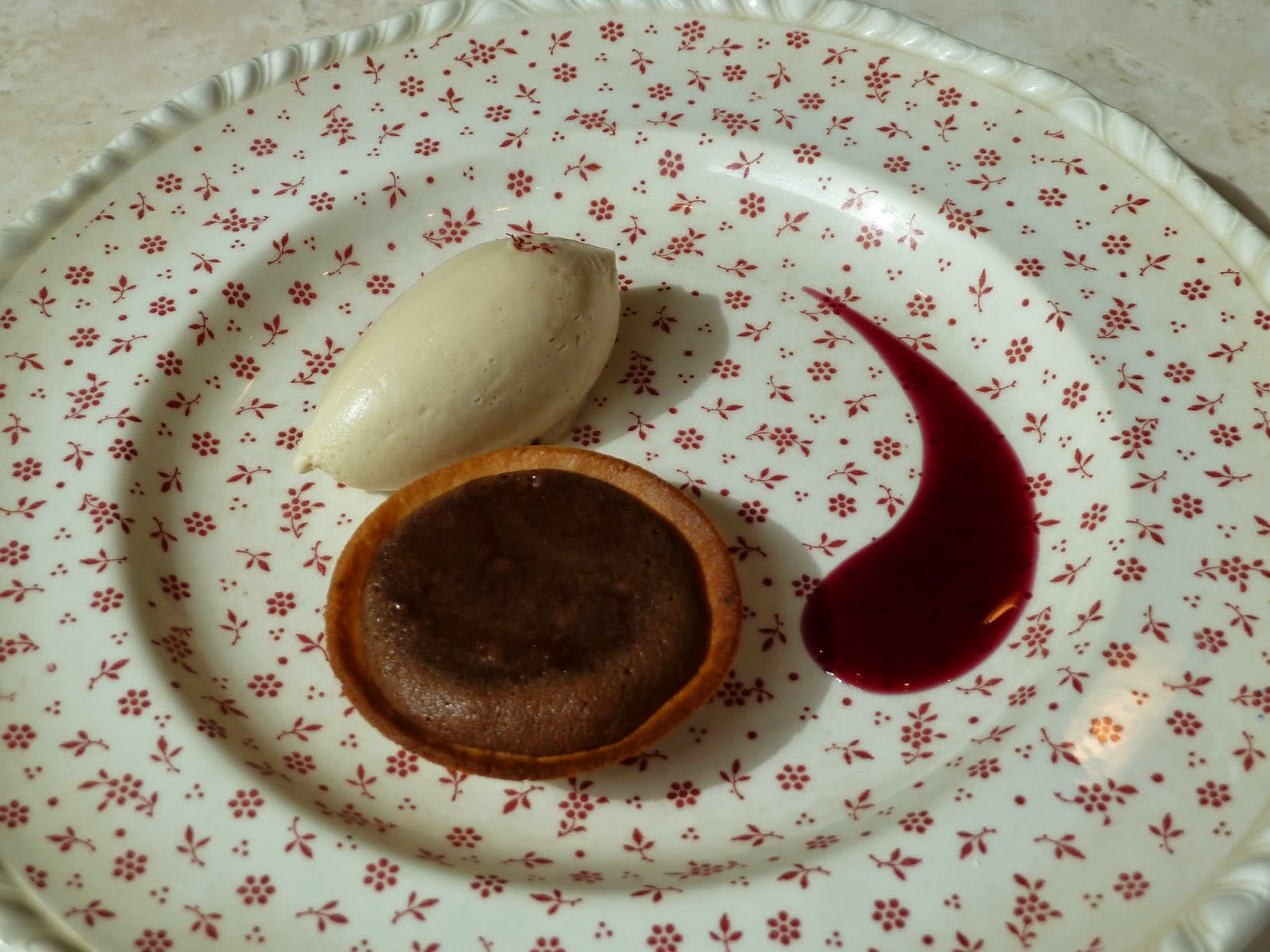 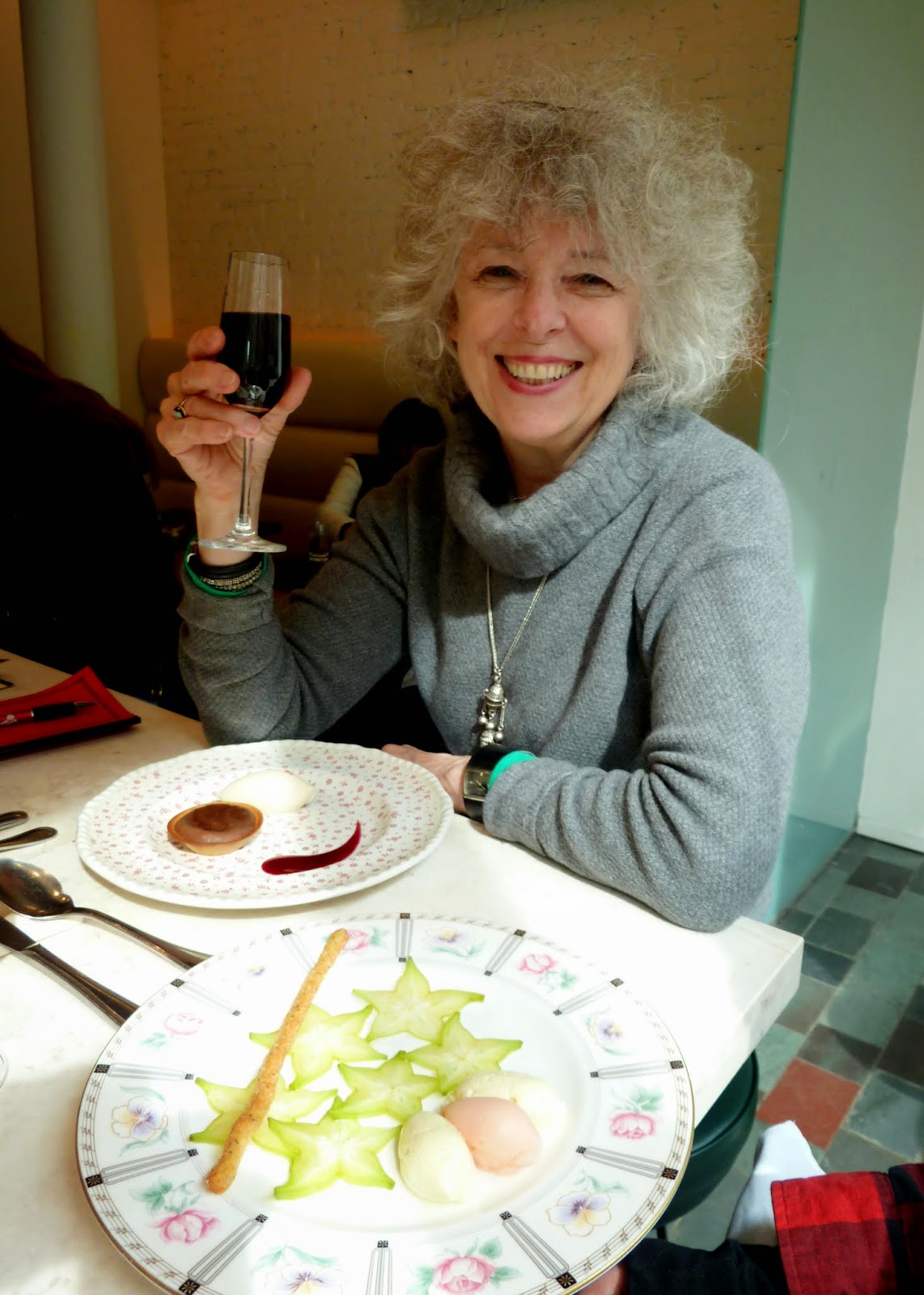 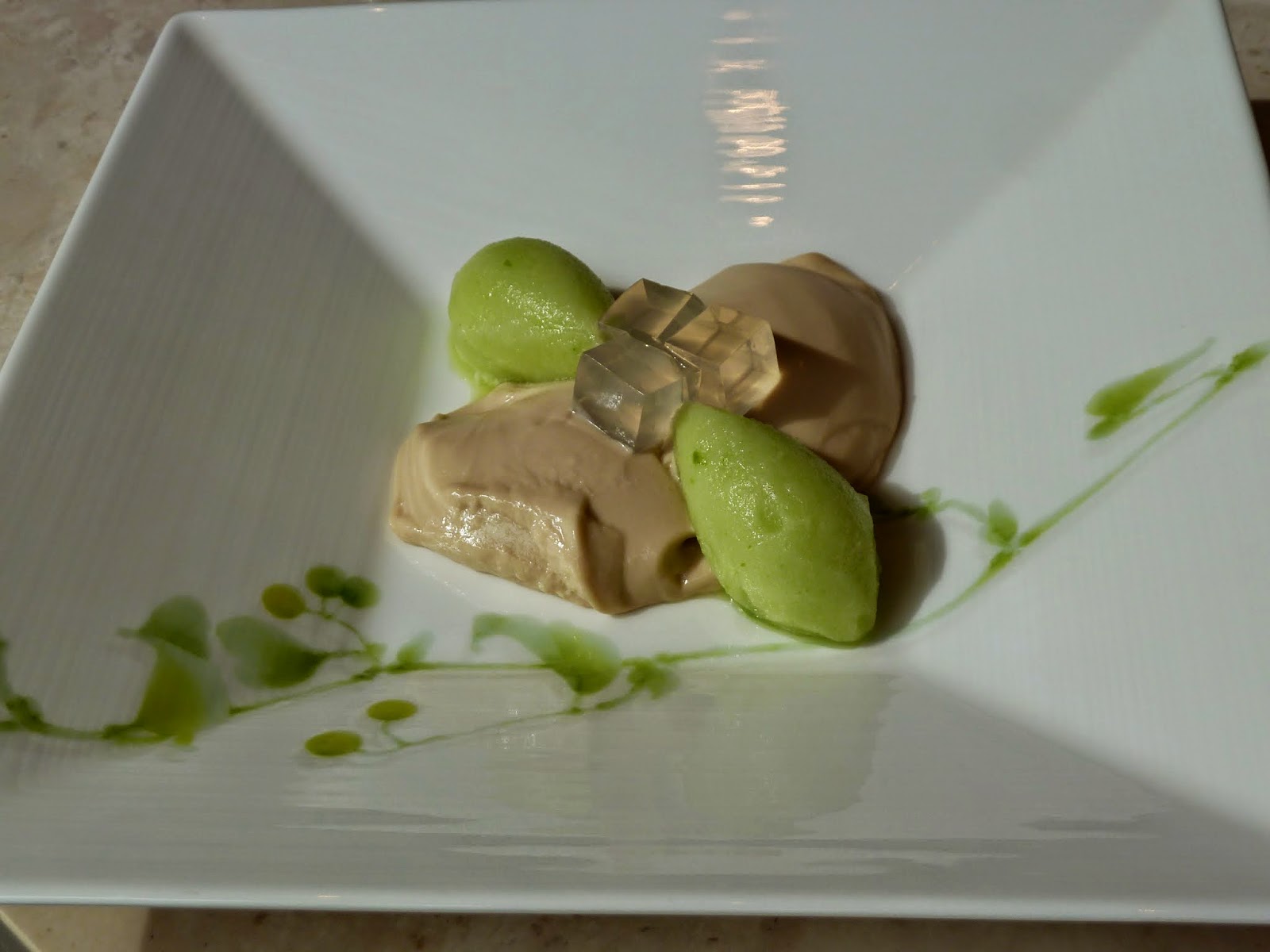 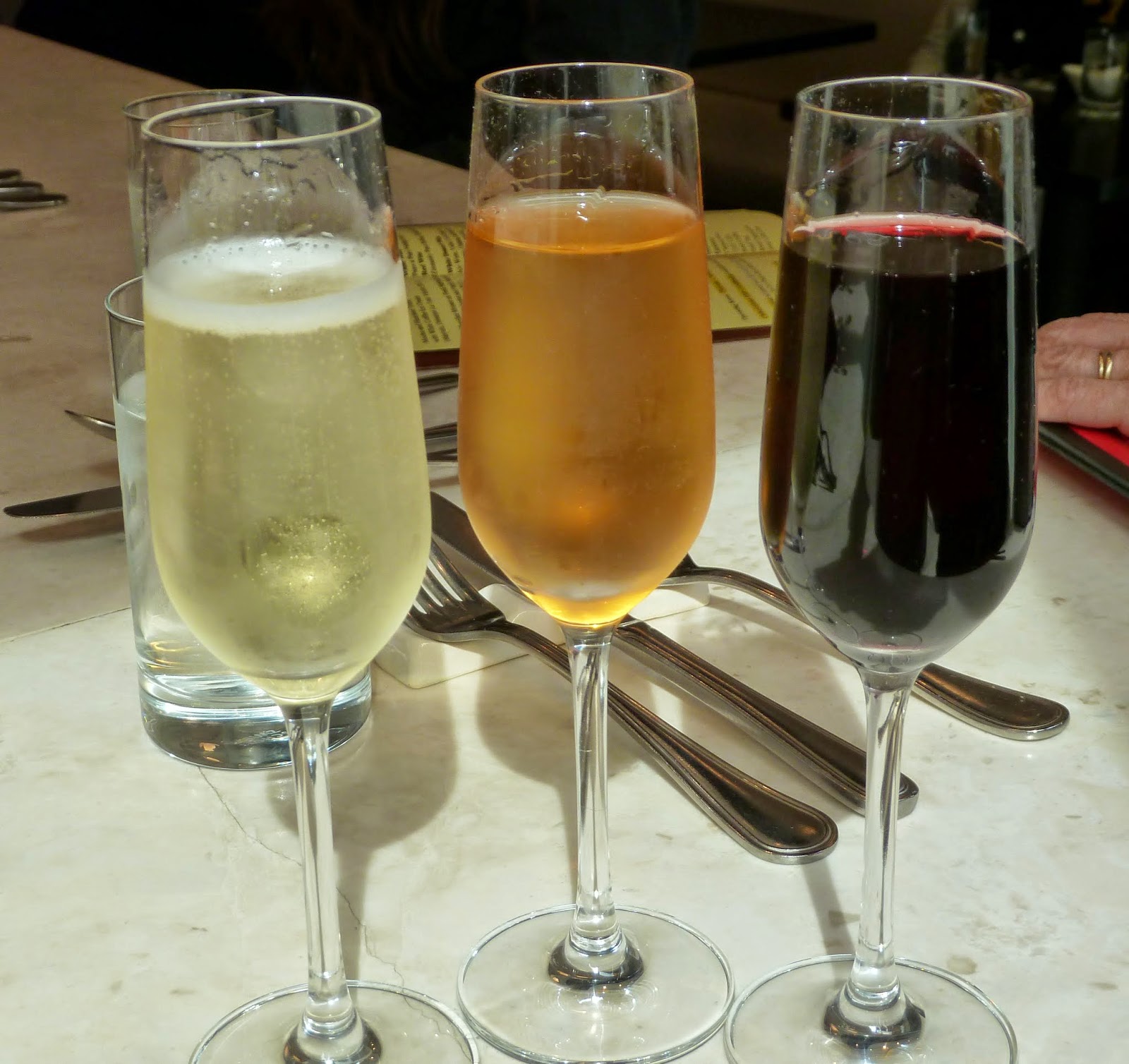 A fellow pilgrim to this dessert mecca ordered the other dish I'd been tempted by, Pineapple Banana Tartare with Vanilla Anglaise on Crispy Kataifi with coconut sorbet. 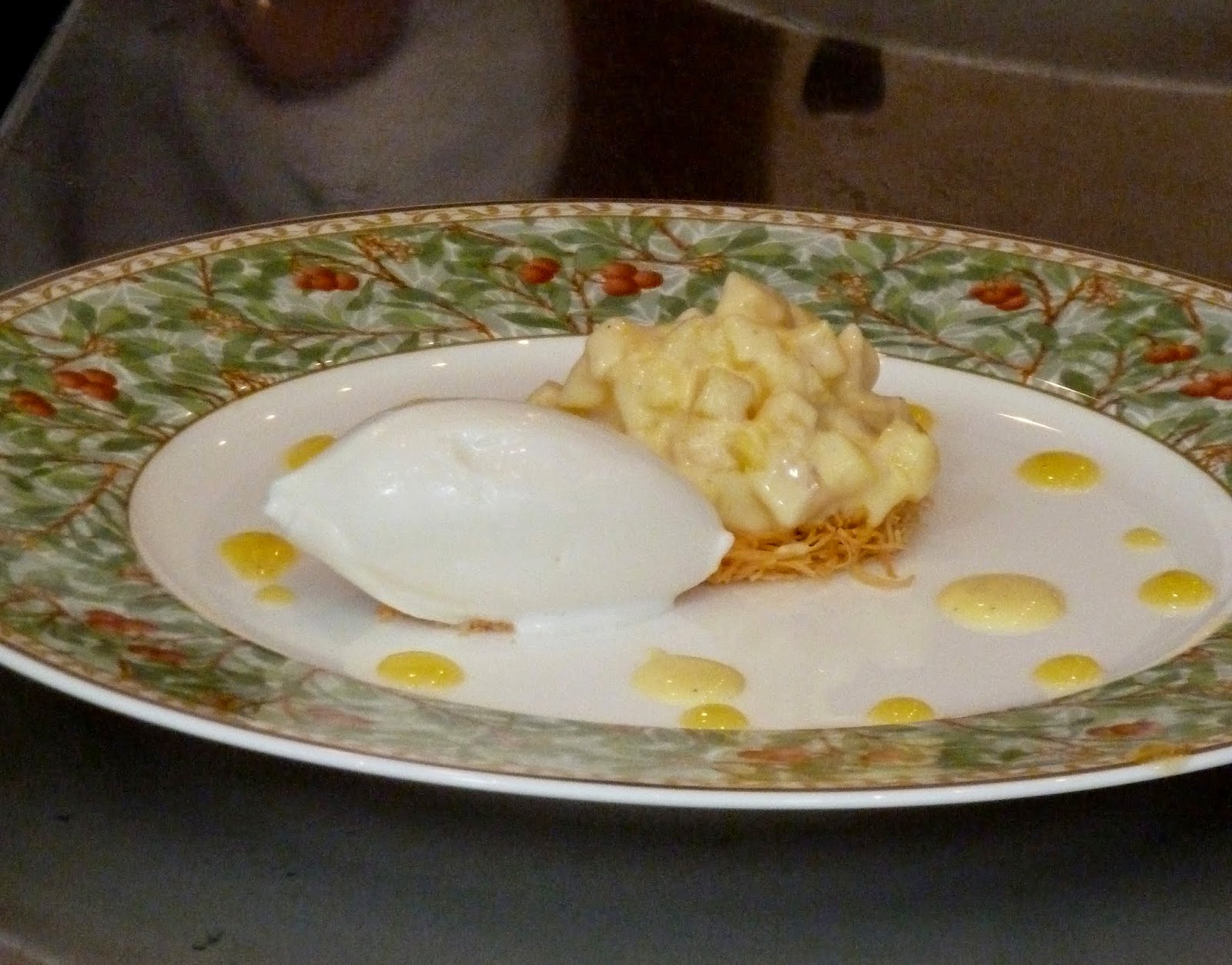 As a further demonstration of her culinary skills, Chika served up a final plate of petits fours for the three of us to share. 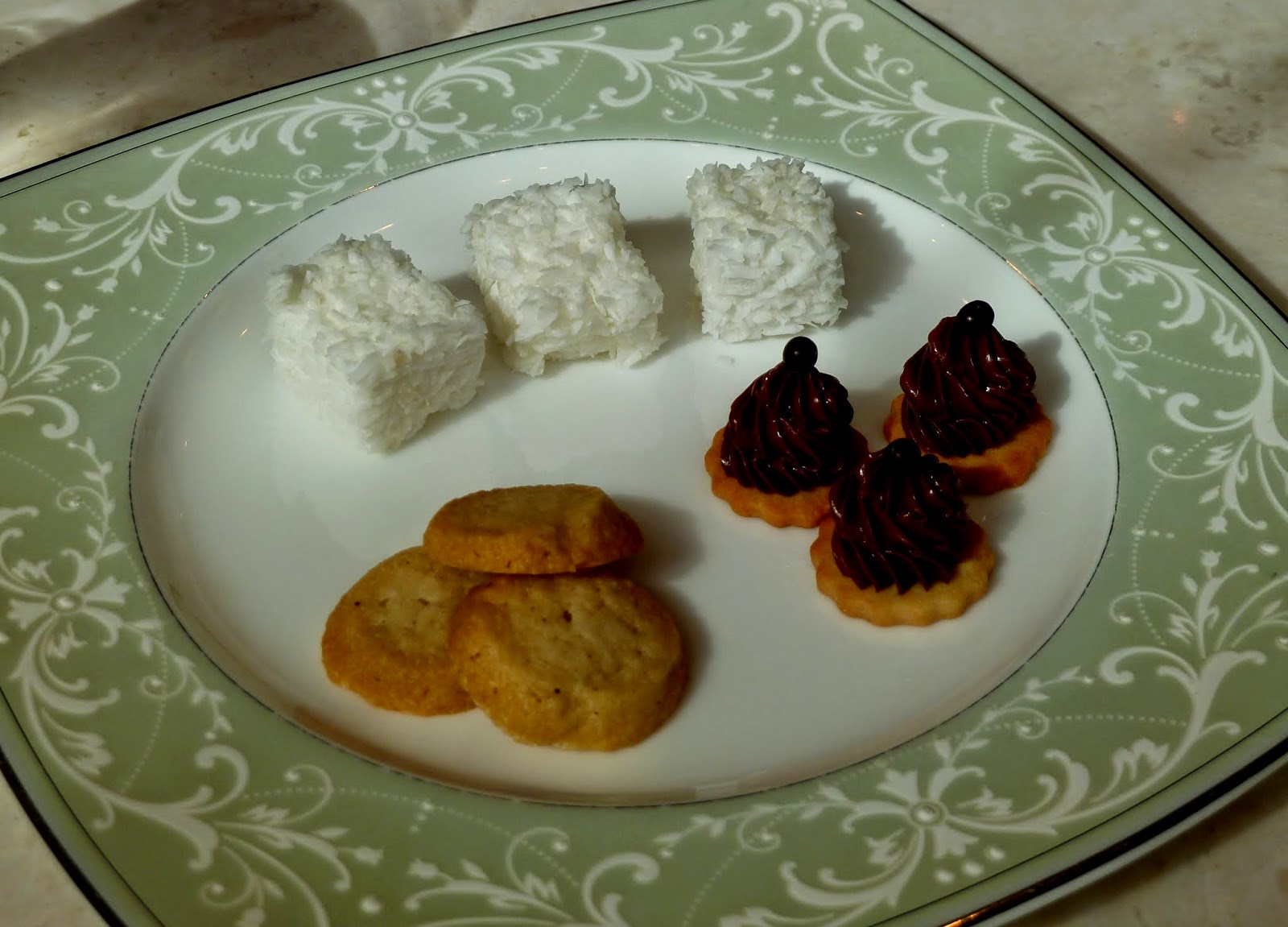 Who would have guessed that behind this simple exterior awaited such sophisticated delights? 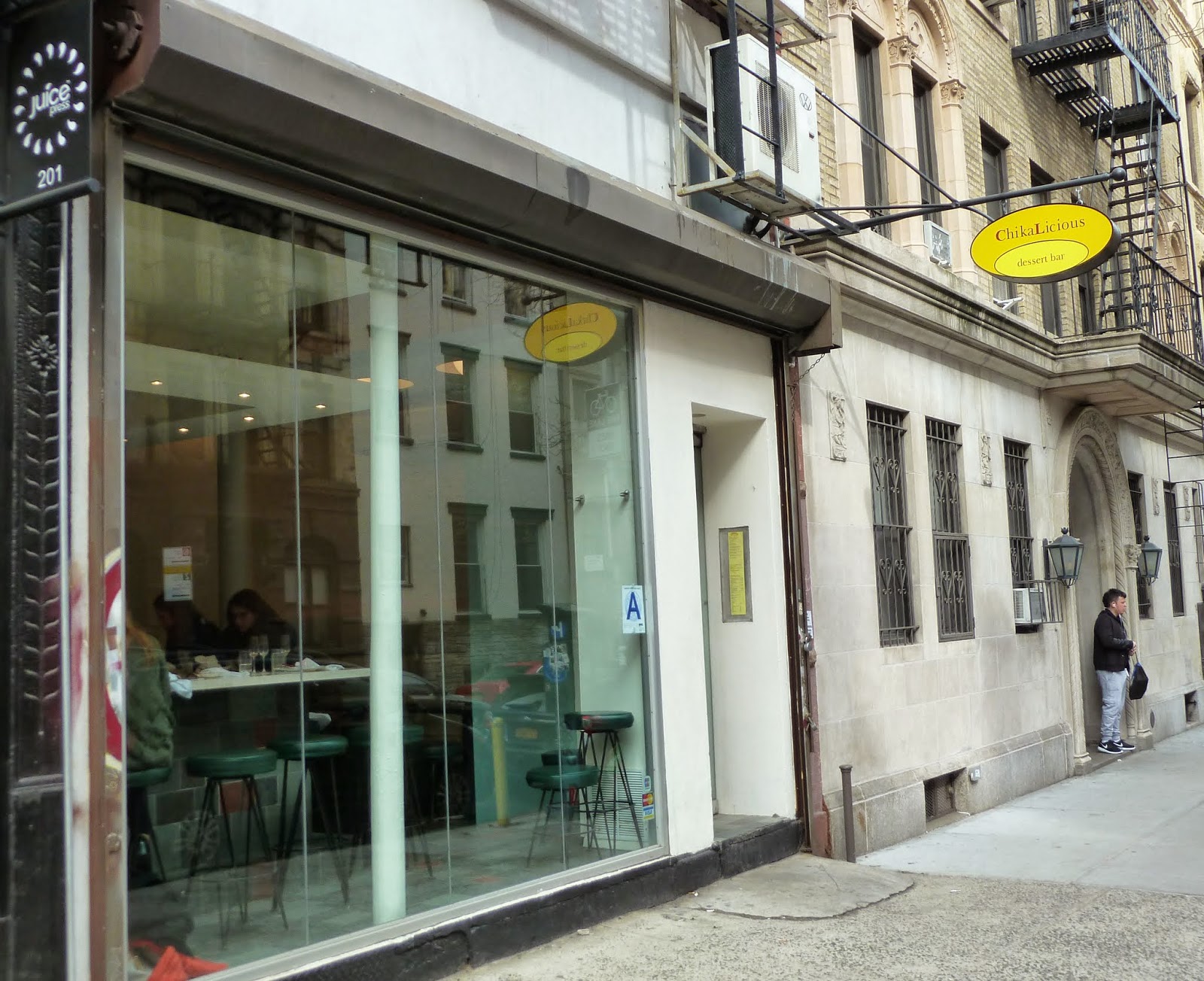 I thought we were then wending our way home, but it turned out there was another destination en route, Il Laboratorio, home to some of the best sorbet I've ever eaten. In for a penny, in for a pound, I had the whopping four-flavor sampler. After a taste of Michael's sorbet at ChikaLicious, my first choice was a green apple, accompanied by tangerine, orange and lemon ginger. All were superb, exactly the icy, emulsifier-free sorbets I like best. Husband and daughter were more abstemious. Michael had salted caramel and chocolate ice creams, Kate chocolate chili ice cream and cucumber sorbet. Overstuffed though we all were, we couldn't resist sharing one more unusual offering, black sesame seed ice cream, as delicious as all the rest. 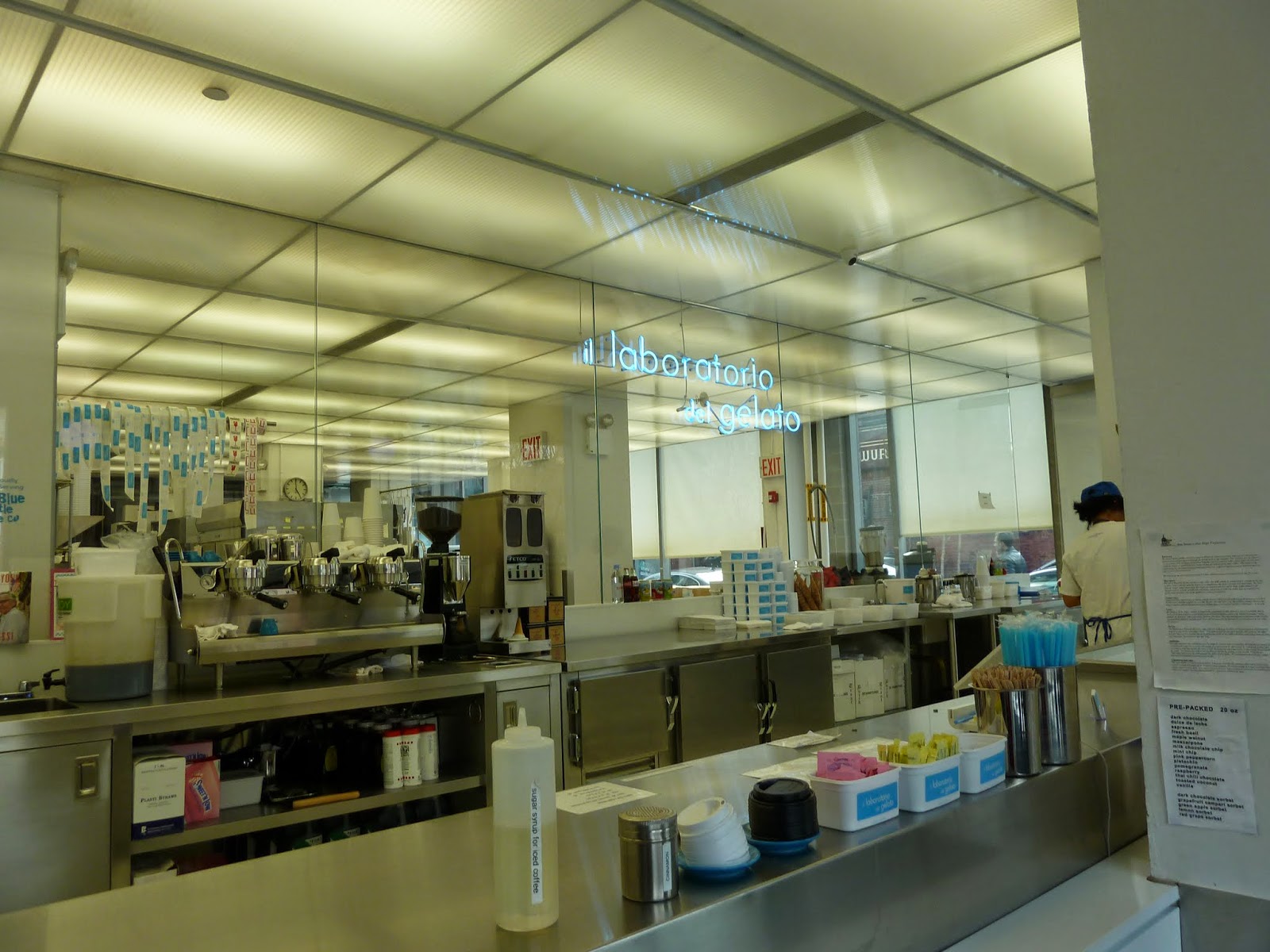 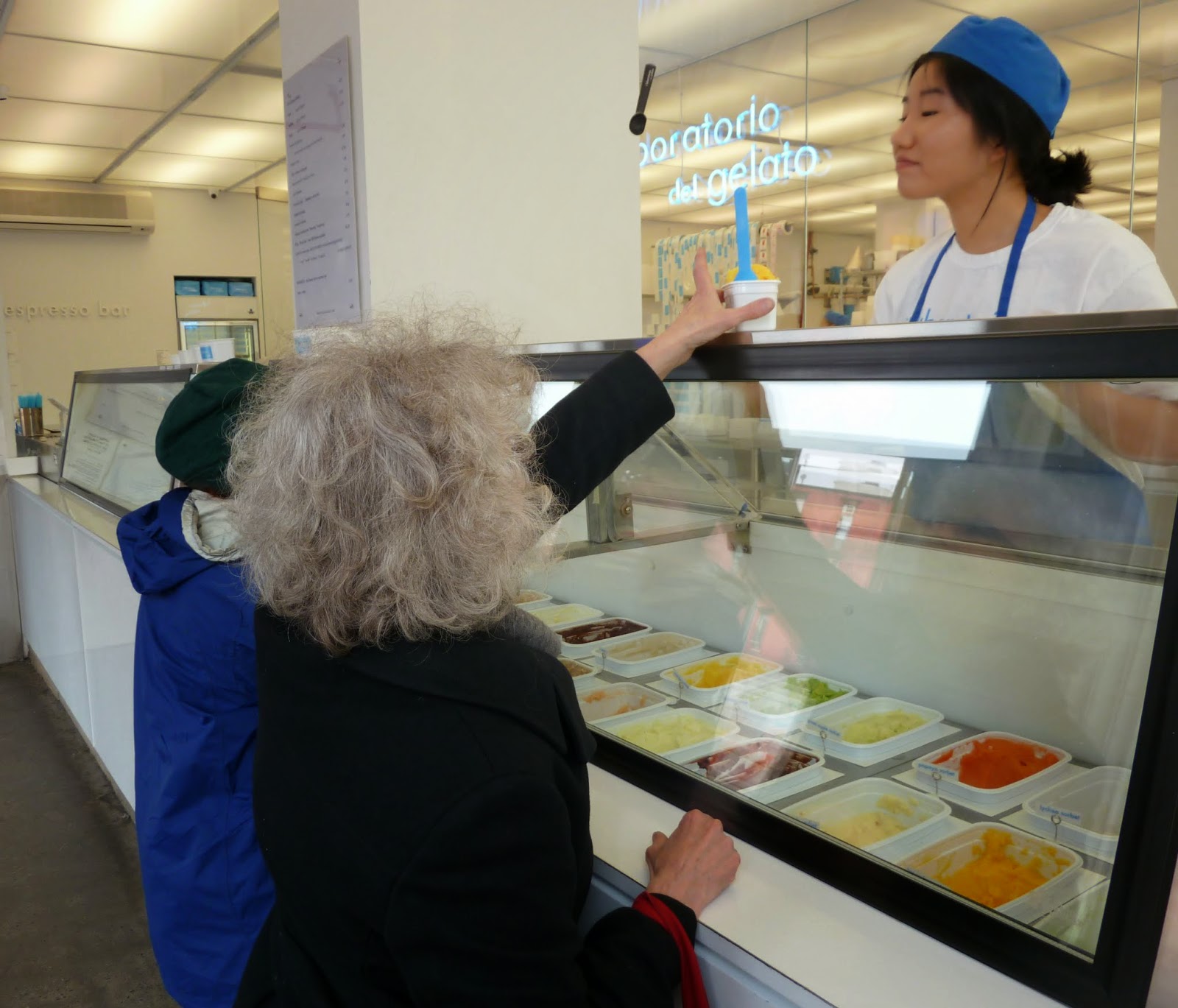 Posted by magpiemom at 12:58 PM No comments:

In his review of Alex Bellos's new book on numbers, Simon Singh chooses one (not mentioned in the book) as his favorite.

"All prime numbers are special, because they have no other numbers that will divide into them (except 1 and the number itself), but 1,000,000,000,000,066,600,000, 000,000,001 is particularly special because of its demonic structure. It is named in honour of Belphegor, one of the seven princes of hell, in order to acknowledge that the number contains 666 (the so-called Number of the Beast) at its heart and has 13 unlucky zeros on either side."
http://www.theguardian.com/books/2014/may/04/alex-through-the-looking-glass-review-bellos-maths-demon

Singh has also suggested that the math boffins who work on "The Simpsons" see their way to including Belphegor's prime in an episode: http://www.bbc.co.uk/news/magazine-24724635
Posted by magpiemom at 7:36 AM No comments: