In order to see the place names, you'll probably have to click on the above map that Michael put together to show our itinerary. I'll put this at the top of each "Grand Tour" blog post so that I, if no one else, can keep track of where we are, where we've been, and where we're going. I had a hard enough time remembering when we were actually en route. Thank heavens for Valerie: we named our Garmin sat nav with her posh British accent after the dance teacher Michael was in love with at about nine years old.

Our trip started with a train ride to Portsmouth (for future reference: destination for coming & going should be Portsmouth & Southsea, not Portsmouth Harbour), where we spent the night at the cheap and cheerful Ibis Hotel before catching a ferry to Cherbourg the next morning. The poor waitress behind the hotel bar that slow Sunday evening had the unenviable task of being chief cook and bottlewasher as well as taking orders. As someone who waited on tables during college, I'm generally a pretty good tipper—especially by British standards—but this girl deserved even more than I usually leave. Somehow she managed to produced a pretty good pizza for Michael and a really good risotto, complete with shaved rather than grated parmesan, for me. The wonders of modern microwaving!

Our 6 a.m. wake-up call the next morning didn't come through, but Michael's alarm clocks, external and internal did, so we were up by 5:35. A taxi took us to the ferry terminal, where we were whisked quickly through into a waiting room and shortly after onto the boat. We haven't crossed the channel by ferry since boarding the hovercraft we took with my parents and Geretha for Cheri and Hans-Jörg's wedding.

While I was impressed by the croissants, fresh-squeezed orange juice, and comfortable seats (so different from Ryanair), Michael was pacing the deck for the best views of the mighty show of naval vessels in the harbor. As the ferry pulled away, we caught a glimpse of Nelson's Victory (better images plus history at the HMS Victory website) . . . 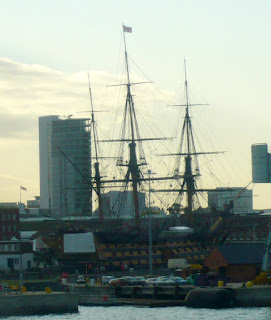 . . . in stark contrast to the sleek lines of a modern warship: 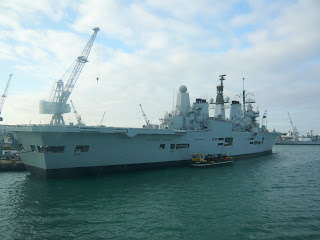 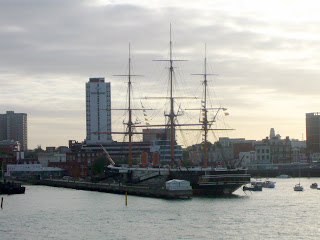 Even older than the Victory is the Mary Rose, Henry VIII's flagship that sank during a battle with the French fleet in 1545. All we could see of this was the huge plastic tent under which restoration work is still being done after its discovery (1966—before divers knew exactly which ship they had found) and removal from the seabed (1982).

A reminder of the ongoing animosity between England and France is this fort, one of several in the Solent (a quick look at images on Google makes me think this is Spitbank Fort). We assumed the forts dated from the Napoleonic Wars, but no, they were built over about a twenty-year period from 1860. One forgets how recently these two nations, staring at each other across the Channel--or La Manche--have each considered the other a dangerous enemy. 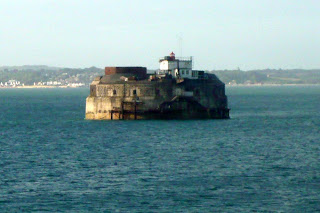 As an aside here, the story, perhaps apocryphal, that I've always felt best embodied this Anglo-French rivalry is the sad tale of the Hartlepool (pronounced Hart-lee-pool, as Michael just corrected me) monkey. I'll just copy the saga off the town website. Even today, their football team is nicknamed the "Monkey Hangers."

The best known tradition and legend associated with the fishermen of Hartlepool is the story of the hanging of the monkey. Tradition attributes this legend to the Napoleonic wars at the beginning of the nineteenth century. It was a December day and the coast at Hartlepool was subject to a heavy battering of gales and snow, through which a French vessel called the Chasse Maree could be vaguely seen just off the Hartlepool headland.

The fisherfolk of Hartlepool fearing an invasion kept a close watch on the French vessel as it struggled against the storm but when the vessel was severely battered and sunk they turned their attention to the wreckage washed ashore. Among the wreckage lay one wet and sorrowful looking survivor, the ship's pet monkey dressed to amuse in a military style uniform.

The fishermen apparently questioned the monkey and held a beach-based trial. Unfamiliar with what a Frenchman looked like they came to the conclusion that this monkey was a French spy and should be sentenced to death. The unfortunate creature was to die by hanging, with the mast of a fishing boat (a coble) providing a convenient gallows.

In former times, when war and strife
The French invasion threaten'd life
An' all was armed to the knife
The Fisherman hung the monkey O !
The Fishermen with courage high,
Siezed on the monkey for a French spy;
"Hang him !" says one; "he's to die"
They did and they hung the monkey Oh!
They tried every means to make him speak
And tortured the monkey till loud he did speak;
Says yen "thats french" says another "its Greek"
For the fishermen had got druncky oh!

Back to our trip.

The port of Cherbourg is not in any way romantic. I've put the film Les Parapluies de Cherbourg (The Umbrellas of Cherbourg) in my Amazon shopping cart to see if that 1964 musical shows any of the rather seedy reality we were looking at in 2009.

The good news was that the ferry was a bit early and we arrived in Cherbourg before noon—critical in France since everything shuts down then for a two-hour lunchbreak. The bad news was that Michael left a file in the car rental office we were driven to that had all our reservation documents for the trip. He realized his error before we drove off, but in those few minutes, the agent had shut up shop. Two hours to kill. . . . [I, of course, was not-so-secretly delighted that it was my husband who had made a mistake for a change.]

This turned out to be a most providential bit of absent-mindedness. Because we were freed of the compulsion to get straight on our way to Brittany, we were able to head west to the Normandy beaches. Our good friend Chet Bonar, born on 14 September, was on Eisenhower's staff for Operation Overlord, so the timing couldn't have been better.

I'll let these moving images speak for themselves. You can't look at the wide, flat beach codenamed Utah (we'll be visiting Omaha, scene of the far bloodier landing in Saving Private Ryan, on our way back, and possibly Sword, Gold, or Juno) without thinking of all the Allied soldiers who stepped onto these forbidding expanses and others like them on D-Day, known as Jour J in France. One of the reasons "only" about two hundred servicemen lost their lives at Utah fits in with what you were telling me, Dad, about the effect the weather had on amphibious tanks on 6 June 1944:

DD tanks: Nearly all of these swimming tanks made the beach because they were launched half as far out as at Omaha and were able to steer into the current more effectively to avoid swamping in the rough seas. [Wikipedia]

The German pillboxes in our photos were a bit inland, not right on the beach. The landing here was accidental—and lucky, given the weak defenses. Strong currents swept the landing crafts a mile south of their intended destination. 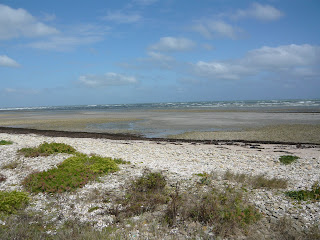 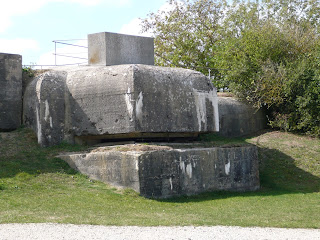 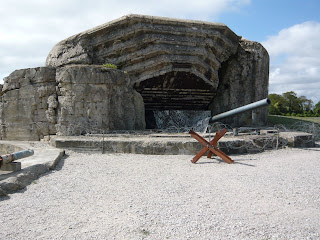 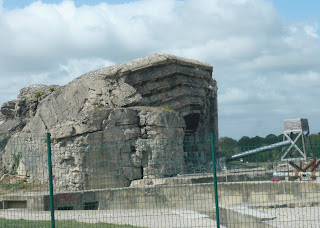 With French and US flags flying on either side, the top inscription on
this memorial reads (literally and stiltedly translated line by line):
6 JUNE 1944
DISEMBARKED
AT DAYBREAK THE
ALLIED ARMIES
The second part of the inscription honors French general Leclerc, who arrived with his 2nd armored division on 1 August. Although there's a lot of controversy over whether Eisenhower held Patton back so that the French could themselves liberate Paris, it seems to be universally agreed that LeClerc is the outstanding French leader from that period, even though we Americans have usually only heard of de Gaulle. For a bit more about this honorable man (I can't find a properly biographical site), click here and here.

After a quick omelette at a small café in Quinéville, we headed back to the National Citer office for our file. The countryside in this part of Normandy is very like Dorset. Unfortunately we didn't take snaps of some of the lovely stone farmhouses we passed amidst hedgerows and sunken lanes, thinking they'd be the first of many. Wrong. We never saw anything like them again.

Our target, like Patton's, was the town of Avranches, where Michael had arranged for us to stay in a 17th-century relais du poste, or coaching inn, the Hôtel de la Croix d'Or. It was charming, though our room was oddly like a time warp from the brown-dominated 1970s: 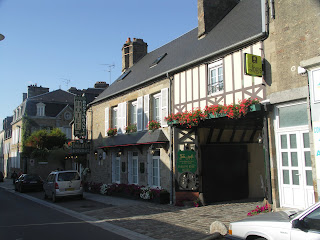 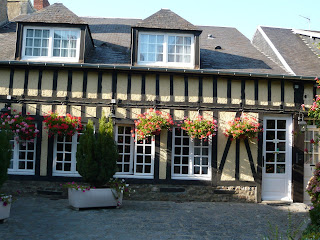 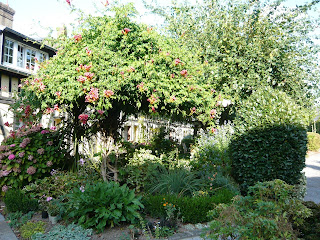 Before dinner, we strolled over to the Patton memorial. The inscription there begins (in French):

THE GLORIOUS
AMERICAN ARMY
OF GENERAL
PATTON
FROM 31 JULY
TO 10 AUGUST
1944
ACHIEVED THE
BREAKOUT
OF AVRANCHES
When we were standing in the square where the monument was erected, we were literally on American ground: soil and trees were shipped over from the States. The bust of Patton ("General Patton, 1885-1945, Liberator of Avranches") was a later addition, dedicated in 2004. 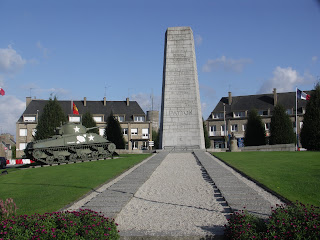 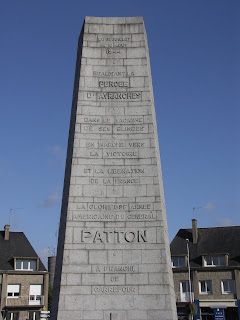 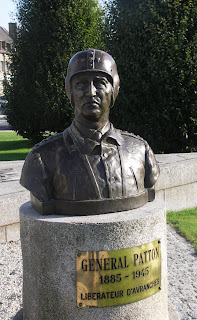 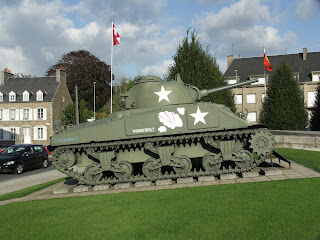 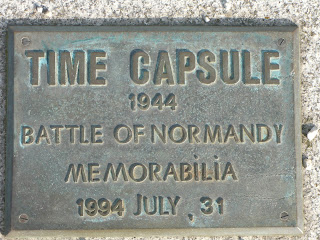 Soon it was time for dinner, the first of several demi-pension (half-board) meals on this trip. And the first was one of the best. 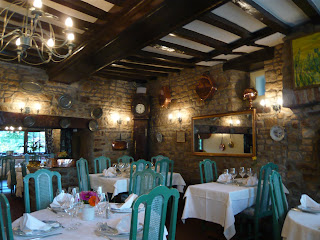 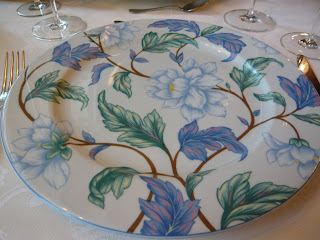 The charger plate, which disappeared (I think) even before
our amuse-bouche of duck à l'orange tartare arrived 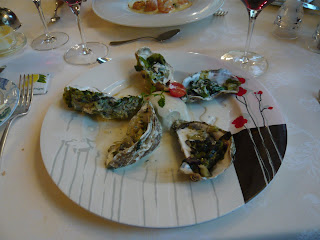 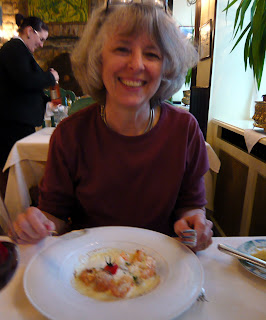 Langoustines and mushrooms in a champagne cream sauce

We didn't photograph our main courses, Michael's filet de bar, bass in yet another lovely sauce, and my pigeon. Mine was the weakest link in the meal, but what can you expect if you order one of Woody Allen's "rats with wings"?

Michael had a cheese course. Years ago I smiled when an aristocrat in Diane Johnson's Le Divorce commented that French culture had died when menus were printed with fromage ou dessert instead of fromage et dessert (or vs. and). Well, in this part of France culture is alive and well; both were on offer as part of our fixed price meal. The two cheeses that we now need to look out for are Coutances and Gaperon. Michael finished our bottle of a 2006 Sancerre, a red (pinot noir) rather than the more customary white.

For dessert, Michael had a fabulous apple and Calvados sorbet. I ordered "le délice Normand," which turned out to be a tart filled with caramel and cider mousse, with (in the small glass shown) a fabulous syrupy fruit concoction of flambéed apples, caramel, and Pommeau. Tiny meringues and chocolate mousse cups then appeared with Michael's coffee. The waitress's cheery "bonne continuation" early on in the evening had been an understatement of what was to come. 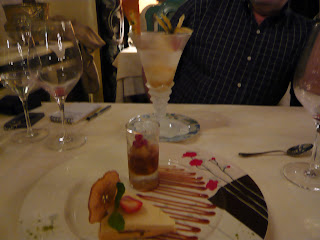 Posted by magpiemom at 8:18 AM