The end is nigher than ever, Michael's father used to say, and I'm getting there at last with my California recollections. This and one more short post on our final day should do it, since I've already written up the Outstanding in the Field event. We leave for Portsmouth tomorrow, catching the ferry for Cherbourg on Monday; I'm determined not to have this trip still hanging over my procrastinating head as we embark on another.
We hadn't been to Monterey since a visit to the aquarium when the kids were little. This time we didn't see the marine creatures, but we did have a great view of the bay from our window in the Spindrift Inn (room 406 should we ever be lucky enough to stay there again). 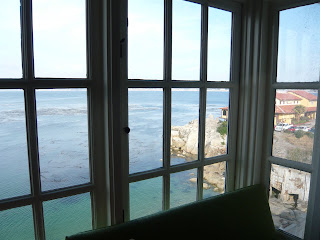 For a description of the submarine canyon that was lying under these gently lapping waves, go to throughthesandglass (http://throughthesandglass.typepad.com/through_the_sandglass/2009/06/the-monterey-submarine-canyon---continued.html)
Although it cost over $100 less than our Ballard Inn accommodation, this room was the nicest of all our overnight stays in California. It would be wonderful to settle in here in late autumn/winter with a roaring fire in the hearth. 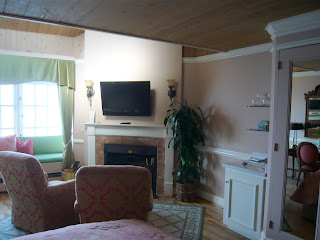 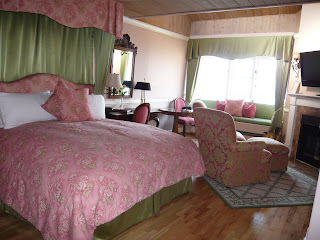 Monterey itself, however, is a pretty tacky town. Our Time Out guide to California was bracingly rude about the crass pandering to tourists in search of former times, whether nautical or Steinbeckian. We had trouble finding a decent place to eat, but eventually had a more than adequate dinner of crabcakes (my order for the nth time—with UK fishcakes invariably stuffed with potato filler, I can't get enough of the US variety) and swordfish at The Whaling Station.

The pimp-your-truck ethos is strong here. Should you ever decide to give Dean a makeover, Kate, here are some pointers: 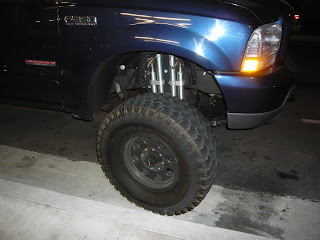 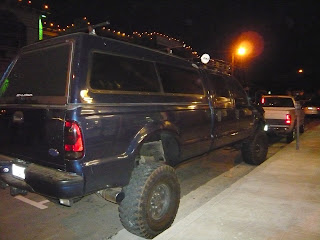 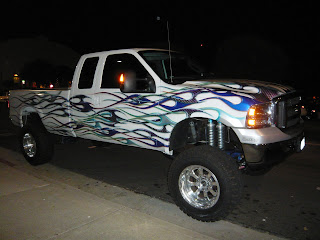 The real discovery of the evening was right near the hotel. We had to stop, for obvious reasons, when we saw this shop was still open after dinner: 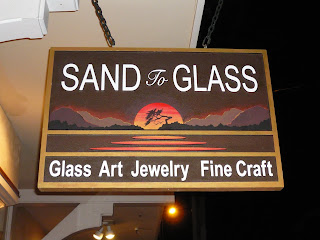 We watched a video on sand picture construction and Michael eventually got up the nerve to mention Andrew Clemens and his sand bottles ( http://throughthesandglass.typepad.com/through_the_sandglass/2009/01/grainbygrain-2-the-amazing-sand-bottles-of-andrew-clemens.html) to the owner/artist behind the counter. David Alcala was so pleased to have a customer mention Clemens for the first time ever that he gave Michael two fulgurites, which then prompted Michael to rush back to our hotel room for a gift copy of Sand. We bought Kate a lovely $34 glass pendant—but I shouldn't say "bought" since we couldn't get David to accept the money, even though I pride myself on winning this sort of face-off. 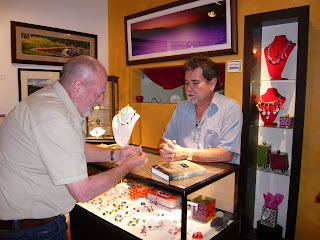 The next morning we had continental breakfast in our room. Then, while waiting outside the hotel for our car to be brought, we overheard a father-son exchange that made our day. Mom and Dad were walking along with their two little boys and just as they passed us, Dad bent down to one of the lads to say, "Long ago we had something in this country called racism . . . Abraham Lincoln put things right." Would that history—and the present—were so simple. Even so, it was uplifting to think that sort of comment could be made today so casually.

With quick stops at Marina State Beach and another Borders (still no Sand), we got to the Durant Hotel in Berkeley in plenty of time for our noon-ish rendezvous with Dore, Michael's editor at University of California Press, and her husband Gene. The hotel is elegant, but its austerity is subtly mocked by its collection of artifacts from the glory days of student rebellion. There are "Folk You" and "Draft Lodge" buttons on display, along with a partially burnt lacy bra. The photo in our bathroom showed a young couple running while throwing off their clothes. It looked like a snap from Woodstock but was probably taken rather closer to the Berkeley campus.

First Dore and Gene took us to the Press offices: 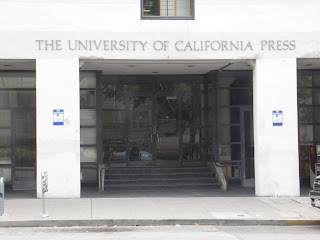 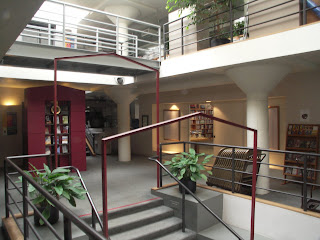 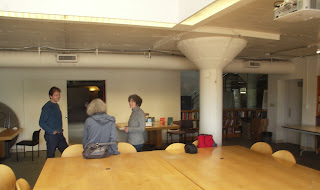 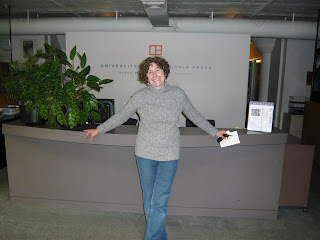 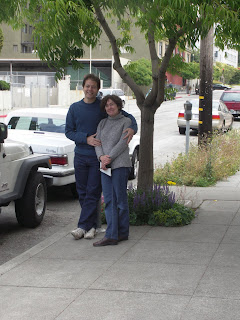 Dore did the planting around the Press's sidewalk tree,
in marked contrast to the weeds growing elsewhere along the street
We then picked up box lunches from Grégoire's in the "gourmet ghetto" of Berkeley and headed out for Point Reyes. The first photo was taken on the Earthquake Trail, where the displaced fence marks slippage along the San Andreas fault that occurred during the massive earthquake of 1906. 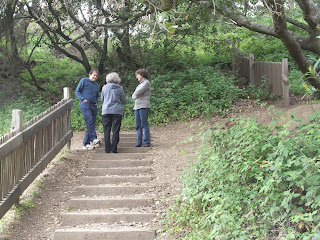 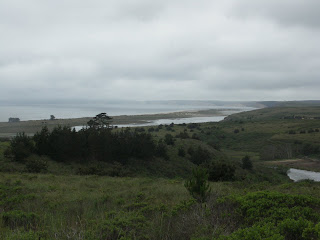 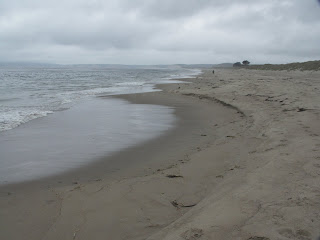 With the exception of Dore's being reprimanded by a park ranger for driving too fast (surprising—we all thought we were crawling), the afternoon was a perfect blend of scenery and conversation. We learned that their daughter Jenny, whom we had met in London, secured a language grant to study in Denmark and has fallen in love, via Skype, with a Puerto Rican specialist in Icelandic. Son Nick can be seen as Luke in the webcast "The Lake." Can be seen in the States, that is. It's unavailable for viewing elsewhere in the world, so we've been thwarted in our attempts to check out the aspiring actor's cyber calling card.

I was able to access the amusing youtube parody on the Danish language Gene told us about (http://www.youtube.com/watch?v=s-mOy8VUEBk). Apparently kamelasa (reproduced here minus accents; phonetically it's kah-mah-LOH-zoh) has become a family catchword.

We had an early dinner at the Station House Café on Hwy1, soft shell crab sandwich for me, Michael ribs, Dore and Gene steak. The food was extremely good, but the main reason for eating there was to get to taste a 2006 A. Rafanelli zinfandel from Healdsburg in Sonoma. This was without question the best wine we had on our trip. It isn't available in retail outlets, since the family only sell to restaurants and to customers who make the trip to the vineyard.

After Gene and Dore dropped us off at the hotel, we strolled around the campus to have a look at the famous campanile and see if Michael could recognize any buildings from the summer he lived there with his parents. A lot had changed since 1961, when he first heard Dylan on a jukebox in a Telegraph Avenue café.

The next morning we drove into the foothills to find the house on Boynton Avenue the Wellands had rented. Michael is pretty sure this is the one, a modernist revelation for a family used to a 1930s semi-detached in suburban Manchester: 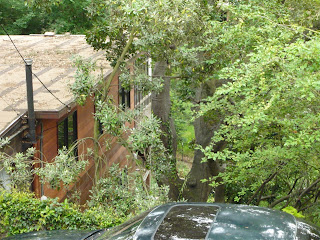 Michael next indulged my habit of checking out supermarkets when we're on vacation. I had zeroed in on Andronico's and it didn't disappoint, with a wine aisle even M. was impressed by, plus a prepared foods counter and bakery to equal those in London. I picked up a bag of "chocolate chips," cocoa-infused tortilla chips dusted with sugar and sea salt, to take back to Lansdale.

After buying Michael a Berkeley sweatshirt in case it was cold at the Denevan feast later that day, we made a beeline for Santa Cruz. The sun was shining, so we had a deli lunch at a table on the sidewalk—and even outside Michael wasn't allowed to smoke. Santa Cruz is very spruce, in part because it was significantly rebuilt after the 1989 Loma Prieta earthquake. If you were watching the World Series that year, Dad, you may remember that this was the first time an initial earthquake jolt was shown on TV as the Oakland Athletics and San Francisco Giants were warming up at Candlestick Park for their third game. No one died at the ballpark, but the earthquake caused 63 deaths and billions of dollars in damage. I guess the documentary Michael used to show to his geology classes at Wayne State back in the 1970s was well named: "San Francisco—The City That Waits to Die."
Posted by magpiemom at 9:44 AM