On Friday afternoon we set off for Maida Vale. Our eventual goal was to meet up with our old friend Coreen, who is head of the American School in St John's Wood, but we figured we'd fit in a bit of gastronomic shopping first. Several years ago a friend who is a judge in San Francisco had alerted us to a wine tasting at a shop on Clifton Road; Cindy is an anglophile and had signed up to a news flash service on London events. Less extravagant than on our last pre-Christmas visit, we bought just one relatively modest bottle of pinot grigio (the pinot noirs that Michael really likes were too expensive) at The Winery and then explored the wonderful deli next door. In other words, this long-postponed rendezvous was also an excuse to treat ourselves to a few indulgences. 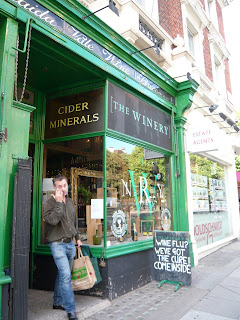 Click to read their "wine flu" sign; shop
may look a bit shabby, but its selection and prices aren't

Here's a view of the residential part of Clifton Street—rather different from Southwark Bridge Road: 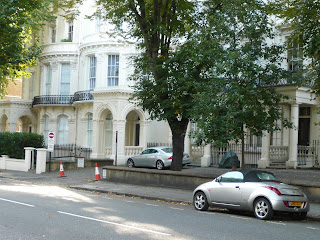 This seems a good point to paste in a photo I forgot from our Tate to Tate boat trip the previous Monday. Michael says this must be the ship that he's always referring to in remarks like "When my ship comes in, we'll go on a wine tour in Brazil and Argentina." Previously he's said the ship is a rusting hulk in Bangalore, so the outlook seems to be brightening. 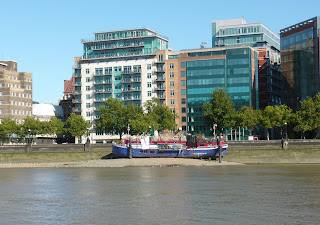 The deli, Raoul's, was terrific. We can't let years elapse again before we board a Jubilee or Bakerloo tube and head north. You do have to raise your eyebrows at potato salad that works out at £4 for a small container, but it was superb, like everything else we loaded up on. Coreen said we should also have stopped at nearby Baker & Spice for bread, croissants, and muffins. Another note to self: don't forget the organic deli across the street, where we bought a spinach & garlic dish, granola, seeded oatcakes, and unusually tasty potato chips.

There was a faculty gathering at one of Gordon Ramsay's gastropubs, The Warrington, due to finish around six. For those who haven't heard of GR, he's a famously profane chef, with several Michelin stars and television series to his name. The pub is housed in an old hotel-cum-brothel, now no doubt restored beyond its former glory. 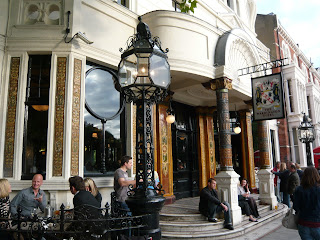 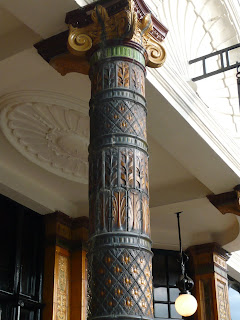 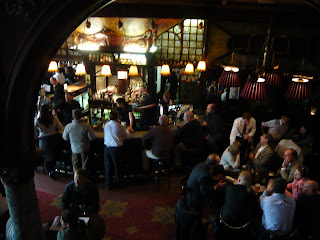 Michael bought himself a pint of an Adnam's ale he'd never tried before and then the three of us wandered off to St John's Wood. We had a reasonable and tasty dinner at Sofra, a Turkish restaurant similar to one of our local favorites, Tas, and managed to pry out from Coreen what her extremely accomplished children are up to. Explaining that Tyler and Molly are "very hard workers," she revealed that her son had finished his post-Stanford Gates Fellowship at Cambridge and was now teaching in inner city schools in LA and Newark (the latter under the aegis of Cory Booker), while her daughter had snared a Fulbright after Harvard and spent the last year in Ireland, where she has fallen in love with an Irishman as well as the country she's been besotted with for years. Coreen's husband, a professor at Berkeley (civil engineering, Dad), died when he was in his forties and Coreen in her thirties, so we're looking at the results of single parenthood here.

After dinner we strolled to take a look at the wonderful residence provided for the head of the school, which Coreen has managed to make cozy rather than austere. Her furniture from California has been supplemented by a few nice antiques, but the main addition to her goods & chattels has been two lovely paintings by Vanessa Whitehouse. She has one seascape and one orchard scene. Go to this link for an idea of what the oils look like: http://www.quantumart.co.uk/artists/vanessa-whitehouse.html. Two of the sold canvases might even be hers; they certainly look like those we admired.

Another of Coreen's treasures is this photograph from the Obamas' visit to London. The American embassy wasn't big enough to host 1000 people, but the school was. Coreen is on the right. 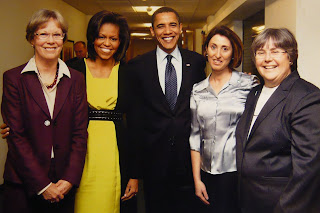 Posted by magpiemom at 2:23 PM