Finally—I too qualify as a fairy tale princess 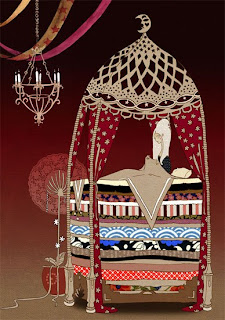 I know Michael can identify with this rueful remark (in bold type, last paragraph) by Thomas Sutcliffe in a short piece from The Independent.

I don't think John Lewis should worry too much about the mischievous ad campaign that suggests people should take advantage of their customer service to research a purchase and then buy it online instead (the competitors shall remain nameless as punishment).

I mentioned this casually to a group of colleagues and provoked a spontaneous clamour of indignation on the store's behalf, John Lewis clearly figuring in the middle-class heart as an organisation so cherishable you could only match its appeal if you mated a giant panda with David Attenborough.

Shortly afterwards I experienced just why this should be when ordering some bedroom blinds. "You'll have the measurements on file," I told the salesman, explaining that the ones I was ordering were a replacement for a set delivered only a few weeks before that had turned out to be an unsuitable colour. I could have lived with this error of judgement until the cost was amortized but my wife has higher standards (think princess and pea). "Bring them back in", said the salesmen, without prompting, "and I'll give you half the cost back". Try getting that kind of service from gazunder.co.uk.

Posted by magpiemom at 9:19 AM