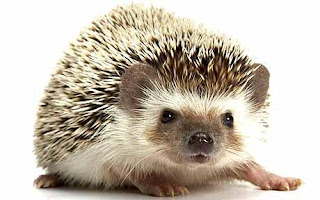 Just a photo of a hedgehog can do that, but this time there's a joke attached, which won the funniest one-liner prize at this year's Edinburgh Festival.

''Hedgehogs. Why can't they just share the hedge?'' Dan Antopolski, 36, who is known for his surreal stand up routines.

From this link you can also access the runners-up, some a lot funnier than others, and also the most dire attempts at humor amongst the ~7200 jokes that were considered.

What made me laugh out loud, though, was this line quoted in a Guardian review of Sebastian Faulks's new novel on contemporary London, A Week in December. A literary critic has just read a novel written by a rival pundit:

"It was worse, far worse, than he had dared to hope."

The sentiment reminds me of the spiteful but very funny remark Gore Vidal made decades ago:

"Whenever a friend of mine succeeds, a little something in me dies."

For more on the delightfully waspish Vidal, see this 2008 interview in The Independent: http://www.independent.co.uk/arts-entertainment/books/features/gore-vidal-literary-feuds-his-vicious-mother-and-rumours-of-a-secret-love-child-832525.html

As the interviewer points out, through his friendship with André Gide, Vidal is only "one handshake" away from that other witty wordsmith, Oscar Wilde, who famously managed to joke even on his deathbed:

"Either that wallpaper goes, or I do." [exact phrasing disputed]

Posted by magpiemom at 7:11 AM