This could go on forever: Day 2, Part 3, Section 3, Subsection (iv). . . . Now that I've finished the second in the Larsson trilogy and have to wait for the third to be translated, I could be a more conscientious blogger. Not likely to happen, though: I'm always busy in London and here in France our garden would easily absorb every waking minute if I were a perfectionist. Even a fair weather gardener like me can't resist tidying things up a bit in this splendid sunshine. And then, of course, there are all the other books on our shelves. I may even be more ambitious this time and read Daniel Mendelsohn's The Lost: A Search for Six of Six Million, recommended by Jean-François, our friend and gardener, who has tackled it as Les Disparus.

But for now, a return to Barcelona. I had been stunned by the soaring enormity of La Sagrada Familia and amazed by the beauty of individual details, but it really wasn't until we went through the Gaudi exhibition that I appreciated the genius behind the architecture. Despite what might be seen (incorrectly, i.e. by me) as over-the-top ornamentation, he believed that an architect should strive for function not beauty. Nature was his template, and the exhibits showed how he based his designs on trees, crystals, honeycombs, radiolaria, bones, sinews, and how carefully he worked out the critical geometries. He was not interested in the straight lines and planes of a Le Corbusier; these rarely occur in nature, so he focused instead on (and here I quote) helicoids, conoids, hyperboloids, and hyperbolic paraboloids.

As a child he had worked as an ironsmith in his uncle's forge and later studied carpentry, iron casting, and plaster modeling as well as architecture. He preferred building models to drawing plans, though the few examples of the latter that survived the Civil War are also exquisite. Above all he was practical--and so dedicated to the construction of La Sagrada Familia, that as an aging bachelor, he lived in his studio on site; there are poignant photographs of his simple quarters, his daily meal hung in a cloth sack from a hook.

I had forgotten what a catenary arch was--if I ever knew--but you can't walk through Gaudi buildings without renewing an acquaintance with "the curve formed by a perfectly flexible, uniformly dense, and inextensible cable suspended from its endpoints" (for the inverted form, think of the Gateway Arch in St Louis, 630 ft wide, 630 ft high, with the formula for its dimensions etched on the stainless steel). Although he apparently worked out more complex problems like the vault of La Sagrada Familia's nave by other methods, for smaller areas like the bell towers he used weights suspended from threads to model the curves he then inverted to build in stone. The threads under tension perform like stone under compression. 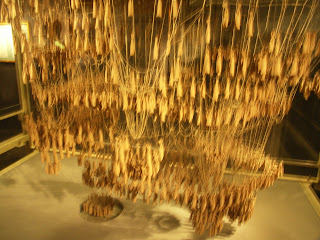 When we went into the beautifully simple school Gaudi had constructed on the church grounds, we saw the exhibit below. Michael turned to me and asked, "Where have you seen this before?" Despite my aging brain cells I managed to remember, since only a week earlier we had seen an architect employ the same layered-tile laminate for the curved roof of an eco house in Kent on Grand Designs (http://www.treehugger.com/files/2009/02/crossway-zero-carbon.php). Do check this link out: it's well worth a look. 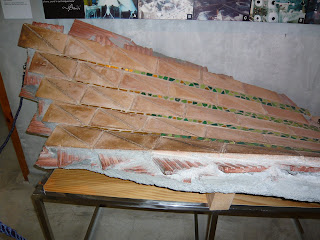 We had hoped to get to see Güell Park and possibly a couple of the other projects Gaudi designed for his most generous patron, but these will have to wait for our next visit. Rather than rush them, we headed instead for the ceramics museum, set in a lovely park (one of Barcelona's few green spaces) next to the university. The displays were actually rather disappointing. Once the graceful Morisco influence waned (Moriscos were the Moors who converted to Catholicism rather than be expelled during the reign of Ferdinand and Isabella), most of the ceramic work was pretty lumpen, with crudely daubed designs. Then one moved on to the eighteenth-century and onward, where the offerings were pretty much what one finds in any British municipal museum. We did learn a new Latin phrase, though, horror vacui, the desire to fill any blank space with decoration. I suspect this is what Orwell saw when he looked at La Sagrada Familia.

Then it was back to the old Jewish quarter, known as the Call, where we picked up a half-price sphere of green prehnita (prehnite in English) in a small jewelry store and, more significantly, noted a far more fabulous mineral shop to explore after lunch. We decided our paella and cêpe risotto were worth the next lengthy wait (just as well we ate late, given what was to happen at dinner).

We retraced our steps to Vives de la Cortada, windows and shelves crammed with specimens that could be in a mineral museum (http://www.vivescortada.com/vivestienda/shopdisplaycategories.asp). Michael's attention was immediately drawn to the meteorite cross-sections showing distinctive cross-hatched Widmanstätten patterns; I now have a small extraterrestrial pendant. And also the stunning raw emerald piece below, far less expensive and far more appealing to me than the gem-quality variety. 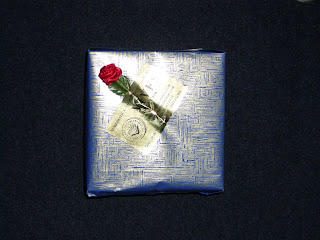 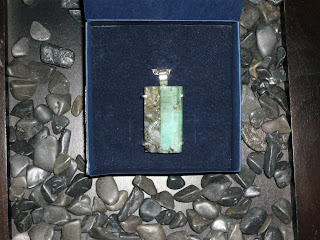 After checking out the sandstone on some of the crumbling old buildings in the Call, we returned to the hotel via a bookshop to pick up a copy of Carmen Laforet's 1944 novel Nada for Emily. As we were flipping through the Gaudi books we'd bought at La Sagrada Familia, there was a knock on the door and l0-- 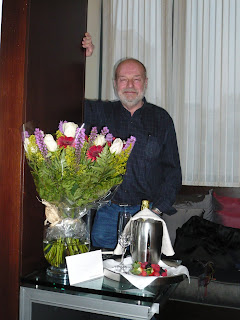 According to Frommer's Barcelona guide, our hotel has the best service in the city. Here was an example of it. When Michael was on his own at the front desk earlier, the charming man who had signed us in commented that he'd noticed on my passport that Wednesday was my birthday. Would Michael like to arrange flowers? Okay, this is obviously something he's trained to check, but it was done with such grace--and so well. The flowers appeared with a half-bottle of Cava and a dish of fresh fruit. Amazingly, the charge when we checked out was 15 euros, less than the undistinguished bunches of flowers we'd seen for sale on Las Ramblas.

Emily arrived, looking lovely as usual, this time wearing the dress we'd bought her over jeans, with her usual clever layering of thin-woven cardigans. We drank the Cava and went out in search of a restaurant. The first one we tried was closed, the next too full of tourists, but third time lucky we thought. And except for the 10-15 min wait for a table dragging out to more than an hour, we were lucky. Michael's smashed eggs (mentioned in account of Day 1), my venison, and Emily's cod were all delicious, as was the Priorat wine. If you have time on your hands, highly recommended: La Bodegueta Provença, on Las Ramblas north of the Carrer de Mallorca intersection.
Posted by magpiemom at 3:56 PM