Fueled by the hotel's continental breakfast, we made our way to Les Halles for some foodie purchases to take back to Laroque. Olive oil went in the bag first and then we retraced yesterday's steps to the Spanish jambon importer we'd seen. He was a delight, handing out wafer-thin samples of his expensive products, explaining where each cut was from, and vacuum packing our selections so that they'd last until our return to London. 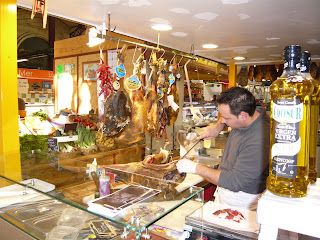 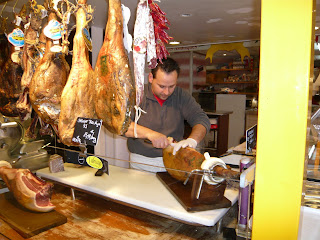 At the bistro L'Estagnol the night before, next door to Les Halles, Michael had started his fixed-price, three-course meal with an order of baked St Marcellin cheese. It was heated up in the small terracotta dishes in which this sort of soft cheese is often sold and was decadently good--as well as being extremely easy to replicate. We asked the waiter where the cheese was from; he wrote "Gandolf" right on our paper tablecloth, a name close enough to Tolkein's wizard Gandalf for us to be able to remember which of the many fromage purveyors to head for in the morning. A great tip. French cheeses are marketed as fermier, artisanal, or industriel; these were clearly not in the last category. Imagine tender little pouches of soft goat cheese with sprigs of herb tucked into a fold in the middle; a flat disk with the Occitan cross left white in a sprinkling of powdered charcoal . . . so many fattening temptations! 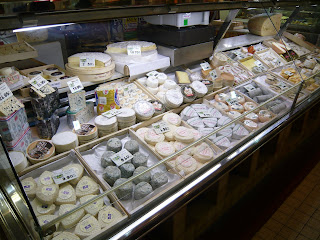 After adding asparagus, blueberries, and what turned out to be superb bread to our haul, we returned to the sunshine and the classic sight of these two French gentlemen chatting outside the market: 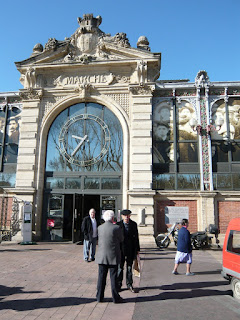 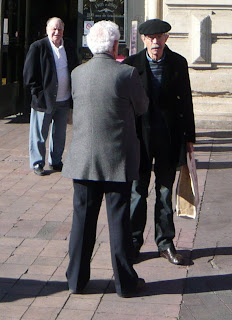 In the square opposite was this emblematic French cockerel. Napoleon had rejected the bird as the national symbol, replacing it with an eagle, but after his fall, the rooster gradually regained its role as sentimental favorite. 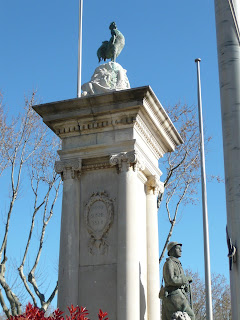 Although we missed the demonstration, a healthy number of the good citizens of Narbonne, as feisty as their emblem, had taken to the streets as part of the national strike the day before--"9000 Narbonnais hier soir dans les rues" according to the local paper. Mid-afternoon we had heard some shouting, but didn't manage to intersect with yet another French "grève." It doesn't require much for French workers to stage a protest. One of my favorite news snippets from a few years ago, after more stringent enforcement of alcohol testing for drivers had been introduced, was about body shop owners parading with placards to demand that the rules be relaxed, because fewer accidents meant less work for them.

To kill time before the archaeological museum opened, we had a coffee at another market bistro and returned to a shop with a covetable handbag in the window that we'd spotted the evening before as we strolled across the bridge over the canal, the "Pont des Marchands." I didn't even want to go back--the price tag wasn't visible and I figured it would be in the 500 euro range, especially since 1-2-3 is a Paris-based chain. However, it was less than a third that price and is in my suitcase as (26 March now, almost a week later) we're packing for the Ryanair flight to Stansted.

It's now 29 March, we're back in London, and I'm determined to get this post finished quickly even though succinctness has never been one of my virtues.

Narbonne's archaeological museum has one of the largest collections of Roman mosaics and frescoes outside Italy. Pressed for time since we had to check out the hotel by 11:30, we rushed through all the Roman rooms and semi-reluctantly skipped the less immediately gripping paleolithic exhibits. The mosaics were extraordinary, design after graceful design picked out in tiny squares of stone; the painted still lifes, often in shades of terracotta and soft green, had a domestic softness one doesn't generally associate with the Romans, given how our history lessons are dominated by tales of military aggression. There were also sarcophagi, pieces of jewelry, glass bottles, coins, dinner plates, pots--all the detritus of ordinary lives that remain when a civilization disappears.

Here's the view looking back at Narbonne --flat, flat, flat--from the mountain which juts out of the river plain between the town and the Mediterranean. Massif de la Clape is the leading wine-producing area in the region, so inevitably our next destination. 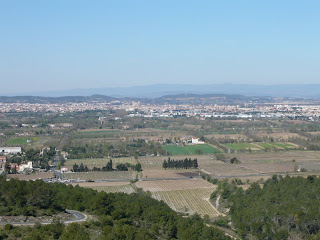 The limestone provides just the sort of difficult conditions that vines seem to thrive in around these parts. You can see below some delicate white flowers managing to find a foothold in the same challenging environment. It's not suprising to discover that in Occitan "clape" means a stony place or a pile of stones. 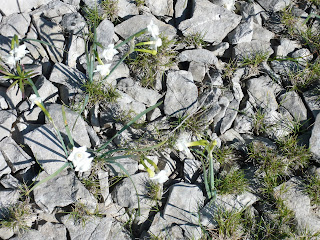 Our first stop is Chateau Pech-Redon, the hottest and driest vignoble in France. Note the similarity of the "soil" to the close-up above. 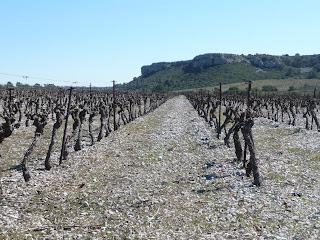 Hard to believe that by May this gnarled vine will be covered in leaves with grape clusters beginning to appear. 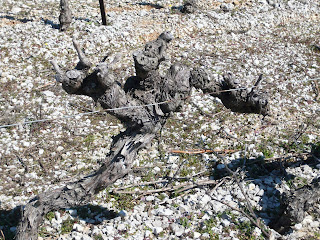 Here is the chateau, not quite what you would find in Bordeaux or Burgundy. Good wine, though, and I felt less guilty about my handbag when Michael spent more here than I did at 1-2-3. 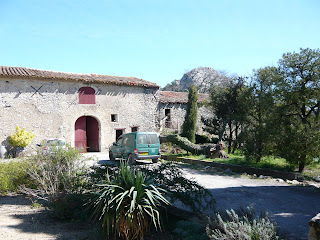 Two views of the vineyard, with Mont Clape rising in the background. 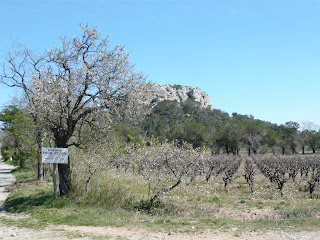 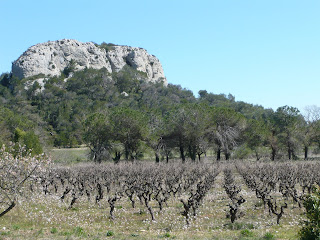 Another shot of the less than verdant terrain. I was reading a 1965 thriller set in France, Gavin Lyall's Midnight Plus One, and on p.98 I came across a perfect description of what we were looking at: "The hilltops turned into bare grey rock, the slopes into rock slides stitched in place by a few bushes or tough grass." I love the use of "stitched." Exactly right. 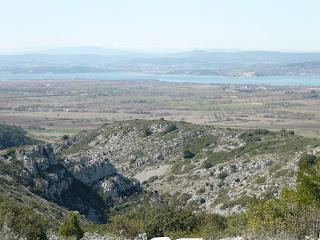 Next we descended to the coast. Michael scooped up some sand for his collection, but neither it nor the beach nor the unending holiday apartment blocks were in any way inspiring. We drove around the old fishing town of Gruissan in ever-diminishing hope of finding a decent place to eat, snagged a parking spot, and then got lucky.

La Fleur de Sel was down a side street. Its decor was quirky--you made your way past a vintage bicycle to be seated--but as soon as we saw the dishes being served to other diners we knew this wasn't your average tired village eatery. The cuisine had an oriental twist, unusual in itself since so many small restaurants here seem reluctant to in any way tweak traditional dishes. We had the best scallops we've ever eaten, large, succulent, and, as you can see below, beautifully browned in some sort of Asian spiced butter. The white puffs were crispy deep-fried rice balls; the purple flower was edible.

As Michael told our charming young waitress, sometimes the best things happen "par hasard" (we had learned on another occasion that "serendipty" isn't one of the many words where you can simply change which syllable is accented and be understood in French). She and her partner, the chef, dream of opening a restaurant California someday. May they get to do it and may they be hugely successful. 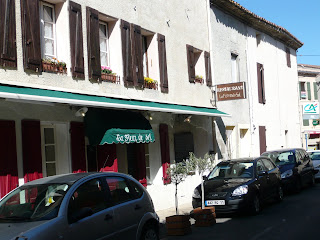 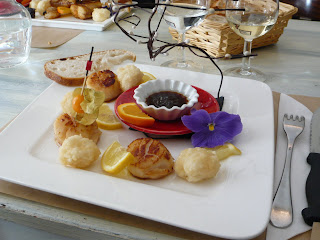 Our last stop was one more winery, Mas du Soleilla, before we started on our way back south to Laroque. Instead of Mont Clape, the backdrop here was the sea. These were the wines we had enjoyed so much at lunch in Narbonne the day before, so Michael stocked up with a couple more cases. We'll be toasting the memory of this overnight trip for a good long time. 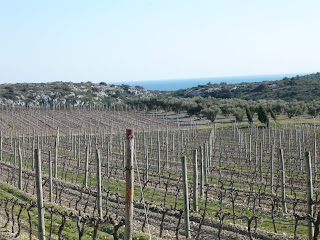 Posted by magpiemom at 7:55 AM