In Laroque now and disciplining myself to make sure I don't keep on indefinitely apologizing to my parents for not finishing up this travelogue. I've done some gardening in the sunshine today, a spot of shopping at Picard and Carrefour, and some flemmarder-ing with Stieg Larsson's The Girl Who Played with Fire (his trilogy is extremely addictive and recommended to anyone looking for an entertaining thriller). It's about time I sat down in front of the computer.

Back to Tuesday in Barcelona.

First stop was the lounge/breakfast room in the hotel, complete with Wi-Fi access and Macbooks. The spread was superb--fresh fruit, cheese, jambon, crusty bread, fresh-squeezed juice. We staggered out well-fortified for a day of sightseeing.

Tuesday's metro travel reinforced our impression from the night before that Spanish public transport is hard to beat. You had commented on this when you were in Bilbao several years ago, Dad, and it hasn't changed. Stations were clean, we never waited more than a couple of minutes, the tube cars were at least a metre wider than those in London (accommodating the narrow guage track that is the curse of the UK capital's aging system), and design features like molded plastic seats, stainless steel handholds, and lighted destination boards were state-of-the-art. We had bought three-day passes for the metro and museums, so we were set to cram as much in as possible.

Deciding that the Gaudi masterpiece that is Barcelona's most famous landmark should be the first ticked off our list, we headed for the incomplete and always-under-construction La Sagrada Familia. Variously described as a melting waxwork, an animal-vegetable-mineral extravaganza, "one of the most hideous buildings in the world" (George Orwell), it has to be seen to be believed. All the pictures we had studied did not prepare us for the complex immensity of the church itself. I'll rely on a few of many, many photos that, of course, don't do justice to the extraordinary reality: 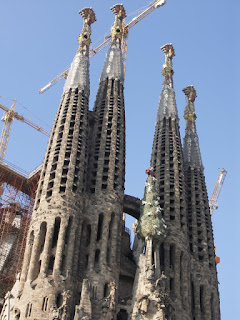 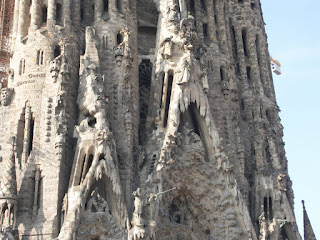 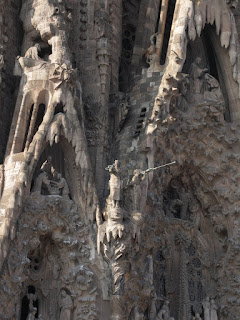 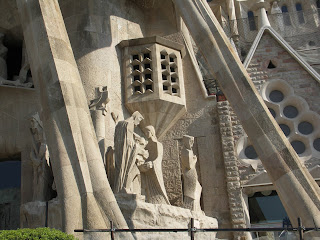 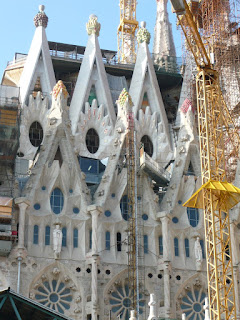 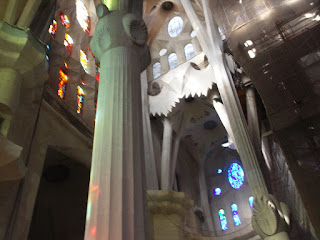 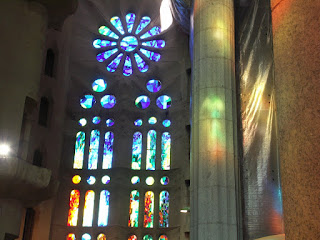 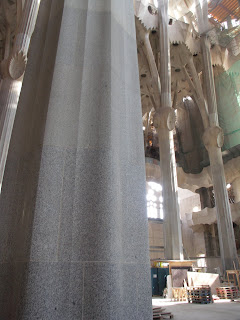 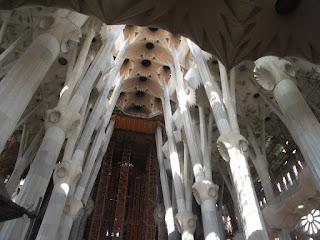 And, of course, construction everywhere. The hope is to have the first service held in the (still unfinished) church in summer 2010, 127 years after it was started. Speculation abounds, though, that La Sagrada Familia won't be completed even by 2026, the centenary of Antoni Gaudi's death. 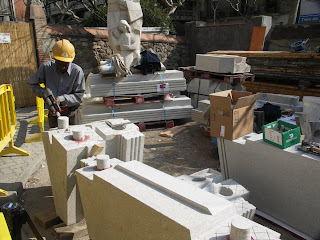 Work is slowed by the fact that anarchists destroyed Gaudi's original plans and models during the 1936-39 Spanish Civil War. Luckily they didn't go as far as Orwell suggested in Homage to Catalonia: "I think the Anarchists showed bad taste in not blowing it up when they had the chance." And now there's a new problem. The superb Barcelona transport system I mentioned above is about to become even better--via a rail link that may well damage the foundations of the church. 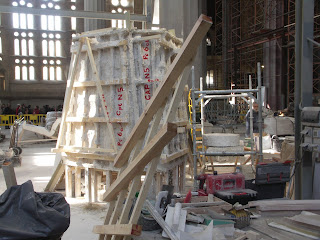 Go to http://www.sagradafamilia.cat/sf-eng/index.php for a superb slideshow.
Posted by magpiemom at 3:09 PM