We're back in London now, but still dreamily reminiscing about this wonderful city. Although the extravagant, glorious mess of Gaudi's Sagrada Familia is the icon everyone first thinks of when Barcelona is mentioned, architectural images aren't the only ones flitting through my brain--especially since the snugness of my jeans reminds me regularly of Catalonia's superb cuisine. Once my efficient husband got used to waiting to be served in restaurants and cafés, we didn't encounter a single cultural or gastronomic disappointment.

The taxi arrived at 4:25 am to whisk us off to Victoria for the Gatwick Express. Trip uneventful except that somehow I managed to lose my gloves before we even left the train. Oh well--nothing new. After forty years, Michael has learned to simply shake his head: certain things never change. I'd be more worried about Alzheimer's if you, Dad (the only one who's probably reading this), hadn't made a list when I was about fourteen of the books, scarves, glasses, etc. that I managed to misplace that school year.

[This is all I managed to finish on 2 March, when I came to a grinding halt as I tried to insert photos. It's now the 7th and thanks to Michael's IT help desk I can proceed.]

The hotel I had found online at a fraction of the regular price would have been worth the full tab. To anglophones the name Hotel Prestige sounds a bit off, but this place was anything but. A few photos: 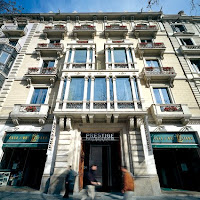 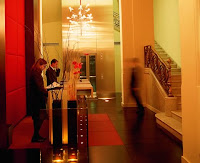 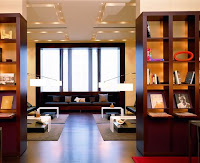 And our minimalist, Zen-inspired room: 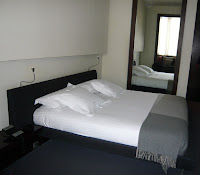 The German contingent soon arrived and, without question, it was Emily, in the elegant sweater her parents had bought for her 30th birthday, who looked as if she belonged in this setting. Unfortunately, although she's both beautiful and thin, she shares her mother's and aunt's aversion to being photographed, so we don't have anywhere near as many photos as we would have liked. Let's just say that everywhere we went, young men flocked to chat her up, including Michael's least favorite waiter. I suspect this would-be actor might have spat in Michael's smashed eggs with Iberico ham if Emily hadn't charmed him.

As Cheri had predicted when I told her the address, the location of our hotel on Paseo de Gracia (Passeig de Gràcia in Catalan) was perfect for rubbernecking. Gaudi's Casa Batlló, where Emily works when she's not at sculpture classes, is just down the street, his Casa Milà is a block north, and La Rambla or Las Ramblas, where we now headed, 10-15 mins south.

Apparently rambla comes from the Arabic for a dry stream, b

ut the original moat/sewer is now a street for tourists, its wavy paving dotted with markets and mimes (unfortunately not caught in these snaps). Looking for a bite to eat, we wandered into the riot of color that is Mercat de la Boquerìa, impressively enlarged from 1217 when it was just a few tables near the old gate to the city. 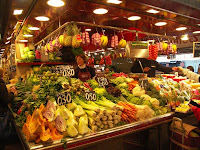 I think I'll leave the five of us here, hungry, with Hans-Jörg and Michael panting for a beer, as we give up on the crowded market and head for the courtyard café between Emily's art academy and the Biblioteca de Catalunya.

More tomorrow, which now means Monday, March 9th. Thanks to my procrastination, I've discovered that Blogger dates posts according to when you first save them in draft form, not when they're published.
Posted by magpiemom at 11:21 AM