Back to Day 1, Barcelona

I have to rein in my verbosity and speed up my photo insertion if I'm ever going to provide my parents with the promised account of this trip before we head off on the next one (France on Thursday).

I had left us hungry and thirsty, heading for Escola Massana (http://www.escolamassana.es/ca/page.asp?id=1), right near the hospital where Gaudi was brought and died after being hit by a tram farther north at the Sagrada Familia . This was Michael's first lesson in the graceful art of waiting to be served. Our grumpy waitress was quite charming by the end, the tapas were surprisingly good for a student hangout, the sun was shining--there are certainly worse ways to spend a couple of hours. Emily kept us all entertained with her imitations of rich Italian (sorry, Anonymous) and Russian customers at the coffee shop where she used to work: with a twist of her shoulders and a tilt of her chin we could see the designer sunglasses and fur coat she wasn't actually wearing. 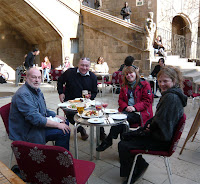 This meal, Katharine, is where the uproarious discussion of your term "fuckwit" took place, as we all listed candidates and behavior to refine our use of the word.

Fortified by beer and sangria, we hit the Old Town. Emily's favorite bookshop was closed for the siesta, but we did find her a birthday dress in one of the endless number of charming, idiosyncratic boutiques that line Barcelona's narrow streets. Such a different shopping experience from the inevitable chain stores of the British high street.

After peering into the Plaza de San Felipe Neri (Plaça Sant Felip Neri in Catalan), its church wall scarred by either mortar shells or bullets from the Civil War, we moved from the depressing to the uplifting when we encountered Profesora Pilar Rodriguez singing outside the Església de Santa Maria del Mar. Emily has a knack for friendship, and this woman, like many others we passed on the street, greeted her with hugs and kisses: 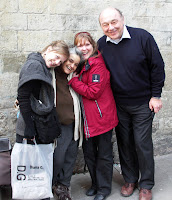 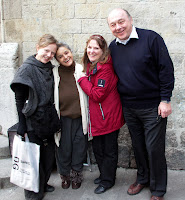 Wandering on, Cheri bought me a meringue and then a fabulous scarf for my 60th (I'd kept her dangling for a year on what I might like). Barcelona is paradise for geologists as well as shoppers, especially for one who has just written a book on sand and sandstone. Go to Michael's posts of March 5th and 8th for a description of this aspect of the city, from Roman walls to fin-de-siécle modernisme. (http://www.throughthesandglass.typepad.com/).

We then wended our way via a vinoteco to Emily's apartment. Her French roommate, who took out the lease, is now making jewelry back in France, so Em has the flat to herself and can let out the other bedroom to guests like Cheri and Hans-Jörg to offset Delphine's expenses. The place has its charms, but mod cons are not among them. In the picture below, the narrow doors on either side of the sewing machine table Emily and a friend carried back from the central market lead to a tiny shower and an even tinier toilet. 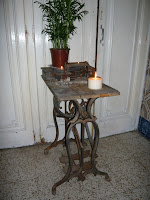 We had been intending to go out for more tapas, but the local restaurant was closed. Instead, we stayed where we were and downed cava and fino, expresso and cappucino, with a unending supply of cheeses, salamis, tomatoes, olives, bread, pastries--a perfect end to a perfect day. I must remember to copy Emily's light sprinkling of paprika and herbs on the manchego. 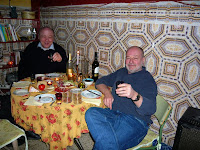 Posted by magpiemom at 6:42 AM