Two billion people are estimated to have watched Friday's ceremony, and from what I observed here at Pacific Place, a fair old number of them may have been in Indonesia.
First, we woke up to find this startling photo on the front page of the Jakarta Globe: 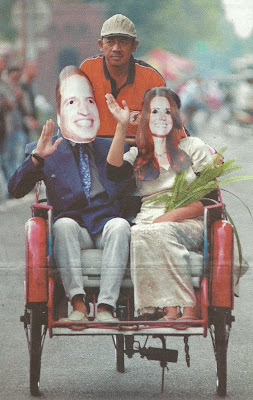 The caption reads: "Royal ride. Indonesian students wear masks of Britain's Prince William and his bride-to-be, Kate Middleton, as they ride on a becak traditional tricycle in Solo, Central Java, on Thursday. The royal couple's wedding takes place in London today."
Under that is a note of further features within: The big day dawns>A9   Eyewitness>C4  Make your own royal wedding cake>C6. I actually am going to make that cake, since it turned out not to be the formal creation guests will be tucking into, but a humble digestive biscuit/condensed milk/melted chocolate affair that is the prince's favorite dessert.
The wedding didn't really impact my day until Michael phoned a little after 4pm. He had been chatting with Sena, his very clever chief geologist, who had asked him why he was in the office and not at Kem Chicks. Apparently there was a major celebration going on, with invited guests treated to a "Royal Afternoon Tea." Michael suggested I get down there pronto, ready to record the event with my camera.
This is the first display I encountered when I entered the store: 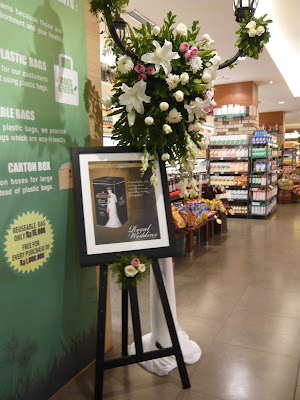 Close-up of picture on easel 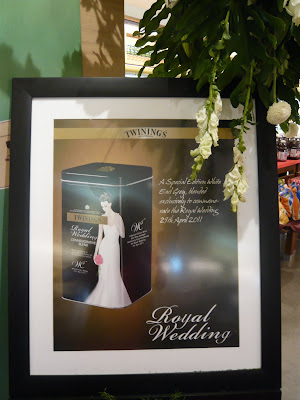 Only 400 of Twinings Royal Wedding Commemorative Blend tea canisters had reached Indonesia and Kem Chicks had a significant proportion of them. 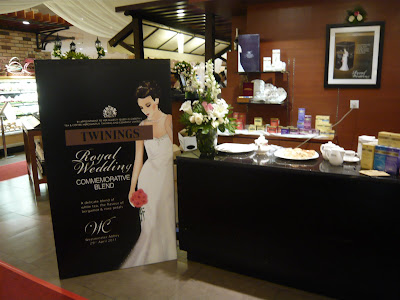 As I was about to change aisles in search of more subjects to photograph, Agus, the incredibly helpful assistant manager who had aided me before in some of my more hapless moments as a new shopper, rushed up to show me a photo he had taken of me snapping away with my camera. He then spotted his boss, introduced me to her, and the next thing I knew I was seated at the single vacant seat remaining at the end of the tea party table.
In addition to Twinings teas, there were raisin scones: 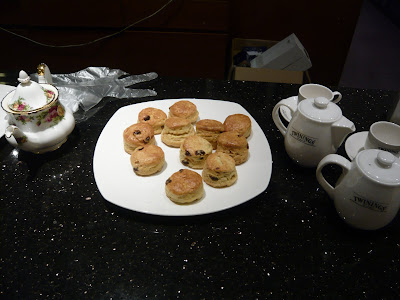 A multi-tiered presentation of sandwiches and croissants: 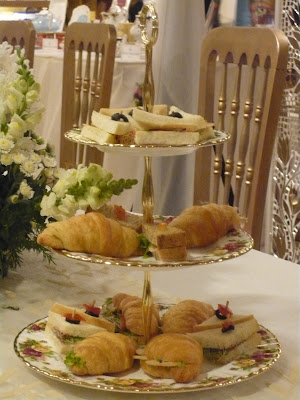 Here is my place setting: 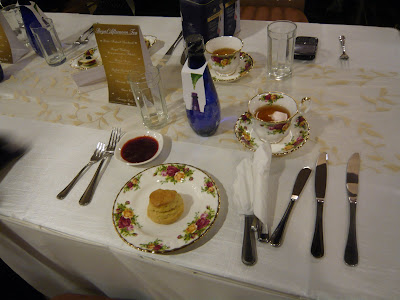 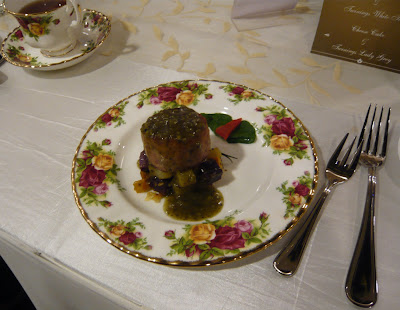 This was followed by a delicious cheesecake that I greedily devoured before remembering that I should have photographed it. Luckily I had been too busy to eat lunch that afternoon, so this unexpected repast was most welcome.
Menu: 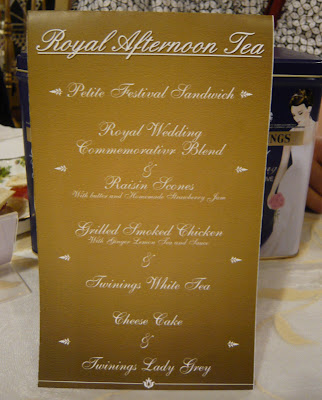 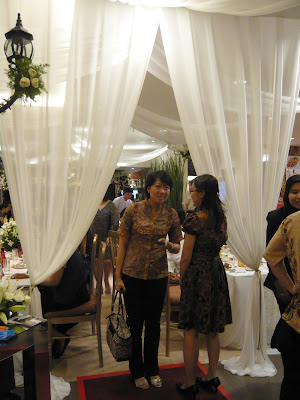 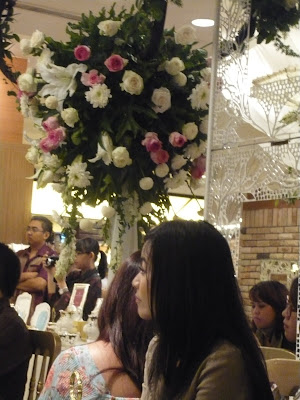 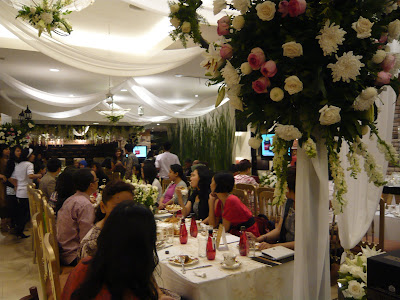 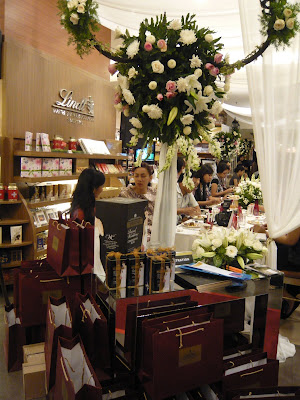 I was seated next to a Canadian woman who has lived in Indonesia since the 1980s, mostly in Balikpapan. Unlike me, she wasn't a last-minute interloper but an officially invited guest. 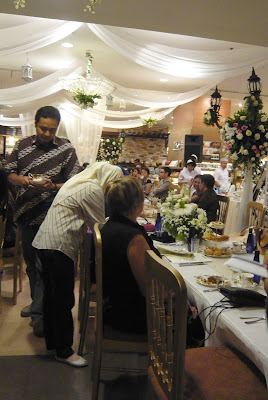 No one ever did sit in the place of honor: 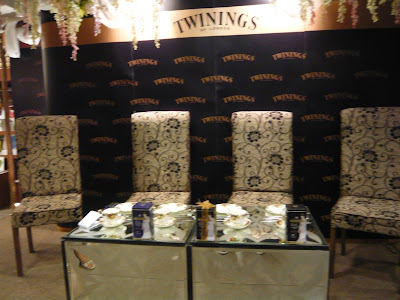 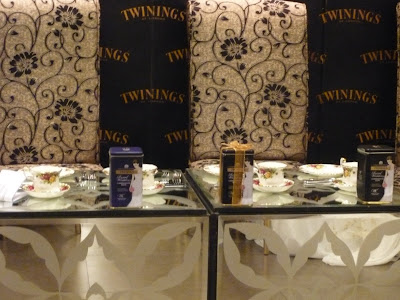 But lots of young girls did have their photos taken with two mimes in Queen's Guard uniforms. 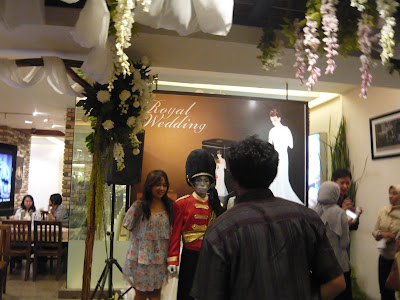 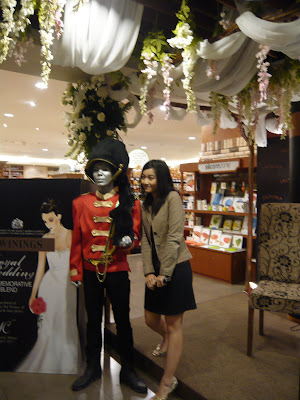 For anyone who missed the TV coverage, below are screen grabs of the Westminster Abbey ceremony, displayed on large screens throughout the dining area — far more memorable than if I had tuned in to CNN in our apartment. 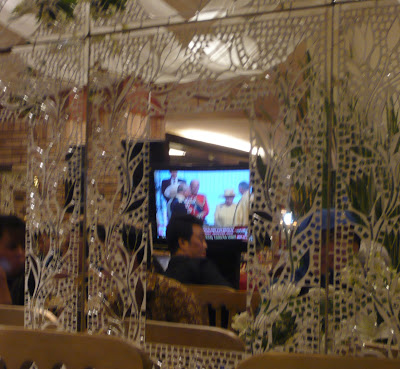 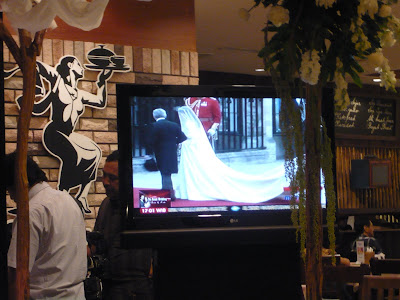 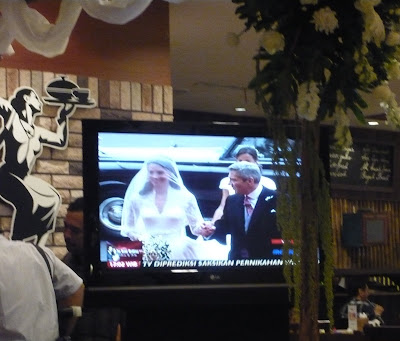 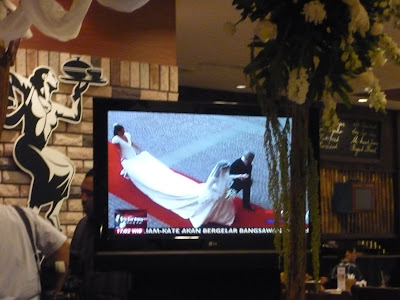 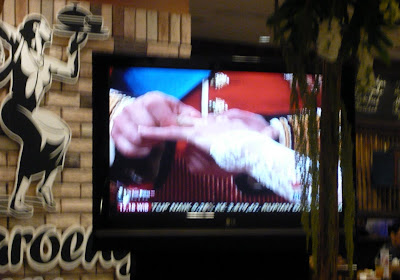 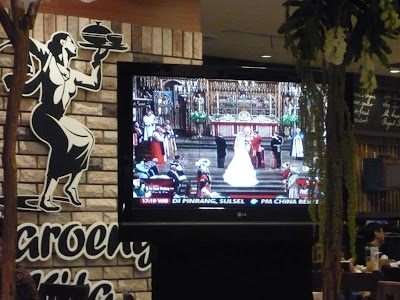 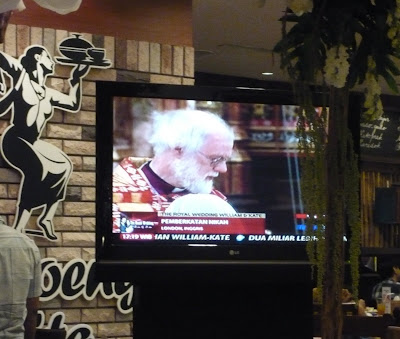 The staff were watching, too: 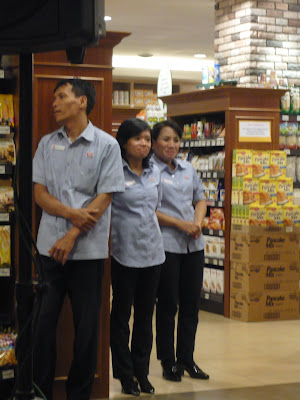 No question about it, an experience to be treasured and remembered, whatever ambivalent feelings I may have about royal weddings. My last indelible images were of those stalwart guards, marching around the store after the diners left the banquet table. I was a bit worried about that paint, remembering Goldfinger, but apparently death by skin suffocation is not in any way a likely end, as proven on the very entertaining and informative American show "Mythbusters." 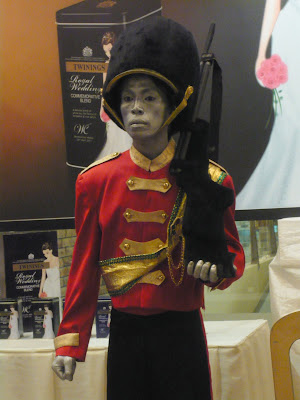 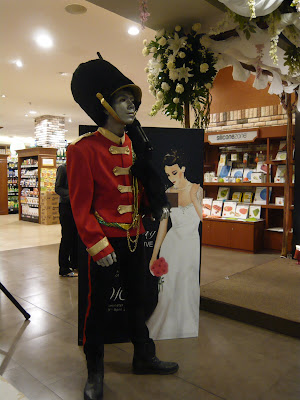 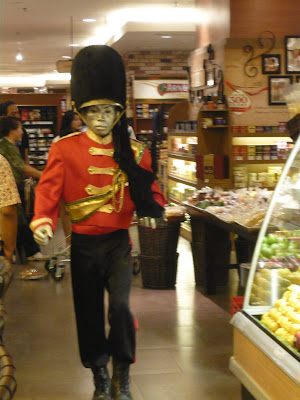