Title of post is Indonesian for "bon voyage." Monica is off today [Thursday, 19 May, when I began writing this] to Austria, where her sister lives with her husband and two bilingual daughters, and then back to her roots in NYC. I'll be suffering from withdrawal during the two months she's away — it has been such a pleasure to trot along beside this companion from seventeen years ago who just happened to roll up in Jakarta again a few months before we did. We were introduced back in the early 1990s by Kathy C, mother of Iain's friend Rachel; the husbands of both these design mavens were working for Unocal. Gregg is a lawyer and since I last saw her, Monica has become one, too. Her last job was as a tipstaff (plural of this new addition to my vocabulary: tipstaves) or law clerk to a judge in Sydney. Since she's hunting for legal work here and has a few leads, the opportunities for our excursions may be limited even when she has returned from the Big Apple to what is now known as the Big Durian.

We first arranged to meet at the American Women's Association Bazaar, the Monday after Michael's and my arrival. I started a post on that loot-collecting opportunity two weeks ago and will finally finish it tomorrow — just in time to report on Monday's upcoming Anza Bazaar.

Monica was ready to leave and unencumbered by bags when she spotted me. As I'll explain later, she's in the process of shedding possessions not acquiring them. We took a taxi (Silver Bird is now the upgrade from Blue Bird, for those of you who have lived here) back to the Ritz-Carlton for me to dump my purchases and then headed into the attached mall for lunch. Such a pleasure to eat in a dim sum restaurant with someone who knows exactly what to order. I've kept our bill so that I can repeat the experience someday with Michael.

A week or so later I was in the elevator at the Shangri-La residences. When the door opened at the sixth floor, I expected to exit into a hallway, but instead I was in the foyer of Monica and Gregg's apartment. And what an apartment it is. She graciously let me snap away like an overexcited tourist, but each time I go there, I realize that I've missed all sorts of fascinating objets d'art, stunningly arranged.

What I primarily remembered about Monica's previous home in Kebayron Baru was the photo collection, framed with large expanses of cream mat in a way I hadn't seen done before. In the intervening couple of decades, living in Singapore, Sydney, and Bangkok, and visiting places like Cambodia and Vietnam, they've amassed museum-quality collectibles that are unlike anything I've seen outside of glossy interior decoration magazines.

Despite being surrounded by treasures and exotica, Monica is still her down-to-earth New York self, witty, liberal, irreverent.

After I had semi-satisfied my nosiness, Purwanto drove us to Grand Indonesia Shopping Town, where Monica introduced me to the Kempi Deli, Gramedia bookshop, and the Ace Home Center I described in a previous post. Here are some shots of the mall/Hotel Indonesia Kempinski  complex and of our lunch at a Japanese restaurant. Donna — I will eventually get photos of the hotel for you. For the moment, I'll embed a link to the website: 5* luxury circa 2011 is a bit different from what you encountered forty years ago. 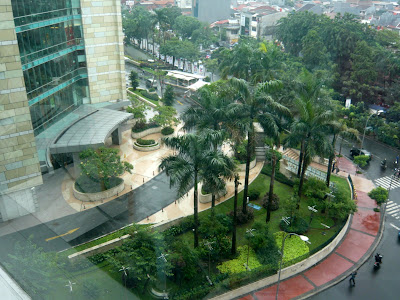 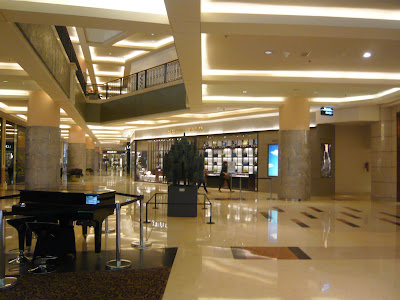 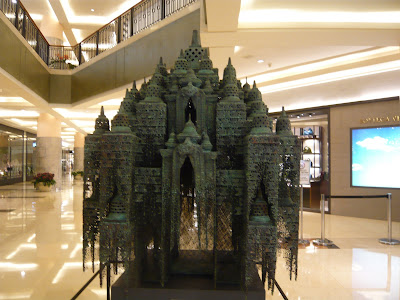 Parang Kencana: The Art of Batik
I splurged on one of these creations in their Kemang gallery when I was shopping with Libby; Michael's only consolation is that hers was even more expensive. 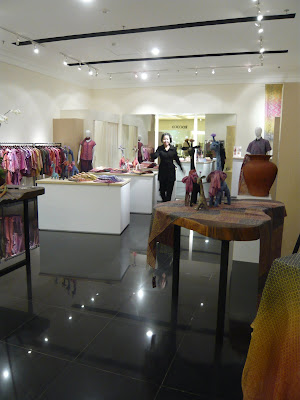 Restaurant floor — not the Japanese restaurant where we ate. 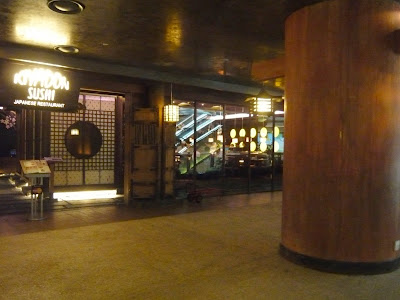 Green apple soda (two,  because I tend to order everything Monica does) 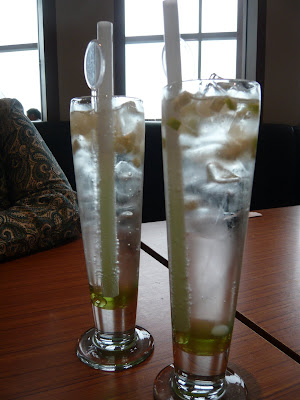 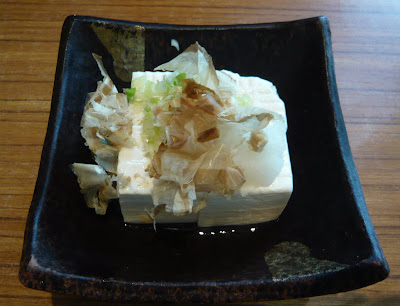 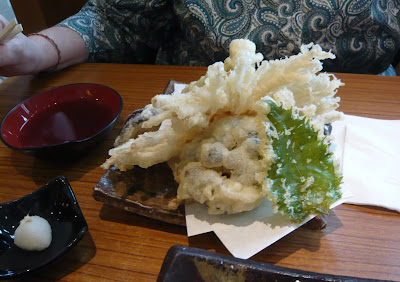 My curry beef with kishimen noodles. I tasted Monica's tempura, but she doesn't eat meat, so she missed this delicious dish. 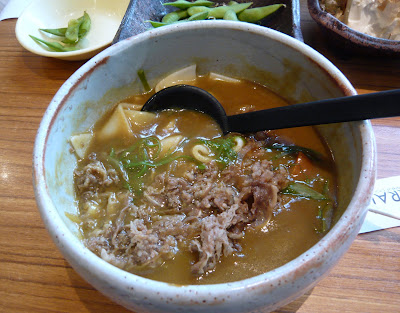 The pancake house opposite Waraku, where we had lunch. 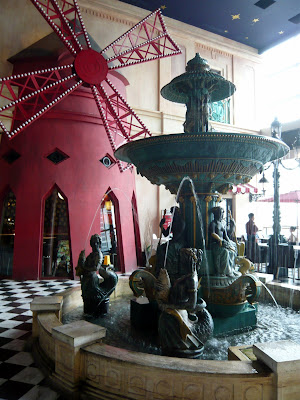 The next time I visited Monica's apartment, I was in shopping mode. Gregg and she will eventually be retiring to an apartment in Bangkok, so she's scaling back on possessions, starting right now. I had arranged to bring Libby over for a cup of tea to see some of the textiles on offer (a fire in their new house in North Carolina had resulted in the destruction of the showpiece hanging in her stairwell). Monica's favorite ikats, songkets, and sarongs will be remaining on her walls, but Libby did buy the first of what turned out in the course of the week to be several additions to her textile collection. I, meanwhile, came back with two bags of small decorations to make our apartment more like home, i.e. more cluttered.


Tibetan cymbals (I hope you like these, Kate, because two of them will be yours); Lebanese door stops filled with sand (Michael approved of all Monica's castoffs, but especially these, which he'll be slitting for samples); Toraja wooden purse; basketry bag and salt container from Kalimantan; other items of unknown provenance. 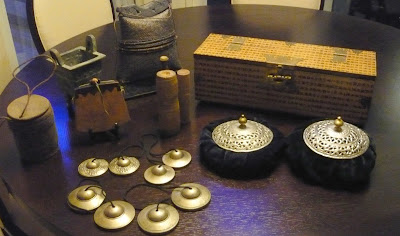 Close-up of box with Chinese characters (key missing). We'll get Patricia, our Singaporean lawyer friend, to attempt a translation. 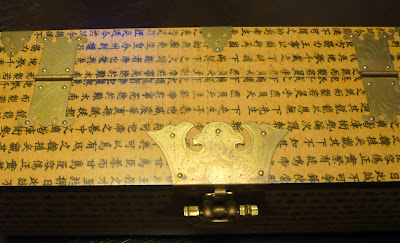 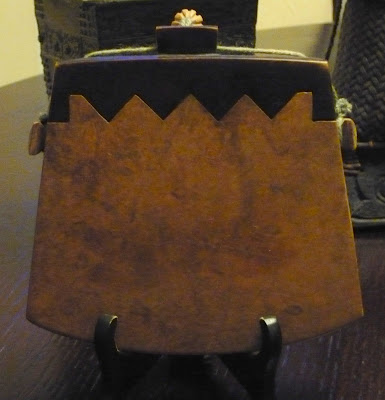 Back in London or Laroque, this will hold a small plant. 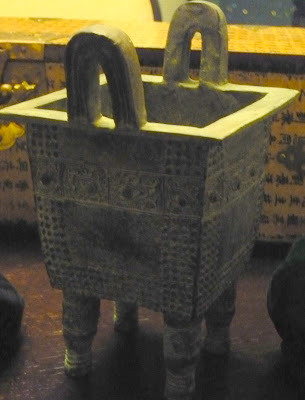 This past Monday, Monica and I had a lazy and delicious Indonesian feast lounging against big cushions at Dapur Babah (the restaurant where I hadn't left my camera). Monica not only knows what to order, she knows what table to ask for. The emphasis was on seafood: shrimp lumpia, fried rice with crab, shrimp sate — and the large table in a secluded nook was big enough to hold it all.

Now she's gone for eight weeks. I'll have to look at the photos I've taken when I'm nostalgic for her guidance and company. Below I'm pasting a few snaps of the Shangri-La and a photo of their balcony to convey some sense of the general ambience. 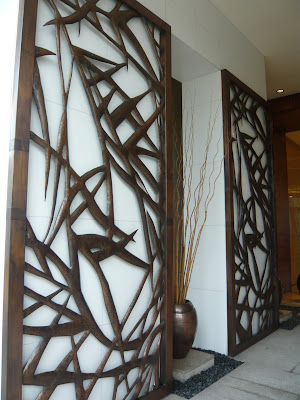 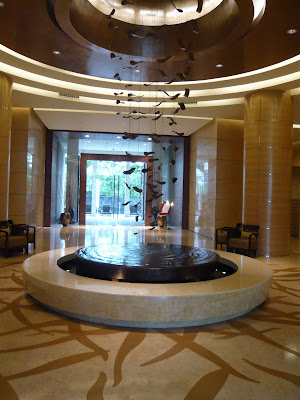 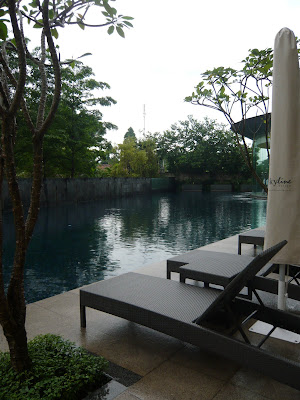 Gym at end of pool 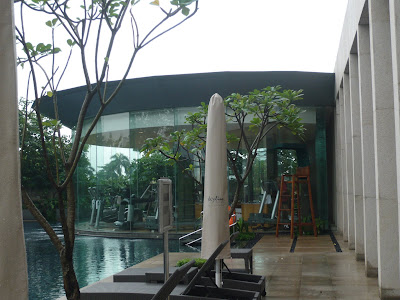 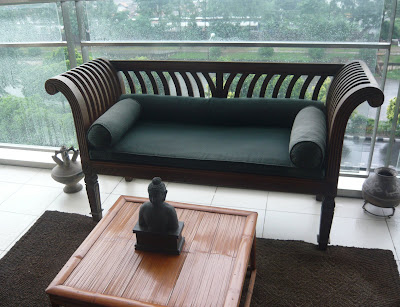 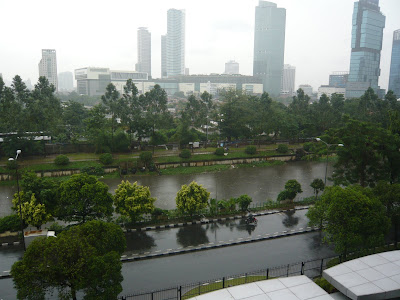 This river is used for ablutions and other more private bodily functions. Unsurprisingly, Monica doesn't sit on the balcony very often. 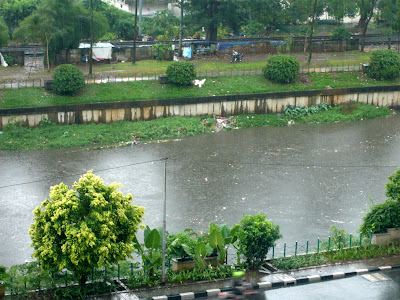