Let's see. Where was I? Palm Springs, if memory serves (quick check here since said memory is faultier by the day). Yes, last photo posted was of the huge wind farm outside the city limits.

Palm Springs does deserve the first part of its name anyway. As expected, there are palm trees lining the broad avenues and presiding over residential gardens. Blue skies, palms, sunshine: all very Californian. There are buildings of more than one story, but not many in the ever-so-slightly shabby old part of town. 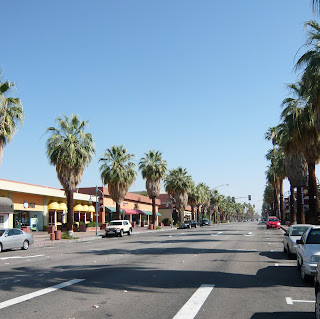 I love the sensible drought-resistant landscaping that shows at least some locals are aware that water--or rather the lack thereof--is an issue here. Sensible can be stunning. 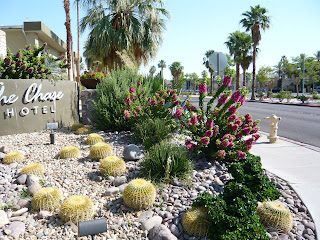 Our hotel, Casa Cody, was a pink stucco restored relic from the 1920s and -30s. Charlie Chaplin used to stay here, and it still has the feel of a short-rent bungalows rather than a hotel or motel. Our rooms consisted of small kitchen, living room, bedroom, and bath. Had the new owners not decorated in warm earth/desert tones, the setting would have been right for David Lynch's Mulholland Drive. The photo below was hung over the toilet--making Michael feel right at home. 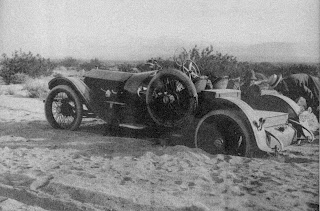 The grounds were lush, an appropriate setting for the surprising collection of Indonesian pieces dotted around. You could have fooled yourself into thinking you were in Bali rather than an LA retirement community. 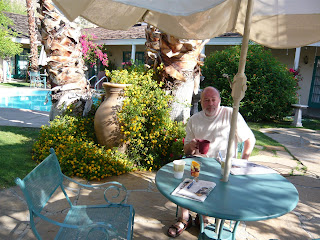 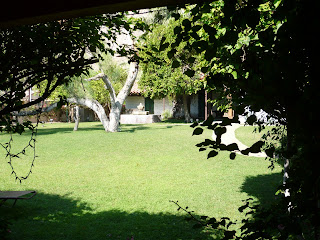 The water used to maintain this lawn, however, was nothing compared to the outdoor air conditioning systems installed by almost every restaurant on the main street, including Starbucks. Those wind farms provide the electricity, but where is the water vapor coming from? I'm far from being a green activist, but this really was too much. The temperature was only in the low eighties. 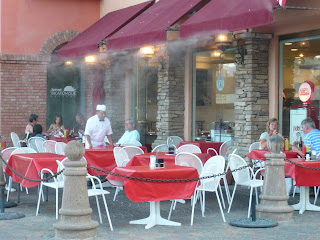 [insert here, 8/14/09, from a Bill Maher new rule on Huffington Post: a golf course in Palm Springs consumes as much water per day as an American family uses in four years]

We had a delicious, you'd-pay-so-much-more-in-London ($76) dinner, washed down with Pinot Noir, at California Pizza Kitchen. This chain (we took Kate to the Plymouth Meeting branch on our way back to Lansdale from Philadelphia airport) was started by two former Beverly Hills federal prosecutors in 1985. If anyone ever finds themselves in the vicinity of a franchise, be sure to try the Cabo crab cakes and, weird though it sounds, pear and gorgonzola pizza (recommended by Casa Cody's manager). We stopped at the Cold Stone Creamery on the way back to the hotel for lemon sorbet in a waffle cone.

Wandering along Palm Canyon Drive, we stepped over stars in abundance: Marilyn Monroe, Marlene Dietrich, Rock Hudson, Catherine Deneuve, Debbie Reynolds, Sonny Bono (he was mayor before he hit a tree skiing, not just a short-timer like the others). Our favorite, though, was spotted by Michael: Borko B. Djordjevic, M.D. - Plastic Surgeon /Humanitarian. Only in Palm Springs. 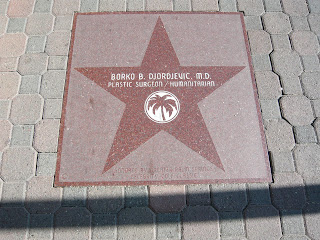 Almost every shop was still open at 9pm. This is a typically inviting window. There is lots of money here and despite its reputation for catering to the 60+ generation (like us), we saw mostly younger people out & about. 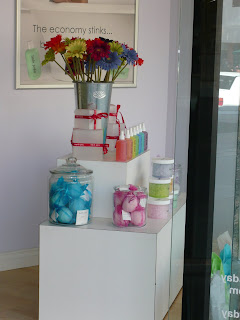 The next day we drove around town before heading for Long Beach, where Michael was scheduled to give a talk at the aquarium that evening. Like good tourists, we gawped at the house where Ava Gardner and Frank Sinatra lived and--to quote the guidebook--fought, and then tracked down Liberace's former home to photograph for Mom. They were both surprisingly modest bungalows. 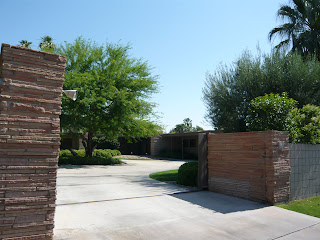 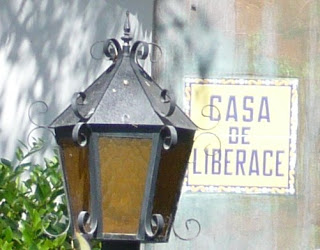 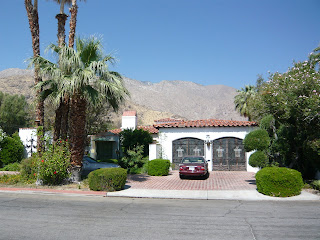 One last glimpse of palms and a colorful metal sculpture that seemed to embody the spirit of Palm Springs--funky and fun. 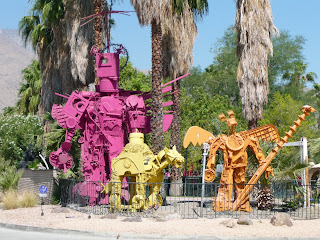 On Hwy60W, we were impressed by the electronic signs that showed both the speed limit and exactly how fast you were going. Hadn't seen those before. We stopped to collect a sandstone sample before the Gilman Springs Rd exit in Marino Valley and then drove through urban sprawl until Long Beach. The extraordinary purple jacaranda in blossom just about made up for the maniac driver who pulled sharply across three lanes of traffic to exit.

Like Dorothy and Toto, we definitely weren't in Kansas anymore. Florist shops were emblazoned with signs reading ORDER YOUR GRAD LEIS EARLY. Poor Kate--you missed out in rural Dorset. We saw our first Segway. And the Westin Hotel itself, room generously provided by the Aquarium of the Pacific, was très elegant: 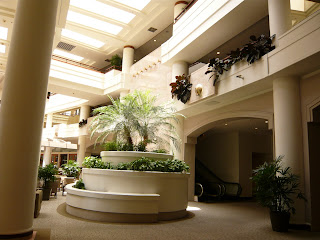 We linked up for lunch with John Grace, an old friend—in the sense of duration of friendship, given that he's eight years younger than Michael—from Arco days. He and John and Peter Dolan (an entrepreneur based in London) once considered setting up a company together, Troika. Never happened, but John, an economic geologist, did pursue the Russia connection. Appropriately enough, that's a disguised oil platform at the back right of the picture. 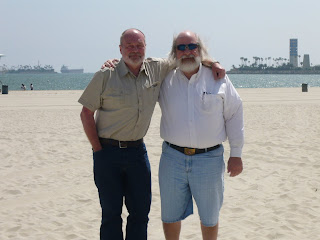 At a seaside restaurant, John and I feasted on pastry-topped Tuscan tomato soup, silky and sumptuous. Michael opted for a good old American hamburger. Needless to say, we came away from the beach with a bagful of sand.

When we returned to the hotel, we had a message from one of our favorite LA Arco friends, Lorraine Vega. She had bought her ticket to the talk, but was suffering from a headache and cough that ended up laying her low for a month with bacterial bronchitis (sound familiar, Myrna?). We haven't seen each other for over twenty years and our meeting would have been one of the highlights of the trip. Here's to a rendezvous on our next California visit!

Linda Brown, the PR rep from the aquarium, kindly picked up us and Michael's props outside the hotel. Finding out that she was 62 was a big shock—there must be something in California water that keeps you looking youthful even without surgery. We then met Jerry Schubel, the CEO, and his wife Margaret, both, like Linda, the epitome of graciousness. While Jerry interviewed Michael to provide a video for the archives, Linda took me around the aquarium. I've spent quite a bit of time today reading about Kentucky's Creation Museum on the Pharyngula website--so different from this experience where the only agenda was to inform and entertain. If we're ever back in Long Beach, we'll reserve a couple of hours for a proper visit. Michael needs to get to pet a shark, too.

The auditorium wasn't full, but the audience was enthusiastic and the talk went really well. There were no hitches with the powerpoint presentation, always a slight worry, and, thank heavens, all the experiments worked. Carting around the materials for these was definitely worth the effort. Below are a couple of snaps from the book signing afterwards. You'll recognize John Grace standing behind Michael in the first photo; in front of the table is Margaret Schubel. 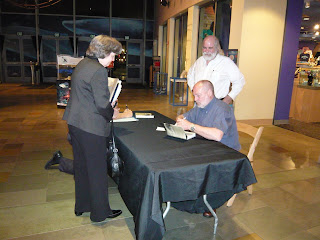 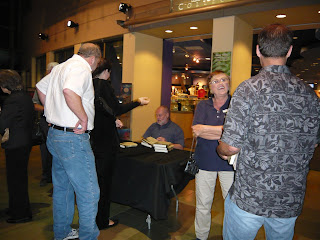 Back at the hotel, we retired to the bar to celebrate, where Michael had a "dirty" martini (with olive juice) and I had a mojita, remembering how much I enjoyed this drink when Kate made a pitcherful for my 60th birthday. Now there's actually something I can order besides a frozen margarita.

The breakfast buffet the next morning was delicious, with—surprisingly, considering the state's citrus production—the first fresh-squeezed orange juice we'd had in California. I took this photo of the flower arrangement on the table to remind me of how much you can do with very little. 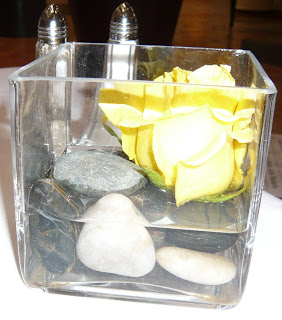 After paying $65 for breakfast, a phonecall, and parking (we'd handed over quite a bit of cash for our two drinks the night before) we managed to get Sal, the disembodied voice of our GPS, to wake up and guide us to Highway 101 and Malibu.
Posted by magpiemom at 8:44 AM