Today was supposed to be devoted to two tasks: getting back to our California trip on this blog (if Kate ends up there, we might need some of those details for future reference) and sorting out broken bits of jewelry that Michael has noticed I haven't worn for a long time. A trip to a repair shop is way overdue.

But . . . the sun was shining and the tide was low, so we decided to head for the Thames and our second mudlarking adventure, scavenging in the river sand for items of no value that nonetheless appeal to us. The stretch of shoreline below was our destination, just over the Millennium Bridge, no longer wobbly; you can see Tower Bridge in the distance. The second photo is a close-up of a non-sandy portion of the "beach," clearer if you click to enlarge it--we haven't started collecting those oyster shells yet, you'll be glad to know. They were once fast food for the poor. Michael won't let me pick up any bones either--though he'd relax this prohibition if I could find one that had been made into a needle or die or knife handle. 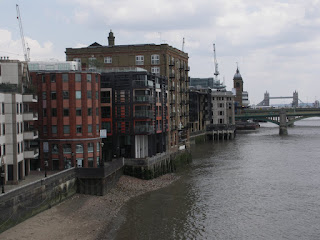 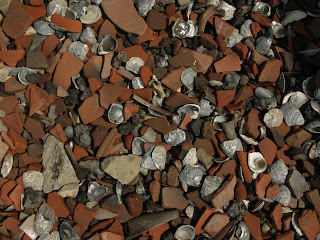 A photo of today's haul, including broken bits of glass, china, and the clay pipes smoked by ferry passengers. The china and pipe stems would mostly be from the 18th and 19th centuries. 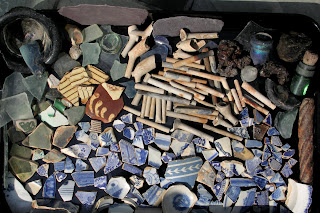 It occurred to me that we could make a mudlark mosaic of some sort running as a band across the blank wall on our upstairs patio. Think Gaudi and his Barcelona recycling. Michael's more artistic than I am, so the onus of a job like that would fall on him. We shall see.

Neither of us knows how to work in metal, otherwise jewelry or serving plates would be a possibility. The products of several pottery classes I took at Yeovil College when we lived in Dorset ended up--deservedly--in the rubbish, so clunky clay creations are, thank god, not about to litter the flat. Go to these links to see what someone who is clever can do with bits and pieces like this or with the sand Michael collected:

Michael found these links while preparing his much more detailed throughthesandglass post on the same subject. In a nice bit of serendipity, he also came across this species of magpie we had never heard of. Perfect!


The Magpie-lark (Grallina cyanoleuca) is a conspicuous bird of small to medium size, usually known as the Mudlark in Victoria and South Australia and the Peewee in New South Wales and Queensland. It is common and very widespread, occupying the entire continent except for Tasmania and some of the inland desert in the far north-west of Western Australia.

A primarily carnivorous species that eats all sorts of small creatures, the Magpie-lark can adapt to an enormous range of different habitats, requiring only some soft, bare ground for foraging, a supply of mud for making a nest, and a tree to make it in. 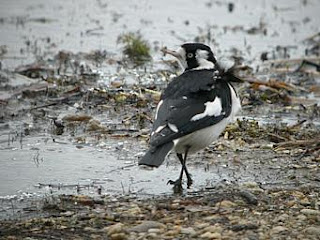 Posted by magpiemom at 5:31 PM