Yesterday Michael and I trotted off to a tea-and-cakes charity afternoon. Our friends Nora and Geoff had joined with other serious but for the most part non-professional cooks to produce a mouthwatering display of goodies. 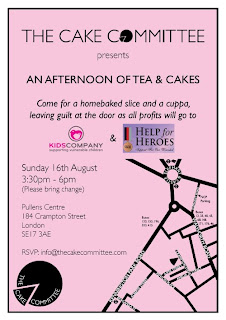 The event was held in Pullens Yards, an enclave off the Walworth Road in our part of SE London that we never knew existed. The buildings were originally live/work spaces for artisans and small shopkeepers, built in the 1870s. This vision was re-energized a century later when designers began to move back in.

Below are two photos from the Pullens website, which has more on the history of the enterprise at http://www.pullensyards.co.uk/history.php. Such a contrast to the Elephant & Castle shopping center, which we passed on our way there!!

The tea treats were wonderful and warranted mention in Chowhound: For Those Who Live to Eat. Nora made the blueberry cake described—but we never sampled that, having gorged on her lemon poppyseed and death-by-chocolate cakes.

A "underground"* place for cakes and tea at Pullens Centre (184 Crampton Street).

A gorgeous spread of cakes. All homemade by people who don't bake for a living. Beautiful stuff with good craftmanship, easily rivaling or surpassing some of the professional stuff I've had at bakeries. Will just mention the highlights:

A blueberry cake with immense clarity in the in blueberry flavour in the frosting, sweet and vivacious, the cake itself wonderfully moist.

A wonderful depth of flavour in a Bramley apple cake, rich almost caramel-like frosting, sweet (cinnamony?) apple, all the flavours coming together with a beautiful natural ease.

A strawberry cream cake of some sort strikingly decorated with candied rose petals.

Simple teabag tea was free, good enough to wash down the sweetness.

* - Not sure if "underground" is the right adjective -- it's not a formal restaurant or anything, essentially several organisers bring cakes that they made. They charge £2 per slice or £5 for a sample plate of 6 of your choice, out of more than a dozen types of cakes. It's not like some hush hush illegal secret thing -- they maintain a blog at: http://thecakecommittee.blogspot.com

IIRC, the next event is going to be on 18 Oct (Sunday), according to one of the little printouts that also served as a bill. I think they plan to hold one every 2 months. Profits for this one goes to Kids Company and Help for Heroes. I don't know if they'll keep the same format since this was their first run but it would not surprise me if they were to tweak things a little.

I had stupidly not popped my camera into my handbag, but here are three photos c/o Lu Zhou. The beautiful crystallized rose petals shown in the first remind me of how unbeautiful the ones I tried to make in France were. It would obviously be worth trying to find a better set of instructions. 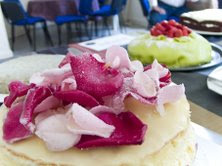 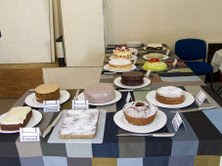 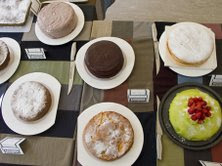 One of the baking crew was Jake Tilson, who wears many hats besides the invisible toque of a passionate cook. We have a box of his rock cakes with wakame dried seaweed waiting in the kitchen, and I've now ordered two copies of the American edition of his book, A Tale of 12 Kitchens. It received this review from Henrietta Greene, of Food Lovers' Britain:

Jake Tilson's A Tale of 12 Kitchens is a personal memoir that traces his experiences of food as the binding element of family life. As Jake is the author, cook, designer and photographer - not the usual state of affairs I assure you - this is a particularly intimate account that explores his gastronomic roots and influences.

The book reads like a diary-cum-holiday scrapbook, it is accentuated with family photos, hand-written recipes, and images of products and places that may evoke similar jolts of memory in the reader. His travels through, and life in, four different countries - England, Scotland, Italy and America - inspire his collection of recipes, be it Blizzard Duck in Scotland or Thanksgiving Water Tower Stack from New York.

The recipes originate from a variety of sources - his parents' early attempts at self-sufficiency in Wiltshire, family friends in Tuscany, his Scottish parents-in-law and his own time spent in New York and California. They feel like familiar and much-cherished friends and relations with the photos adding texture and context. Jake's descriptions of gargantuan breakfasts in New York, or assembling burritos in hotel bathrooms in LA are vivid enough to make you long to buy a camper van and head for the hills.

Runner up for Food Book in the 2007 Glenfiddich Food & Drink Awards, Jake also tackles such thought-provoking questions such as `Why do we cook what we cook? What has the deepest effect on our culinary habits - is it childhood, marriage, the neighbourhood or what we saw on television last night?'

I defy anyone not to fall a tiny bit in love with Jake. How can you resist anyone who issues instructions on how to build a tortilla press, should you find yourself without one in the California desert?

Geoff and Nora also introduced us to Peter Ting, who spearheaded The Cake Committee. This morning a message appeared in my inbox from Nora with a pdf of an article from the September 2009 issue of Food and Wine. I don't know how to insert that in my blog, but I can put in a link to an abbreviated version on the internet. This friendly, helpful man is another talent to reckon with:
http://www.foodandwine.com/articles/an-irish-country-dinner-with-ceramicist-peter-ting

Our delightful Sunday afternoon was a great example of the validity of a statement (paraphrased—exact words lost somewhere in mists of time) our friend Judy Smith made decades ago: "What I like about living in cities is that you may not be doing anything, but you're sure to meet people who are." Certainly true for me.
Posted by magpiemom at 12:29 PM