Looking at the Picasa thumbnails of our California photos, I can see that this trip, like our Barcelona visit, will spread into more than one post. Damn. It's sunny here in France and my will is weak, so heaven knows when even part (i) will make its way to cyberspace. I'm starting this on Saturday morning, 11 July--and will break here for breakfast.

. . . for breakfast, gardening, karchering, window cleaning, and lunch, as it turns out. I'm not going to last long now either, since sunshine and sloth mean a novel on the chaise longue will win out over laboriously scanning photos in from Picasa. Our France Telecom connection, never superfast, is particularly slow today.

Okay. Our only way to get a cheap fare from Detroit to LA was via Phoenix. Nice airport, jampacked, which provided our first sight of anti-swine flu face masks. These were worn by a couple of young Chinese backpackers, however, so panicky UK coverage of southwest US fears of an epidemic spreading from Mexico would seem to fall into the usual "be afraid, be very afraid" category of reporting. In the entire week we were there, we only spotted three more (useless) masks, when departing LAX.

Since water, or rather a lack thereof, was a feature of this sand-driven excursion, I'll include a photo Michael took out of the plane window as we took off. There are a dubious number of green patches in this Phoenix mosaic and there were even more in the overall bird's eye view: a taster of our later stop in Palm Springs. With water and energy at a premium, you do have to wonder whether these places, like New Orleans for other reasons, should really exist. Ah, well. I got Michael to install air conditioning in France, so I can't be self-righteous. 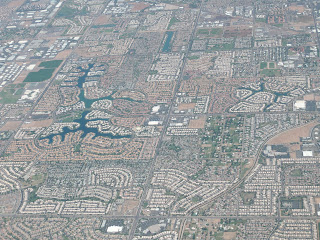 After picking up some Mrs. See's toffee and peanut brittle at LAX, we caught a bus to the Alamo rental office--a long drive that gave us a sense of how huge this airport is. Plans for a convertible evaporated when even our small bags wouldn't fit in the trunk. Instead Michael opted for a red Mustang, the perfect vehicle for this 40th anniversary jaunt. So that we remained married by the end, we also splurged on a Garmin GPS system. Our schoolmarmish guide became SAL, our female equivalent for 2001's HAL [I once read that Arthur C. Clarke claimed not to have been aware that the letters of this acronym were each, alphabetically, one before I-B-M]. She was a godsend, though I did occasionally pull her plug when Michael got tired of hearing "Recalculating" whenever he decided to override her instructions. 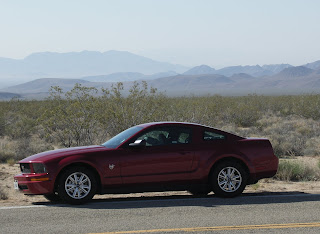 SAL guided us to the freeway and that's where our trip almost ended. The driver ahead of us slammed on his brakes--for no reason we could tell--and we just missed plowing into him. We weren't even passing the billboard advertising "Breast Augmentation $2999" that appeared later on 605N.

Our first meal in California (other than the Mrs. See's candies I'd been sneaking) was lunch in Victorville, at a chain restaurant called Mimi's Café. So much better than somewhere like Applebee's. Michael's Reuben and my grilled shrimp salad with asparagus, pesto and balsamic vinegar came to $25.19 including two ice teas. With that sort of bill, tipping 20% or more is easy, even for Europeans used to 12.5%. 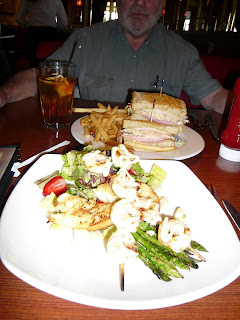 We spent our first night in Barstow, gateway to the Mojave and home to a huge outlet mall. The shopping experience was a concession to me, but it turned out to be boring. Far more interesting, surprisingly, were the millions and millions of dollars' worth of extraordinary trucks gathered at this crossroads town. We were continually amazed as we sped along California's roads (which are a clear sign of the state's budget deficits) by how new and beautifully maintained these massive juggernauts are. We figured the drivers must be polishing paintwork and chrome every day. Turns out this is true, as we learned from the son of the owner of the Apple Lane Inn in Soquel. His dad moonlights as a trucker and keeps his semi spic and span to have an edge on the competition.

Hampton Inn was wonderful value--almost Westin quality for a fraction of the price. They didn't have a restaurant, and Barstow seemed only to offer the likes of Carl's Jr and Burger King, so we bought takeaway Mexican at a liquor store and ate in our room.

Having fueled up the night before--and discovered that you have to enter a zip code to pay at the pump, i.e. US cards only--we headed off early for the Mojave. Bliss for the arenophile in the Mustang! We were headed for the famous singing dunes of Kelso. 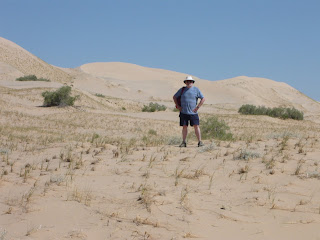 And, yes, Michael did get them to "sing" by running down the first likely slope after we'd trudged in for about an hour. Even I managed to set the sand grains to vibrating properly. Sounded like a tuba, very appropriate given that this was Michael's instrument of choice during his teens. Go to his blog for a more accurate and entertaining account of the dune experience. In the photo below he's preserving some of these treasured grains for posterity. 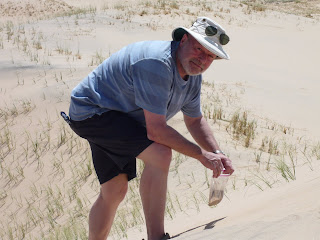 Mission triumphantly accomplished, we heard the grains resonate again via a recording at the gem of a museum in Kelso itself, also discussed in throughthesandglass. I'll duplicate Michael's photos of the restored depot and the old-fashioned counter, The Beanery, where we had lunch ($8 each, delicious sandwich and drink--love these US prices). Everything was organic. Even what appeared to be plastic cups were made of eco-friendly Greenware: "This environmentally sustainable cup is made entirely from plants." There's a wonderful bookshop inside, too, where Sand may soon be available. . . . 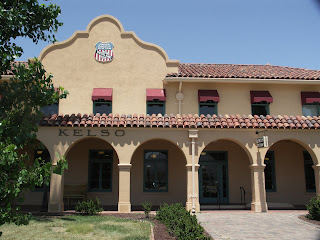 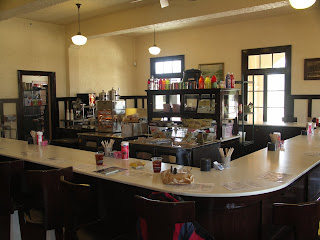 The national park ranger on duty, once he had finished listening to a long rant by a young-earth creationist, identified the plant we had spotted occasionally along the highway as jimson weed, or datura, a toxic natural hallucinogen. It's quite a surprise to suddenly see these lush leaves and blossoms where nothing else is growing. 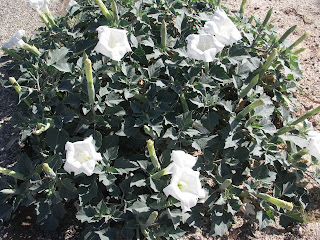 The Kelso Depot Museum has also preserved the old post office and the "infamous two-cell metal jail," a short-term holding facility that reminded us of the movie 3:10 to Yuma. 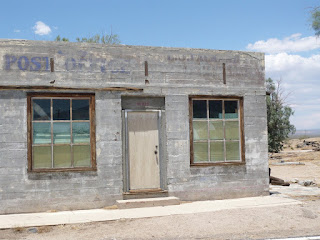 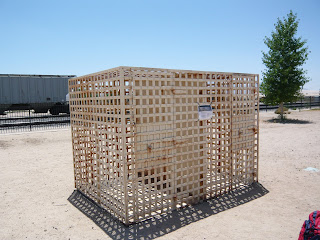 Back on the road again, driving through country reminiscent not only of westerns but of Flannery O'Connor's short story "A Good Man Is Hard to Find" (the isolation not the scenery--if you're not squeamish, click on this link). 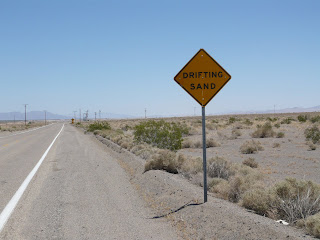 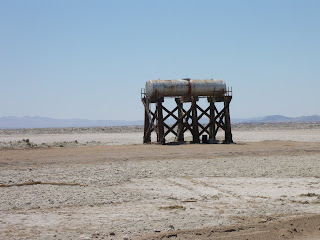 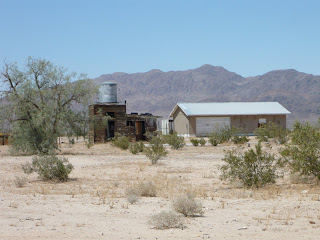 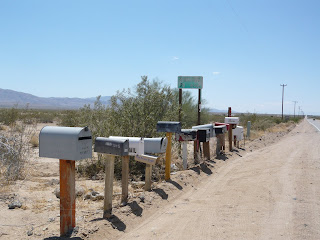 From the road we couldn't see any houses associated with the line of mailboxes above. In Amboy, however, on Route 66, civilization appeared in the form of a classic fifties motel and, across the street, a post office marked by a statue that provided the perfect setting for Michael and his Mustang. 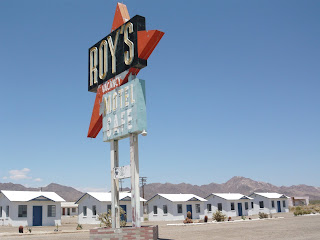 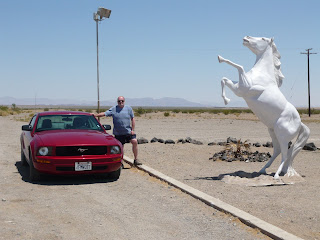 This desert wasteland had its own beauty, of course, especially evocative when you could hear the melancholy hooting of a train in the distance. Much to interest a geologist here besides sightings of the San Andreas fault: black lava flows over the sands of a lakebed, the salt flats where the National Chloride Company of America had its evaporating ponds. Some of the chlorine you throw in your pool may come from here, Dad. 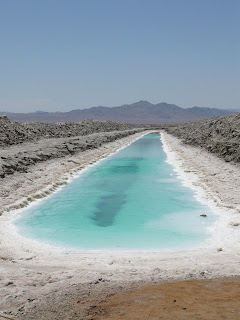 As we headed south, more and more houses began to appear--though the big "Live and Let Live" sign we saw still captured the feel of the landscape. We passed through 29 Palms, the world's largest marine base, where Barber Judi offered "Marine and Civilian Haircuts." [Michael and Claudia's son Shane trained here before being posted to Iraq; he'll be back again for Afghanistan simulation in the surrounding desert.] The meeting house of True Vine Fellowship Ministries was beige and brown corrugated tin--so different from the stone chapels of suburban Philadelphia. The faded pink wooden building that housed the Hi-Desert Cultural Center had been abandoned. And, amidst the gunshops, we were very taken by the street called Kickapoo Trail.

Though we were running out of time and couldn't make a detour to Joshua Tree National Park, we did get to see these ancient trees (named by Mormon settlers who thought they pointed the way to the Promised Land) along the highway. 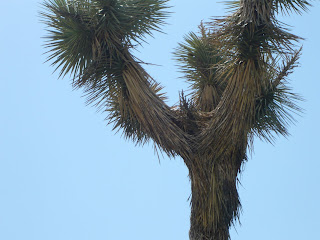 A bit farther south we passed a sign reading HIGH WINDS AHEAD and at the next turn found ourselves staring at acres of what the French call éoliennes. We've seen them scattered across the countryside in the UK and France, but never a collection of turbines like this. It was a wind ranch, not a wind farm. And when we got to Palm Springs, our stop for the night, we found out how far too many of those kilowatts of energy generated are being squandered. 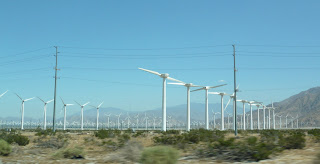 Posted by magpiemom at 7:37 AM