We ate most of our meals in the nJoglo Resto, an open air pavilion on the grounds of our hotel. Dusun Jogja Village Inn bills itself as "Relaxed * Distinctive * Unique" and the restaurant was certainly a pleasant place to pass the time, as shown in my post about Day 1 of our trip.

The "unique" part arrived in the person of our friendly and talkative waiter, Dhohri. They say everyone has a story; he certainly did. Born in Madura, his father died when he was five and his older brother seven. The ages of his three sisters didn't matter for inheritance: unfortunately for all the children and their mother, the fact that there wasn't a male heir over the age of seventeen meant the property had to be divided in half, with 50% going to his father's brothers. These relatives promptly descended on the house and, despite the pleas of Dhohri's mother, carried off their share, right down to half the plates and glasses. This tradition is Maduran, not Muslim, one of the reasons Dhohri said the island is "not good for women."

For someone who had been married off at thirteen into a life of childbearing and domesticity, what Dhohri's mother did next is quite amazing. She packed up her children and moved to Yogyakarta. A princess in the royal family had a palace in Madura, so Yogya's reputation for spirituality and serenity had percolated through to this mother with five kids to look after. She worked, eventually remarried, and never reclaimed the fish farm, land, and family home she left behind.

After the story, the food. The local dish I was most eager to try was gudeg, made from jackfruit simmered in coconut milk. I wasn't disappointed when I ordered this at nJoglo. My food notes are lost for our meals there, however, so pictures of the dishes we most enjoyed, sans name and description, will have to do the job. 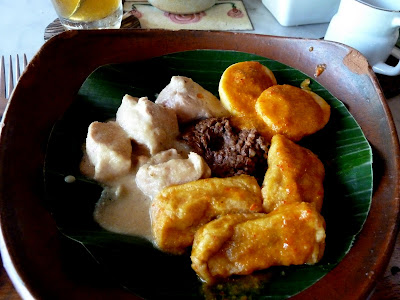 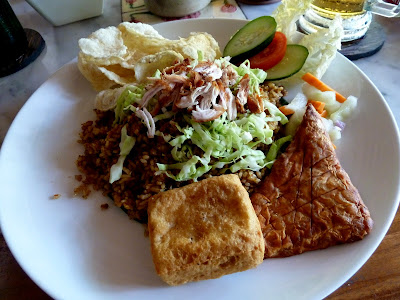 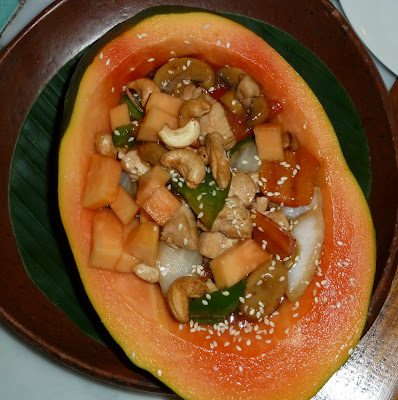 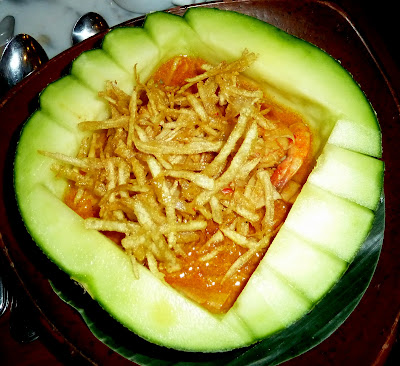 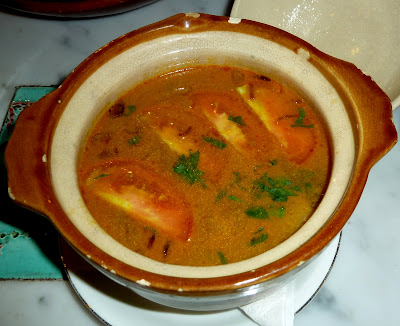 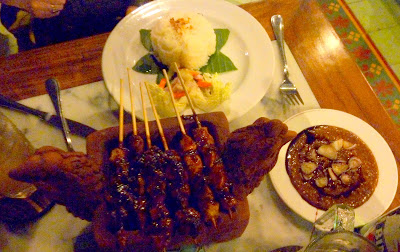 Next came our meal at Soga, the restaurant in the Danar Hadi batik complex. I had the Ayam Bakar Madoc, described as "charcoal-prepared chicken with a special mixture of honey and traditional herbs, served with tasty rice, chili paste and urap." Urap is my favorite Indonesian vegetable dish. 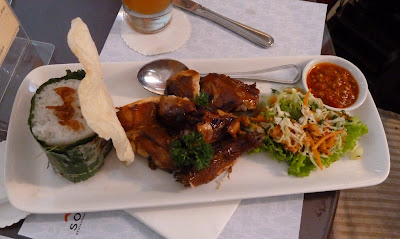 Michael ordered Nasi Soerakarta (=Surakarta, the old name for Solo) Hadiningrat (the larger Solo kraton that we didn't visit). This is "a combination of traditional Solonese dishes such as lodeh, godon, brongkos and garang asem." Lodeh is a beef in coconut milk soup (not shown); gadon the yellow egg obvious in photo below; brongkos minced chicken; garang asem chicken in a gulai-like sauce. 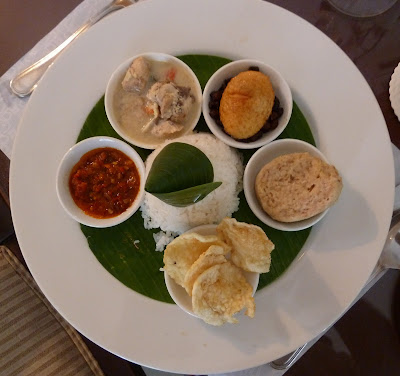 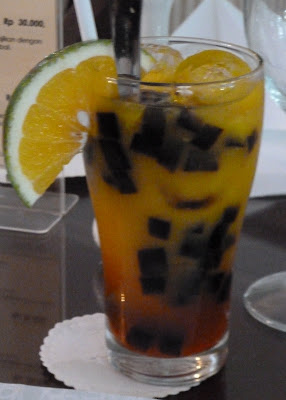 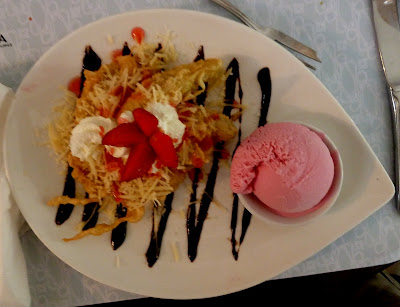 Our last dinner was at Bale Raos, a restaurant recommended by Anggoro. It was certainly popular: Sunday night was family night, with large groups, from infants to grannies, gathering for a meal and a chat. Very convivial atmosphere, in a roofed pavilion just outside the entrance to Sarinah Jaya. 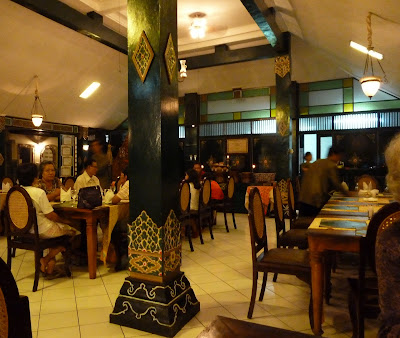 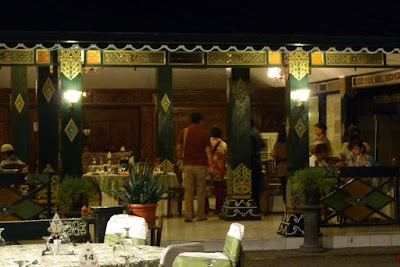 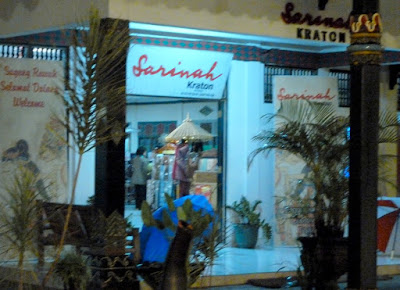 With Michael's obligatory large Bintang and my ginger lime tea, we tucked into: 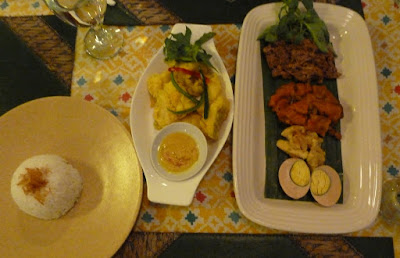 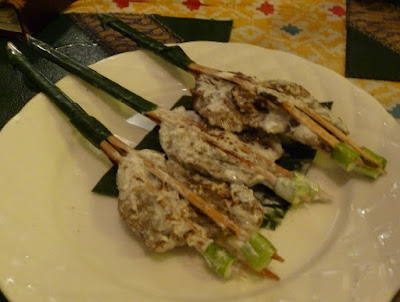 The only disappointment. This duck, Bebek Ungkep Goreng, "half duck in brown sugar, fried dengan bumbu-bumbu [with spices]," was an embodiment of my cousin Lori's son's expression that "the juice ain't worth the squeeze." 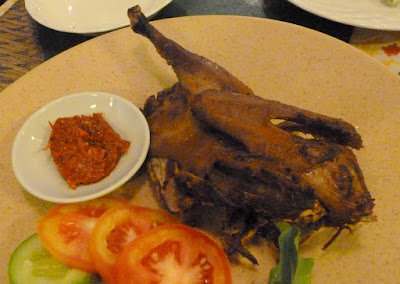 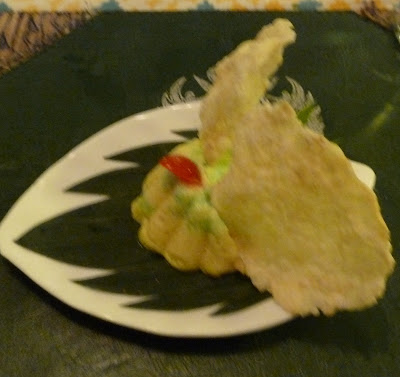 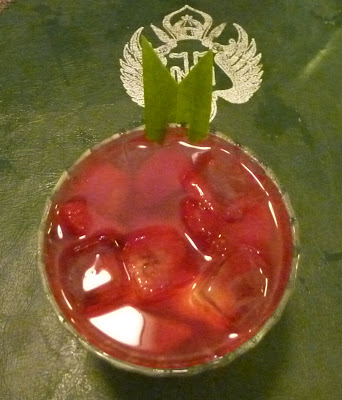 The last food we purchased was for Purwanto and Michael's office colleagues. Yogya is famous for a coconut-based sweet called Wingko, our driver's only request when we asked what we could bring him back from central Java. 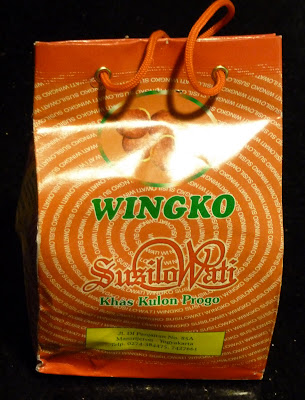 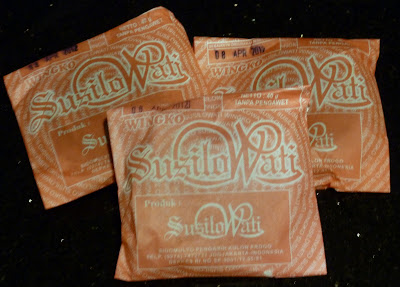 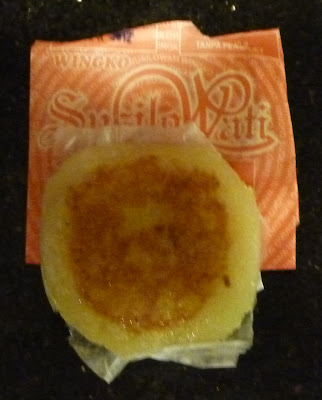 Postscript:
Here are some more Yogya treats Anggoro brought back for us from his last visit to his hometown: 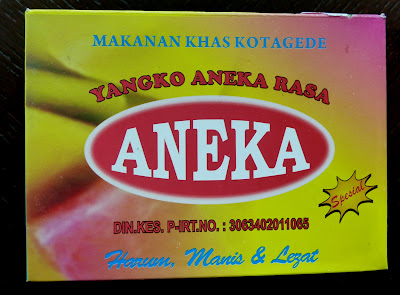 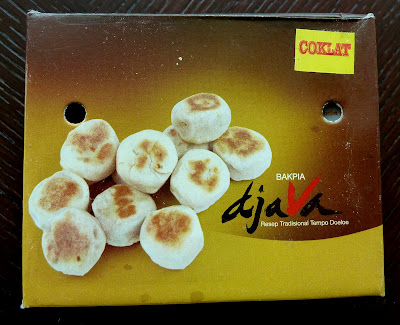 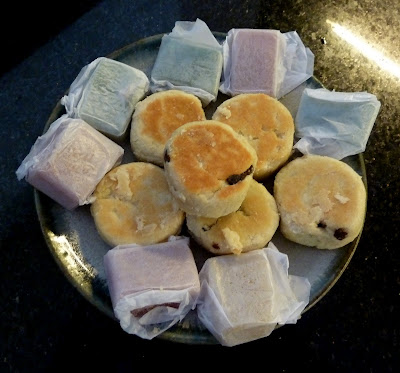 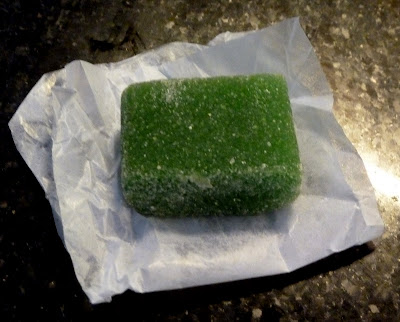 Posted by magpiemom at 9:32 AM