Sisters on the loose (day 8)

We had the British Museum in our crosshairs as the final cultural foray of this activity-packed week. If I only took advantage of what London offers in this way all the time, I might actually (a) be considerably better informed and (b) figure out how to get around town more efficiently.

Exhibition #1 was the newly installed "Afghanistan: Crossroads of the Ancient World." When I noticed it was sponsored by Bank of America Merrill Lynch, I couldn't help thinking of the spoof sign on The Daily Show, during takeover fever in the autumn 2008 crash, that read "BED, BANK OF AMERICA & BEYOND."

Crown, collapsible for easy transport; each of the multiple tree designs comes apart and can be laid flat, an ideal arrangement for a nomadic princess 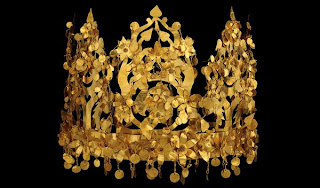 Trying to lift my thoughts to a higher level, I, like Cheri, was suitably impressed by the treasures gathered from that poor beleaguered country. President Karzai had attended the opening and he, and his people, had every reason to be proud of what had been successfully hidden during twenty years of warfare and Taliban rule (or, if stolen, repurchased). The crossroads theme was embodied in the antiquities bearing the stamp of Indian, Greek, and Roman influence. What I found most entrancing were the uniquely Afghan burial ornaments, laid out as they were found in funeral sites. Below are a group of images from the internet. Apologies to the photographers for not asking permission for these and the Egyptian photos to follow. This blog is only occasionally viewed by family and about five friends, so please don't sue me. 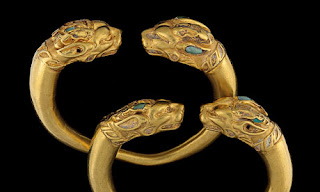 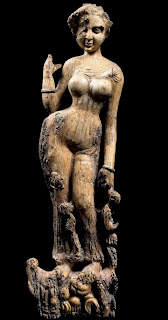 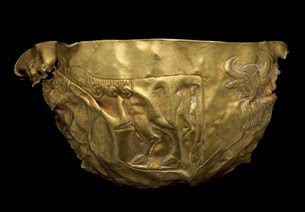 The film we watched before entering the exhibit alerted us to this astonishing glass, about 2000 years old. It deserves two photos for sheer indestructibility. 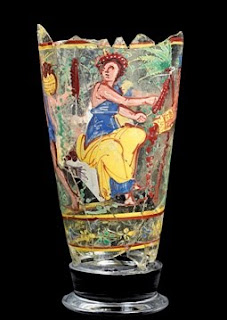 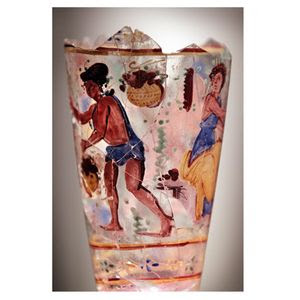 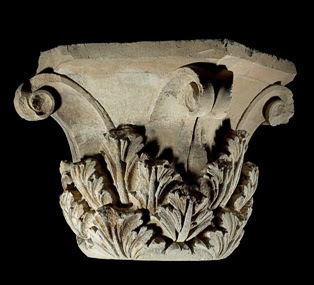 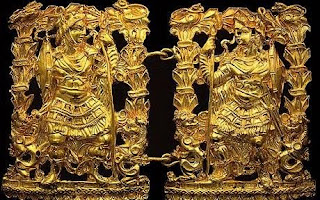 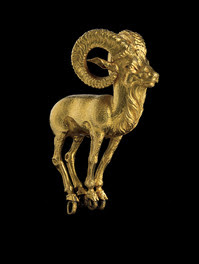 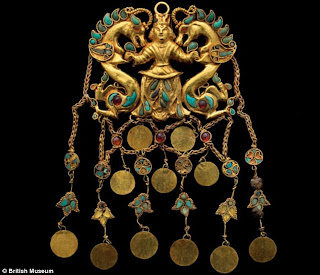 We also like the Delphic Precepts, from a Greek inscription found on a funeral monument in the Bactrian town of Ai-Khanoum:

As children, learn good manners.
As young men, learn to control the passions.
In middle age, be just.
In old age, give good advice.
Then die, without regret.

Forget the Rosetta Stone, the Portland Vase, the Benin Bronzes. Exhibition #2, "Ancient Egyptian Book of the Dead: Journey through the afterlife," was so monumental that we had to speed read—and speed look—to take in even a fraction of what was on display here alone. Books of the dead were basically scrolls of spells, the magic words that would enable the soul of the possessor to survive the journey to jackal-headed Anubis, who would weigh his or her heart against the Feather of Truth; when Thoth (head of ibis or baboon) had recorded the result, Anubis would then lead the spirit to Osiris for final judgment. Thumbs-down verdict: the crocodile/lion/hippo Devourer is waiting for that heart.

Opening of the mouth ritual. After this the soul could breathe, eat, drink, and speak. 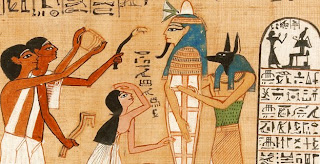 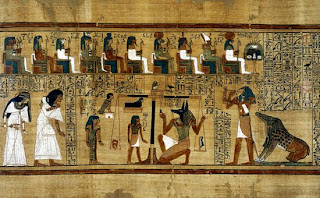 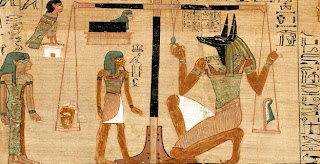 I'm not sure what's happening here, but the design is lovely. 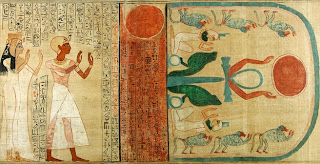 A few facts we picked up:

Buyers could commission a personal Book of the Dead or, if funds were low, purchase a shorter prefab version with blanks left for name to be inserted. Cursive hieratic script was used as well as hieroglyphics.

Spells were written on mummy cases as well as on scrolls secreted within and on the linen wrappings of the corpse. Some of these incantations would result in metamorphosis, such as changing into an ever-rejuvenating serpent. There was also a spell against the misfortune of being turned upside down, which would mean the soul would be forced to consume what had not yet been excreted.

Strips of papyrus were laid vertically, then horizontally, and pounded together to produce the famous writing material. No glue or adhesive necessary. Pens were made from reeds; the scribes used carbon for black, ochre for red and yellow.

Faces were gold and hair lapis lazuli on mummy cases to demonstrate that occupant had achieved divine status.

Heads on canopic jars represent the four sons of Horus, who himself was the son of Isis and Osiris, conceived by means of a golden phallus after his father's dismembered part was swallowed by a catfish. The canopic jars held liver, lungs, stomach, or intestines. The heart was left in the chest for judgment day.

Heart scarabs were placed on the mummy's chest to "prevent the real heart from betraying its owner." Remember that judgment scene.

Red dots on a papyrus symbolize sand. We saw one "magic brick" made of mud, with a "reed torch." The label said this amulet "prevents sand from choking the burial chamber."

Shabti are small figures placed in the tomb to do the work required of the soul. When Cheri read that the ancient Egyptian equivalent of the Elysian Fields was an agricultural paradise, she wondered whether these mummified aristocrats were going to till the soil. A couple of rooms later we found out.
Shabti figure with farming implements

The last Book of the Dead on display, revealed to the public in its entirety for the first time, was the Greenfield Papyrus, donated to the British Museum in 1910. It is 37 meters long and contains eighty spells, inscribed for the daughter of a high priest. This wasn't a scholarly archaeological find but an 1880 purchase in a souk by Herbert Bunce Greenfield, an engineer from Derby working in Alexandria.

There was more, of course, in case after case, room after room: mummy cases, amulets, scarabs, jewelry, a set of miniature Shabti tools, papyrus and linen scrolls in abundance. What one had to keep in mind was that apparently only 10% of the population could afford a Book of the Dead burial. The remaining 90% were wrapped in a shroud and unceremoniously dumped in a desert pit. No afterlife for them, I guess. Or perhaps they could become human Shabti.

Despite the need to get home and make final preparations for Cheri's early evening departure, we somehow managed to eke out just enough time after sating ourselves on Book of the Dead lore to drop by two gift shops. The cheap and cheerful first was where Cheri bought the postcards she uses for conversation with her English-language students in Germany and I found us each a red stone heart to remember the weighing ceremony of Anubis; the second, a trove of expensive replicas, was where I succumbed to an unusual woven cloth basket from Swaziland. Despite being in nice neutral shades of taupe, its eventual location in our cluttered flat is far from certain.

Color isn't true, but shape and almost feathery texture are. At £40 - 10% member's discount, these may have been the cheapest items in the main shop. 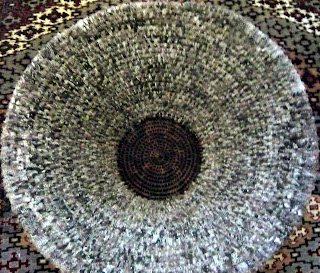 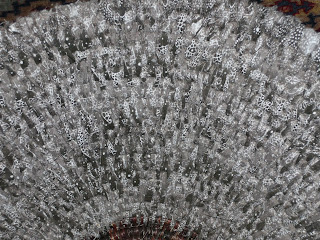 So there we go. Like the slogan for the film "Morons from Outer Space," we came, we saw, we did a little shopping, failing to complete our sentences the whole time. Eight wonderful days and evenings, too quickly over. 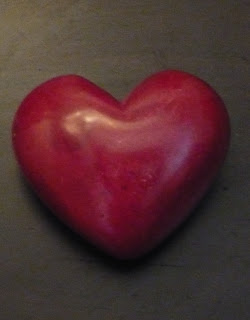 Posted by magpiemom at 8:41 PM