Sisters on the loose (day 4)

A lazy Sunday morning before catching the 344 bus (just a short stroll up Southwark Bridge Road from the flat) to Liverpool Street. First we dropped by Lush to pick up a pomegranate seed skin lozenge that Cheri loved and needed to replace. She treated me to one, too, and I'm a convert — to their BIG shampoo with sea salt as well.

Spitalfields Market was next on the itinerary. At one of the very first stalls, we each bought a scarf. Poor Cheri is always coerced into posing because I'm the bullying big sister with the camera. 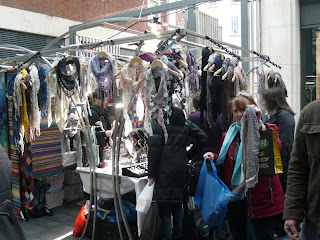 After that we wandered around happily purchasing nothing but peering into every stall, until Cheri spotted Caribbean versions of one of her favorite UK treats, Cornish pasties. She bought one curried lamb, one jerk chicken, and held my place at an open picnic table while I picked up hot cider and a delicious boxed salad from Rainforest Creations. 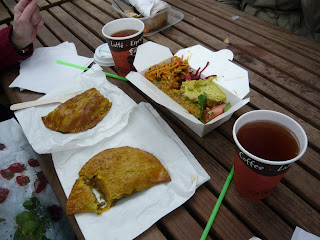 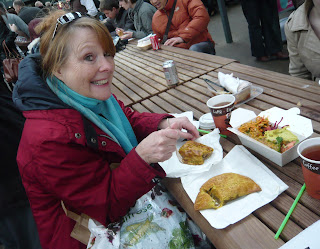 We took a break from staring at funky clothing and sauntered out of the market in order to see Nicholas Hawksmoor's Christ Church (photos via Google images) and Brick Lane. 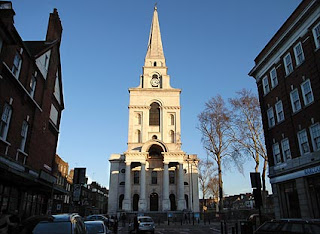 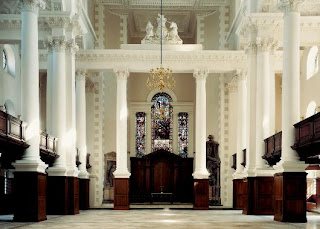 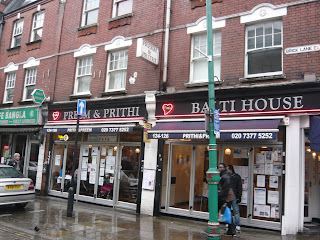 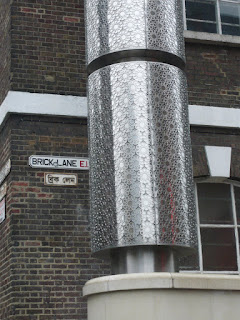 These bags in a terrific Indian supermarket are all filled with rice. We picked up parathas, saag paneer, and, surprisingly, hard-to-find citric acid. I'll be back! 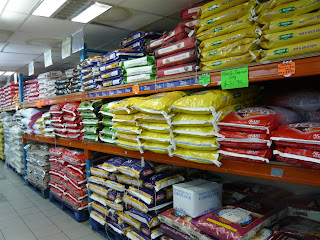 After inspecting a couple of disappointing vintage clothes shops and the tempting but too expensive All Saints (photo of Portobello Road branch in tomorrow's post), we returned to the market and got lucky. 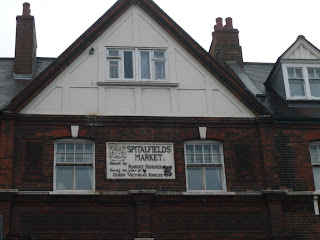 Cheri found a lovely used camel's hair coat for £25, with black leather gloves in the pocket that alone were probably worth that. For the same price, I bought her an early birthday gift, a German brown leather jacket, nicely aged, from the 1980s. 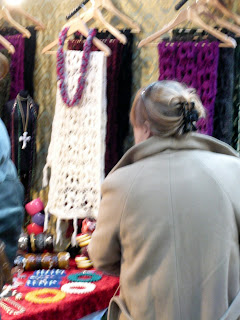 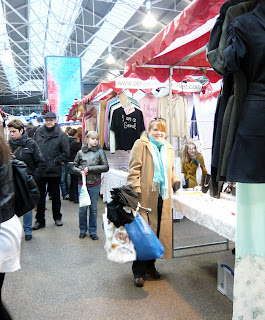 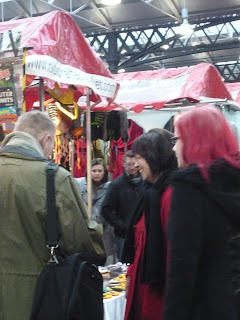 The Dennis Severs' House was next, on Folgate Street, a couple of blocks from the market. Below are Cheri's comments on this restored residence of a prosperous (imaginary) Huguenot family whose fortune was made in the silk weaving trade. Dennis Severs (1948-1999, Guardian obituary here) has been criticized for his cavalier approach to period detail—an eighteenth century room here, a seventeenth century room there, anachronisms everywhere—but his emphasis was on atmosphere, storytelling by way of sounds, sights, and smells, to create the sense of a family that has just left the rooms as you arrive. David Hockney is quoted as saying that the house is "one of the world's greatest works of opera."

Wouldn't Dennis be surprised and delighted to see his vision and the elusive Family Jervis still going strong 12 years later? Thanks again for those magical moments!!! I still have vivid memories of the crackling fireplaces, half empty glasses + plates, fresh vegetables, strewn clothing.........and overall cozy atmosphere, with exception of the C.Dickens scene upstairs, what a dramatic contrast!

We couldn't take photographs, but Google images has come through once more with the pictures pasted at the end of this post. For more evocative close-up details, however, and some fascinating stories behind the objects Severs collected, see http://www.flickr.com/photos/dennissevershouse/, http://spitalfieldslife.com/2010/03/08/simon-pettets-tiles/and http://spitalfieldslife.com/2010/04/06/isobel-barkers-hat/. The 20th-century story of a community of artists and free spirits is in its own way as compelling as that of successive generations of Jervises.

Click on this link for a poignant account of another house in the neighborhood, the end of an era as the gentrification of Spitalfields continues: http://spitalfieldslife.com/2010/01/23/all-change-at-27-fournier-st/ 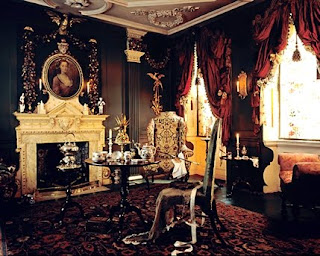 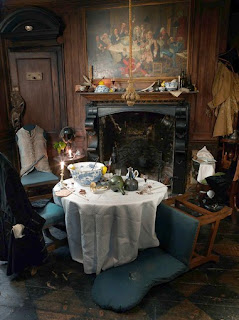 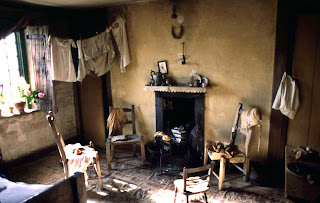