Sisters on the loose (day 6)

One destination only on day 6: Hampton Court Palace. We had thought a visit to Tate Modern might get squeezed in on our return, but it turned out we could have spent two days at the palace. Being so close, Tate Modern was always on our daily list as a possible last quick stop. Not to be. I finally got to the Orozco (no, we hadn't heard of him either) exhibition with Jackie F. the week after Cheri left, so will put up a later post with borrowed Google images to show what was missed.

We checked bus schedules to get out to Hampton Court, but that method of transport would have involved several changes, therefore requiring an alertness in unfamiliar territory that we didn't feel quite up to. I can see Michael nodding his head here (mentally changing "quite" to "at all") and agreeing we made the right choice when we elected to go straight from A to B in 35 minutes via train. With Cheri's Oyster card and my Freedom Pass, it was surprisingly cheap as well.

East Molesey, Surrey, the town that surrounds the palace, is rather less than charming, especially on a cold and overcast day. Crossing the bridge over the Thames just outside the station took us immediately to Hampton Court, so we never investigated whether our initial impression of the environs was unfair.

While you couldn't call the palace beautiful in the sense of a French château or a German schloss, it is undeniably imposing. 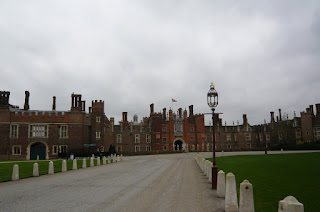 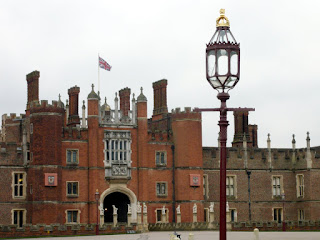 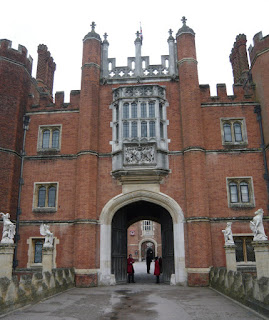 To the left of this approach to the building we saw a grand collection of mistletoe balls: 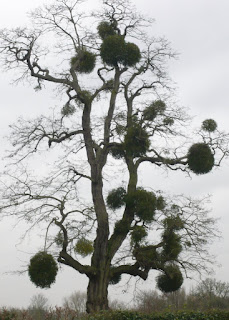 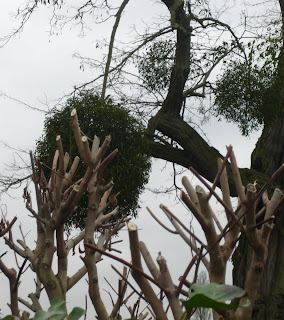 And in the first inner courtyard, who but Henry VIII and one of his ministers, perhaps Thomas More or Thomas Cromwell. These statesmen didn't fare any better than Henry's queens: both were executed. More likely, though, this is another Thomas, Cardinal Wolsey, who managed to die of natural causes before sentencing, but not before Henry had appropriated the palace he had restored and expanded on this site. [To add to the Thomas confusion, there's also Thomas Cranmer, Archbishop of Canterbury, who survived Henry but was burnt at the stake by his daughter Mary. I need to watch A Man for all Seasons again, where they all appear.] 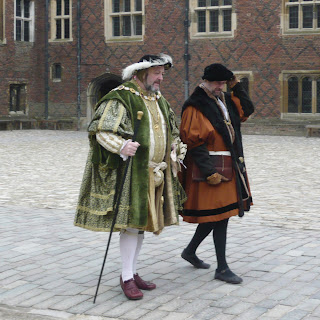 Henry then spent the equivalent of £18 million bringing the palace up to royal standards, so much so that none of his three children, Edward, Mary, and Elizabeth, made many alterations despite spending time there. Even the spendthrift Stuarts were fairly frugal. It was William & Mary who really left their imprint, commissioning Christopher Wren to revamp the entire property. William wanted to bring in the wrecking balls, but cooler heads prevailed; Tudor and baroque now coexist fairly harmoniously. 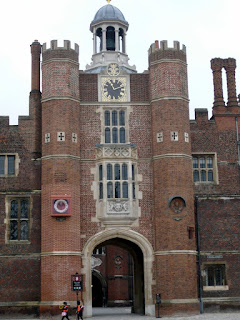 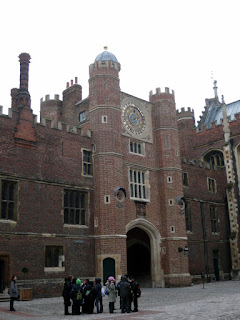 close-up (from net) of astronomical clock in previous photo, c.1540 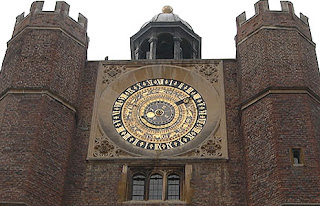 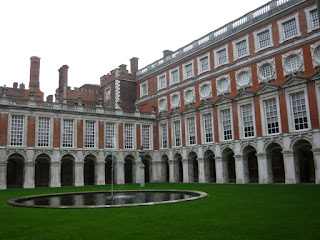 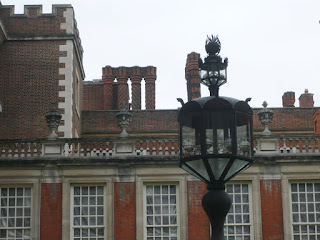 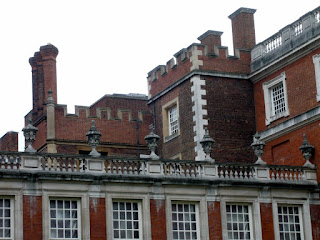 Cheri thought of Gaudi as soon as she spotted these Tudor chimneys. 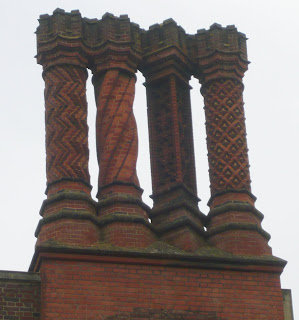 We gazed at this privy garden out a window, but weather and season of year kept us from seeing the other landscaping features shown below. Most of the work here ( restored rather than original, of course) was done after William III became a widower; his successor, Queen Anne, refused to pay many of the bills after his death in 1702. 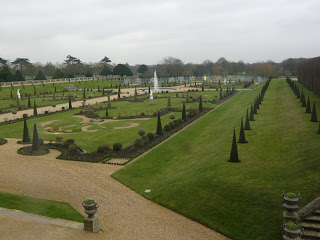 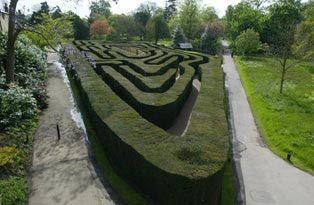 The Great Vine, planted under supervision of Lancelot "Capability" Brown in 1768, is the largest grape vine in the world according to Guinness Book of World Records. Grapes are not made into wine, but sold to visitors in September. 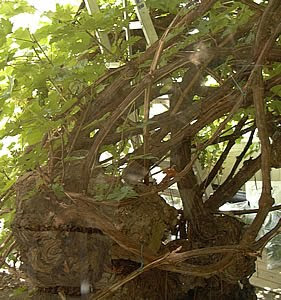 Nice views for those lucky enough to live in "Grace and Favour" apartments, generally awarded for dedicated service to the monarchy or the country. Among former "Grace and Favour" residents were Grand Duchess Xenia, sister of Nicholas II, the assassinated Czar of Russia; Professor Michael Faraday; the daughters of the Maharajah of the Punjab, who surrendered his lands and the Koh-i-noor diamond to Queen Victoria in 1849; and the widows of Ernest Shackleton, Antarctic explorer, and Robert Baden-Powell, founder of the Boy Scouts. 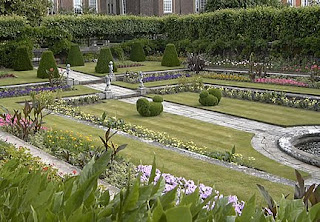 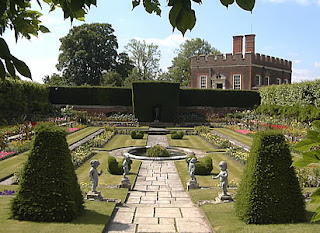 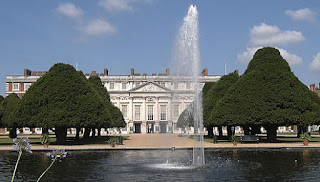 Inside, we wandered through room after room, corridor after corridor, with some clever historic presentations in the Tudor wings. We encountered two wonderful guides, one male, one female, who were both friendly and extraordinarily informative. I'm racking my brain here to try to remember some of the choice historical nuggets they passed on. Nothing there. Should have scribbled down some notes. All I can recall is that the Queen Caroline who decorated some of the newer state apartments was not as I had thought (having heard of only one Caroline) the estranged wife of George IV, so cruelly lampooned by Cruikshank and others, but the totally respectable and revered consort of George II.

Since furnishings were fairly scant—a state bed here, a tapestry there—my recollections of what we saw are as patchy as they are of what we heard. Here are a few of the more memorable rooms in William & Mary's extension, not necessarily dating from their reign. 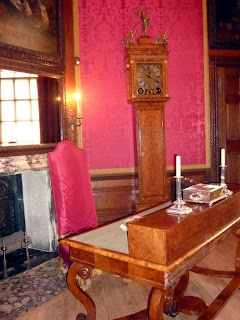 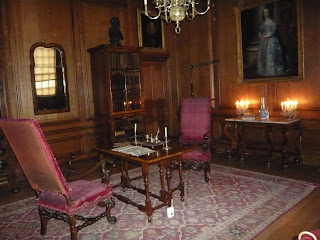 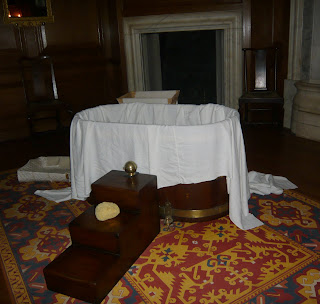 Yes, this is a royal toilet. 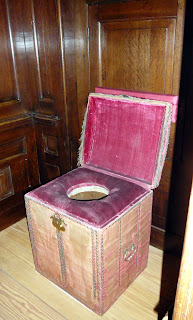 Time was running out, so we raced to the Chapel Royal, with its fabulous Tudor ceiling. 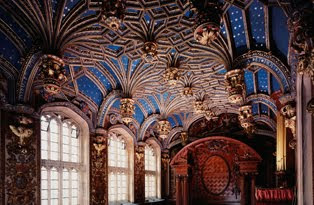 Little did we know that we should have been racing around even faster. After a quick snack, we decided to zero in on the wine cellar and kitchens. When I booked our tickets online, however, I had failed to note that during the winter Hampton Court closes at 4:30. We never did find the wine cellar and the kitchens had been shut up at 4:00. We were politely but unceremoniously shooed out and the gates were, literally, locked behind us as we exited. I've stolen two more pictures from the net to give an idea of what we would have seen had we organized our timing better. 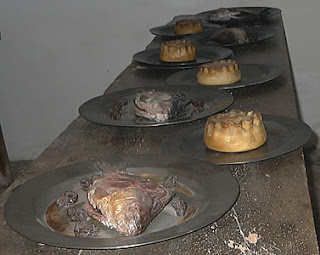 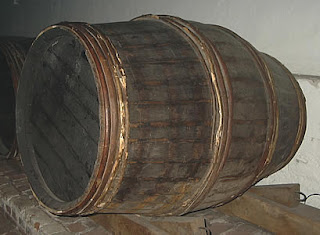