First few paragraphs of a Telegraph article (Philip Johnston, 12 Oct 2009) on the expenses scandal in today's House of Commons. I'd never known exactly why the present Houses of Parliament are so much younger than other Westminster buildings.

The conflagration was so intense that its glow could be seen in the distant lanes of Surrey and Kent. It was 175 years ago this week that the medieval Palace of Westminster, the home of the nation's parliament for 300 years, was burned to the ground.

The calamitous fire was caused by the incineration of tally sticks – notched pieces of wood that for generations had signified the payment of tax and which had been stored under the House of Lords. Some years after the Exchequer had stopped using this method of counting, a great pile had accumulated and rather than give them away as firewood to the poor, which would have been sensible, it was decided to burn them.

On the night of October 16, 1834, they began to load the sticks into the furnace. The blaze was so great that people walking on the floor above could feel the heat. Soon, the vaults were set alight and the ancient, mainly wooden, building was an inferno. Thousands came from miles around to gawp at the loss of the nation's legislative home (though, mercifully, the splendid Westminster Hall survived intact). Among the throng on the banks of the Thames that night was the country's greatest painter, JMW Turner, who made a sketch and later captured the spectacle in several magnificent oils.

One spectator said the fire was "certainly the grandest thing we have ever witnessed" and commentators called it divine retribution for the gluttony and activities of the legislature, notably in passing the Reform Act just two years earlier. Imagine what they would say today were the familiar Gothic building that replaced the old palace to catch fire: if extending the electoral franchise and the abolition of the rotten boroughs was considered worthy of the wrath of God, what about rapacity on a grand scale? 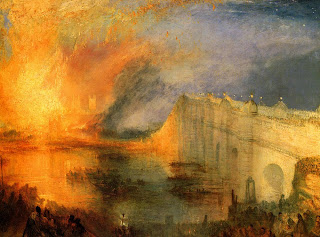 Posted by magpiemom at 5:27 PM