Michael's first gift this drizzly birthday morning is an e-mail from someone at the History Channel asking for some advice on sand for series 2 of the Life After People series. Many thanks to Alan Smith for putting the woman in Sherman Oaks, CA, in touch with his former grad student. Adds a little excitement to life even if, as is quite likely, Michael's labors will be unremunerated. The questions she needs answered finally came through yesterday (30 Sept), and they're going to require a lot of research on subjects like aeolian sand erosion of concrete structures. Michael's hoping their time frame will allow him to get back to London and his own library plus that at the Geological Society. On verra (we shall see).

Our only fresh-squeezed orange juice on the trip appeared at this breakfast, along with dense loaf cakes that must be a Breton tradition (fortunately—or malhereusement for our ever-thickening ligne—there were also croissants and excellent bread). After wrestling our suitcases down the narrow outside steps from the second floor, we drove to Intermarché, where we sheltered from a massive downpour while picking up some single malt for the birthday boy and the wherewithal for a picnic or, as it turned out, in-car lunch.

This day's adventures began by looking at beaches and former fishing villages like Perros-Guirec and Ploumanac'h along the Côte de Granit Rose. That pink granite had been sculpted by erosion into surreal shapes along the Sentier des Douaniers (Route of the Customs Officers—who were looking for contraband from England) and near Tregastel (sounds Cornish, looks Cornish), which locals had given names that translate as "Napoleon's Hat," "The Witch," The Upturned Foot," "The Skull," "The Corkscrew," "The Stack of Crêpes" (very French, those last two). I haven't a clue which ones we're looking at in these photos of both the craggy and smooth rock formations. 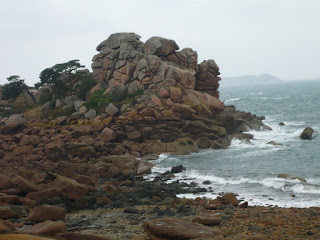 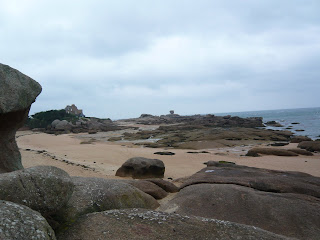 There are lots of quarries round about since the pink granite is much in demand for gravestones. For more whimsical uses of the rock, we chanced on this rather unkempt sculpture park in Ploumanac'h (plou, meaning parish, is the first syllable of a great many Breton place names; we haven't discovered the significance of the frequent apostrophe). A few of the better results of sculptors trying their hand: 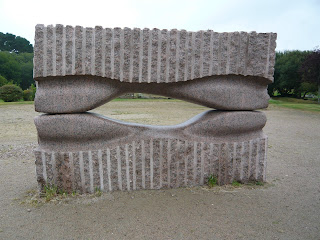 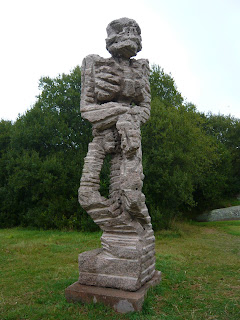 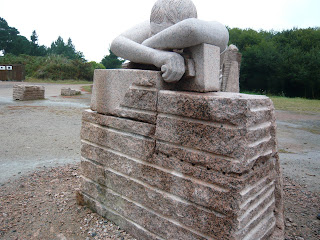 And my personal favorite: 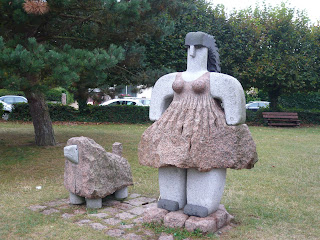 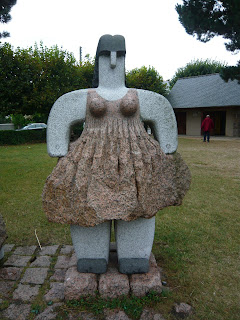 More scenes along the corniche and inland: 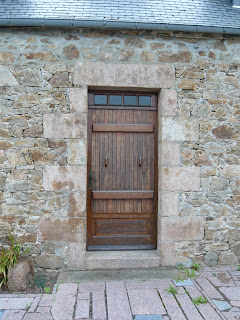 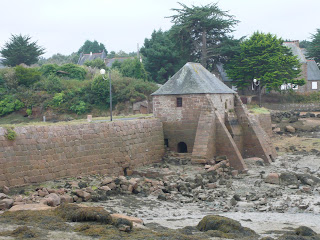 And a photo I could have taken many, many times: 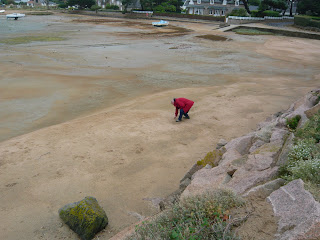 Our next stop was a sop to me: Lannion, a town famous for its 15th- and 16th-century half-timbered houses. I've also included close-up photos of the carved caryatids characteristic of the architecture here. 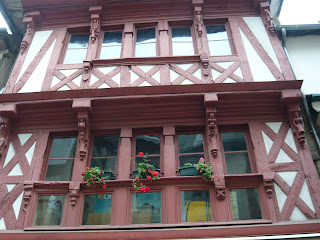 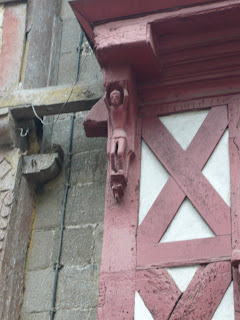 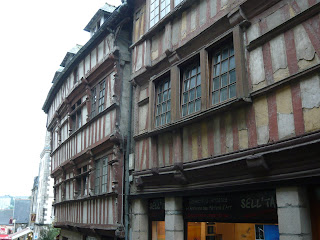 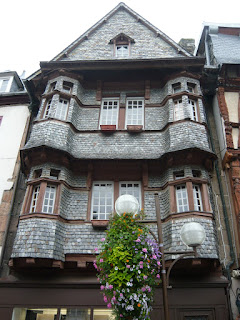 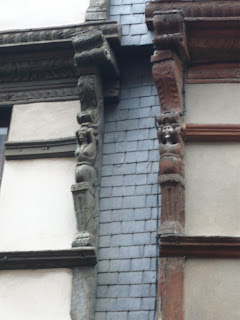 A while later we were munching our baguette, cheese, and salami in a parking lot at St-Michel-en-Grève. Most local lore in this very Catholic region centers on saints, but here there's a more recent 19th-century tale of Yann Ar Moch (John the Pork Butcher) who unleashed wild dogs on travelers who refused to pay the ransom he demanded. As our guidebook to Brittany & Normandy (Thomas Cook Publishing) said, "None of the bodies of Yann's victims was ever found; as he boasted after his capture—the Lieu de Grève was 'the best kept cemetery of all.'"

In these post-Yann days, it's also a mecca for sand yachters. We figured the dismal weather meant we wouldn't see any, but no, wet sand must provide a good surface. Michael tried out his new video camera as well, and captured the moment when one of the yachts toppled over (no harm to vehicle or "sailor"). 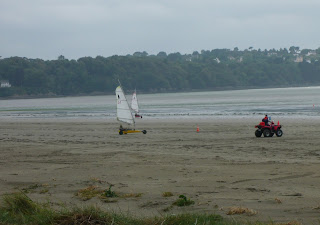 Turning around in a driveway on the way out of the boat launching area, we spotted another German pillbox, overgrown but still very obvious in the garden of a well-kept home. Would have taken a photo, but another vehicle was waiting to turn in, so we had to hurry out and continue our way along the Corniche Armorique. "Armorique" was the name early Celts used for what later became Petite Bretagne, when more Celts from the "Briton" tribe arrived in the 5th century AD, chased out of Grande Bretagne by the marauding Angles and Saxons.

We drove past Morlaix, where the 5-yr-old Mary Queen of Scots had stayed in a convent on her way to Paris in 1548, already promised to the Dauphin of France, though the marriage didn't take place until 1558. More significantly for Michael, we also passed by Coreff. In1985 two Frenchmen who had fallen under the spell of real ale in Wales set up a brewery there. We managed to find some in a nearby Leclerc supermarket and it was indeed much better than the usual French brew. This Leclerc, like the Intermarché earlier in the day, had undercover parking, something we never see down in the much drier Laroque area.

Whizzing by signs pointing to a lot more towns beginning with Plou, we eventually arrived in Finistère, from the Latin finis terrae, "end of the world"; the Bretons, however, called it Penn-Ar-Bed, "the beginning of land." Michael had decided he'd like to spend his birthday evening at the farthest western point of Europe, the rocky Finistère promontory of Pointe de St-Mathieu. The Hostellerie de la Pointe St-Mathieu was our most extravagant evening of the trip, again ***, but the high end of that category. 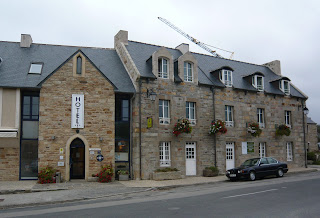 Before dinner, we strolled across the road to see the lighthouse and the Benedictine monastery (begun in the 11th or 12th century and allowed to fall into ruin once the monks were driven out during the French Revolution). Michael was pleased to be standing on rocks of the Armorican orogeny. Just as Armorique became Bretagne, this orogeny has also lost its Breton roots and is now known as the Hercynian, though that too seems to have "proto-Celtic" roots. Whether geological or linguistic, this is all news to me. 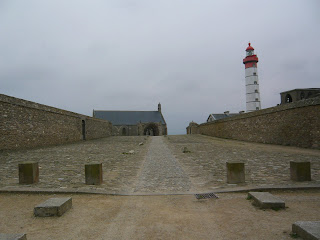 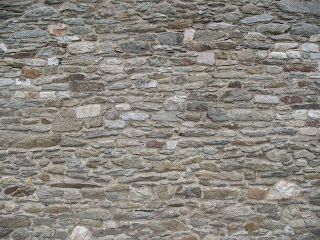 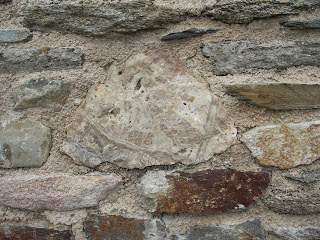 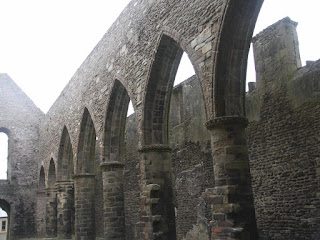 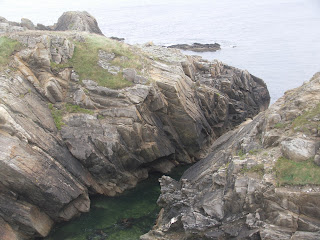 Dinner here was fromage ou dessert, just as well since "and" instead of "or" is a sure recipe for indigestion and, as you'll see, this meal was rich enough as it was. Michael began with a crab, clam, and foie gras crême brulée; my starter was far more foie gras based: a macaroon filled with foie gras cream, intensely citrusy foie gras cubes wrapped in duck, and a foie gras/apple mixture, all delicious.

I chose turbot for my main course, and Michael this elegantly presented magret of duck, served with a crispy rolled assemblage of carrot, onion, and courgette: 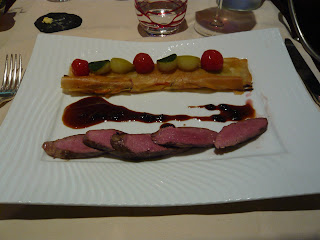 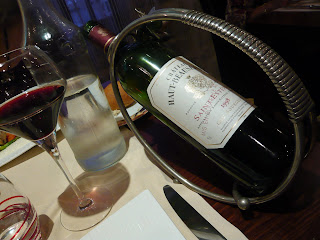 We didn't follow the "eat dessert first: life is short" maxim, but this last course would be a pretty damned good reason to do exactly that. Michael (first photo) chose from the dessert cart; the best was the fresh berries on top of some sort of cross between yoghurt and sweetened creamy cheese. My finale was a strawberry sorbet and chocolate millefeuille. 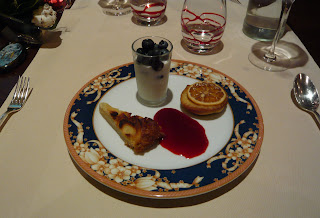 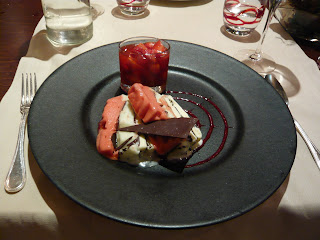 Posted by magpiemom at 9:55 AM