Beating the Scots at their own game

Michael tore out this piece from The Economist and left it for me on the breakfast table (which is also our lunch/dinner table and coffee table, as anyone who has had a meal with us in London is—no doubt uncomfortably—aware).

Here in the UK, Scotland is famous for being the home of the deep-fried Mars bar. Texas has topped the Jocks, as Sassenachs call their friends up north.

Come fry with me

A new way to serve a ball of butter 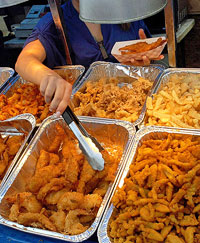 ON A fine afternoon at the Texas State Fair, a ringmaster encouraged a gaggle of children to flap their arms like butterfly wings. “What could possibly go wrong on a day as beautiful as today?” he asked. But a hundred yards away, something had gone quite wrong. People were queuing for an unusual delicacy: balls of butter, dipped in dough and cooked in a vat of boiling oil. Fried butter, in other words. The balls were dusted with a thin coat of powdered sugar. When bitten, they collapsed with an unctuous squelch.

Fairs are known for their decadent snack offerings. Most are unhealthy, and some push the conceptual boundaries of food into new territory. The Los Angeles County Fair, which ended on October 4th, featured a Meat Lovers’ Ice Cream Cone (don’t ask). The Minnesota State Fair is known for its foods-on-a-stick. The Texas fair bills itself as the fried food capital of the state.

The claim is credible. Sprinkled between the pig races and carnival rides are vendors selling fried ribs, fried guacamole, fried ice cream and even fried bacon. Fried butter is a new development. At the beginning of the fair it won an award for creativity. The inventor, Abel Gonzales, won the same award in 2006 for a different recipe—fried Coke.

Nutritionists would shudder at all the fat, sodium and trans-fats. Defenders say that the key is moderation. “If this is not your lifestyle, then it’s OK to indulge once or twice a year,” says a spokeswoman for the fair.

Opinions among fairgoers were divided. A woman selling toffee said that people had no business frying butter, with diabetes and high cholesterol as common as they are. She said she preferred to cook with olive oil. But a man eating a basket of fried butter with cherry jam was not too bothered. “It’s just butter,” he maintained.

Posted by magpiemom at 9:19 AM