One week from d-day

That's a lower-case "d" for departure. Let's see. It's 2:30 in the afternoon here in Jakarta today, which means 8:30 a.m. in London. We would have finished breakfast by this time last Wednesday and have been getting ready to head for HSBC to pick up the new internet banking code devices that Michael had discovered on Tuesday were about to be issued. Lucky we were booked on an evening flight.

We then basically did nothing but clean until the taxi arrived to take us to Heathrow in the early afternoon. Michael lugged our four very heavy suitcases (£183 overweight surcharge -- and that was a relief, because the woman at check-in gave us an extra ten kilos apiece) down two flights of steps to be ready to be piled into the car. Here's a photo of our four pieces of hand luggage at Singapore airport: fortunately they weren't weighed. 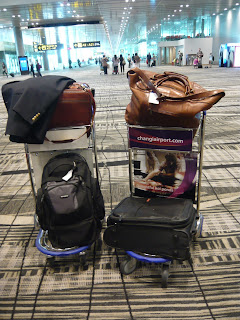 Back to Heathrow. Thanks to business class tickets, we were able to enjoy the lounge, where we had a post-lunch sampling of some tasty Asian cuisine. Then, before we had a chance to be bored, we were experiencing the moment we'd been anticipating for a few months: sitting in our very comfortable seats, clinking our champagne glasses in a toast to the future (and to a friend in hospital).

The Singapore Air stewardesses were as gracious and lovely as I remembered from seventeen years ago. I'll find some images on the SA website to illustrate the experience.

We had two middle seats. As Michael pointed out, there was a screen we could pull up between them if one of us irritated the other. 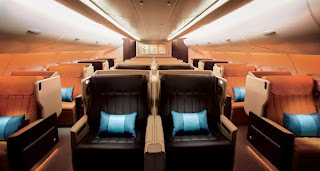 This sleeping arrangement was extraordinary. I've never dozed comfortably on a plane before. 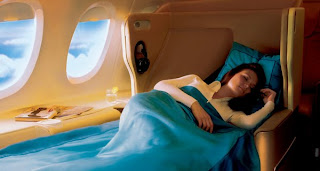 Here you're looking at a photo of first class seating. It's a bit roomier and the screen is probably bigger, but we also had the attentive service, linen napkins, and limitless supply of hot towels to mop our not-so-weary brows. 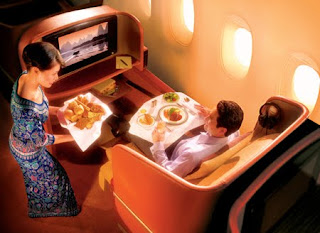 The food and wine weren't your ordinary long-haul fare either. The champagne I mentioned earlier was Bollinger; I had a 2008 Tinpot Hut Sauvignon Blanc with my "Thai-style fried fish with spicy sauce served with seasonal vegetables and steamed rice," while Michael drank the same white with our satay "prelude" and "tian of crabmeat with 'Bloody Mary' dressing," then a 2008 South Australian St Hallett Faith Shiraz with his "Oriental roast duck and barbecued pork with rice." We were too full to taste more than a spoonful of the Bailey's white chocolate mousse.

When you enter Changi airport, it's a real case of "Toto, I've a feeling we're not in Kansas anymore." So unlike Stansted or Heathrow (though terminal 5 is pretty good) or Perpignan or Philadelphia airports. 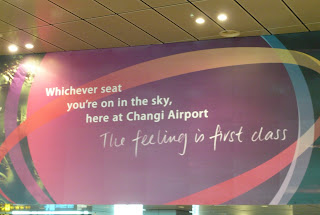 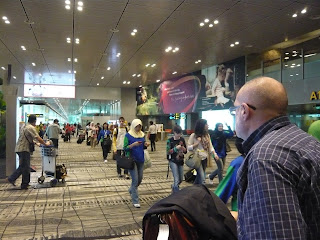 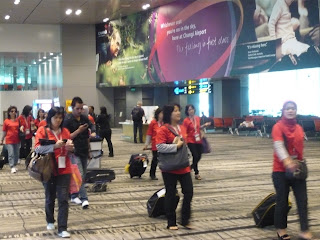 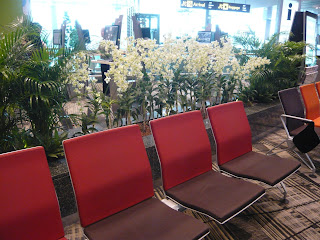 Sent off an email at one of the free wireless stations behind the orchids. 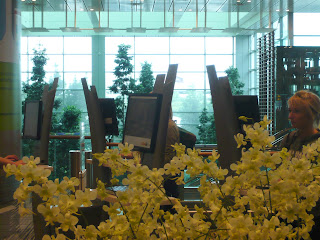 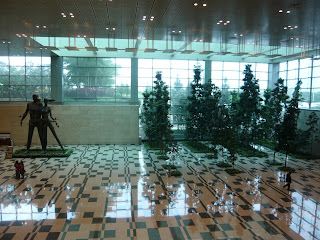 Greenery and sculpture above, now with telephoto. 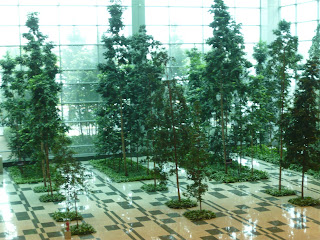 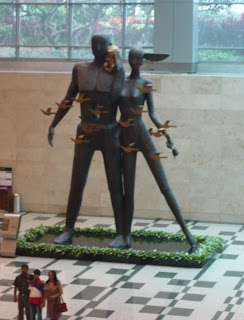 For you, Dad, a stainless steel escalator and elevator. 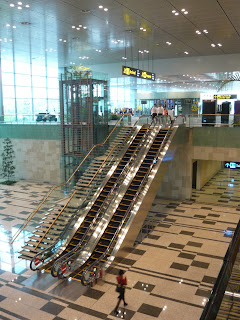 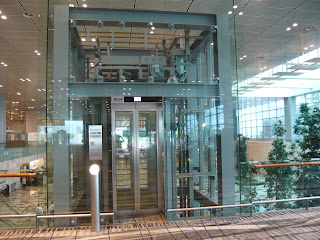 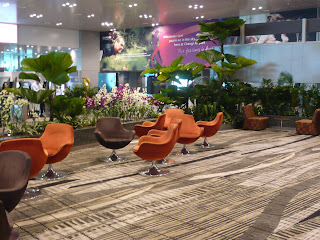 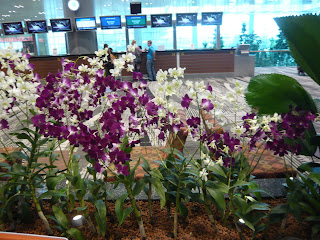 I thought the interior landscaping in terminal 3 was worth photographing. Then we took the skytrain to terminal 2. 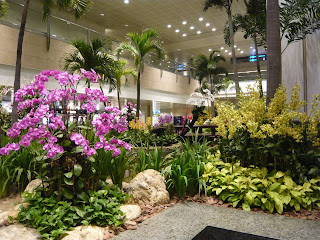 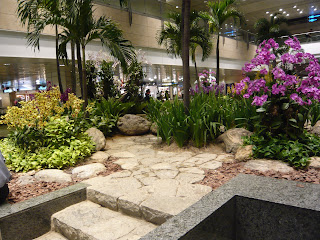 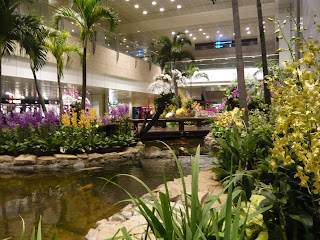 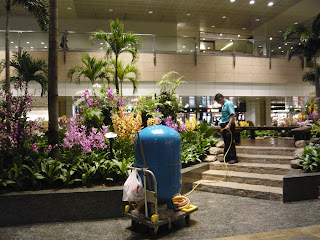 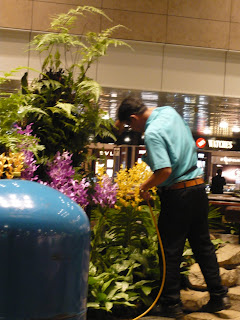 Surely Changi must be one of the most stunningly designed and well-tended airports in the world. As we looked out at the multistory parking (through polka dot glass), Michael spotted bougainvillea blossoming. 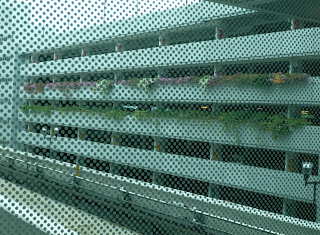 Children are catered for as well. This is a drawing area
. 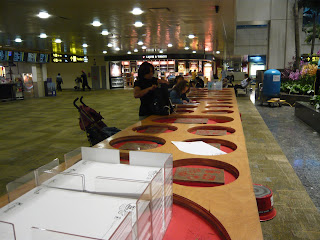 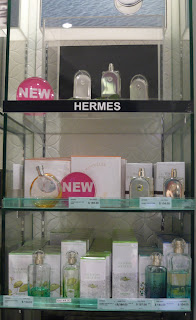 Last, here's the Silver Kris lounge where we whiled away a few hours waiting for the flight that would see us in Jakarta about 24 hours after the taxi had picked us up on Southwark Bridge Road. Very strange sensation, this lost day. 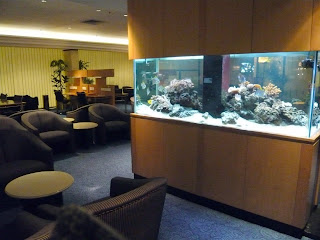 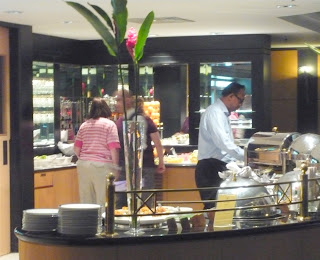 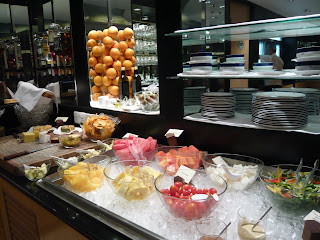 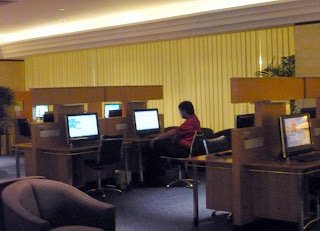 You can take a shower in the ladies' loo. This spot is more memorable, though, as the place where I managed to leave my camera when washing my hands. Efficient as always, the steward on board the plane organized having it whisked from the bathroom to my seat within about fifteen minutes after the horrible but -- yes, Michael -- all too familiar discovery that something was missing from my purse. 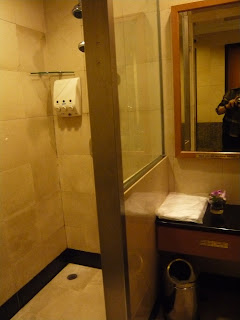 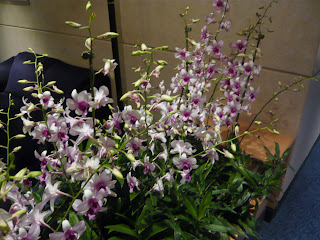 Posted by magpiemom at 8:26 AM