At 7:30 Michael heads for the office via the best "commute" he's ever had: down the elevator, through the lobby, past security (we're only checked on way in), to another elevator. Exit into Pacific Place Mall, make a left toward the pedestrian passage that leads to the Stock Exchange Building, through a security check, up an escalator, through another lobby, and then a final elevator to the Asia-Pacific Exploration Consolidated office on the 28th floor. About fifteen minutes door to door, including waits for the elevators.


View of Michael's office building from our balcony. Mark's office on the 28th floor is visible if I knew where it was. 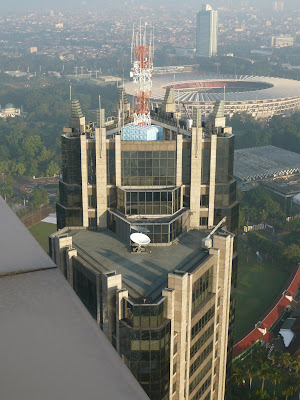 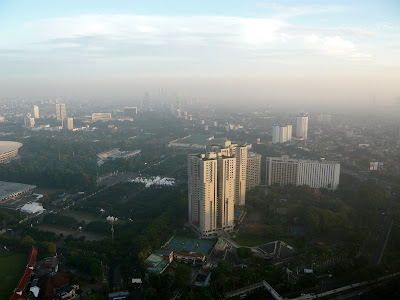 Close-up for Kate & Iain plus other friends who spent some time here with Arco. 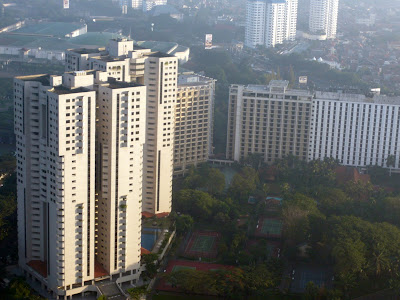 Tents at left of former Hilton Residence were for a celebration that went on—very audibly— into the early hours of the morning over the weekend. 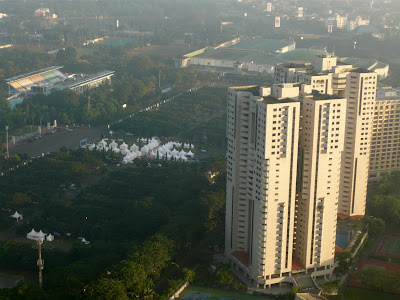 Part of the view through one living room window. Into every life a few bird droppings must fall.... 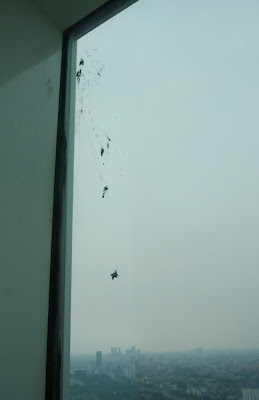 While Michael is laboring to put bread and the occasional bottle of wine on the table ("occasional" key word here—only relatively low-alcohol-content beer is affordable), I unpack suitcases and dial 0 to report to the concierge that one sink plug isn't connected and one toilet is running nonstop. Both problems are fixed within half an hour. I can get used to this way of life very fast.

Connie comes by for a chat around 10:30 and we then join Mark and Michael for a tasty chili beef and phat Thai lunch in one of the many inexpensive restaurants in the mall. We discover that ice tea is sometimes made with milk, a beverage I'll try to avoid in the future.

Next on the itinerary is a visit to Kem Chicks, on one of the lower mall levels. I've been looking forward to this. When we last lived in Jakarta, there was only one Kem Chicks, a mid-sized grocery store in Kemang that  entrepreneur Bob Sadino opened in the 1970s once he moved on from his original egg-selling business. Now he not only has this Pacific Place outpost, but the Kemang store has become the ground floor of a multi-story apartment building. Many thanks to Zakan on http://mostlyjakarta.com/kem-chicks-kemang-jakarta/http://mostlyjakarta.com/kem-chicks-kemang-jakarta/. His photograph is better than mine will be when I eventually make my pilgrimage.

Back to my hop-skip-and-a-jump-away branch:
Mangosteens, as delectable as ever. 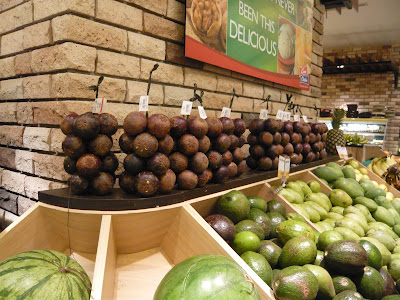 Pumpkins and squash.
Don't remember these from the old days. 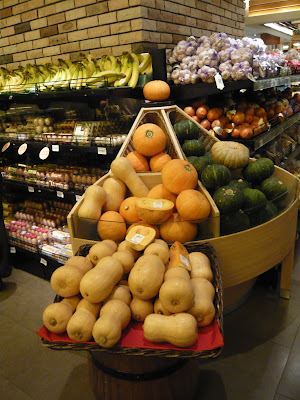 Potatoes, sweet and regular.
Connie says that the government is trying to introduce Indonesians to starch staples other than rice. 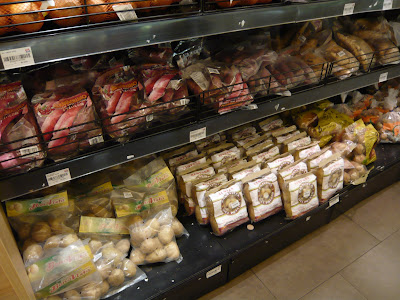 Anyone familiar with my breakfast habits will know how important this machine is to my sense of well-being. Fresh orange juice on tap. 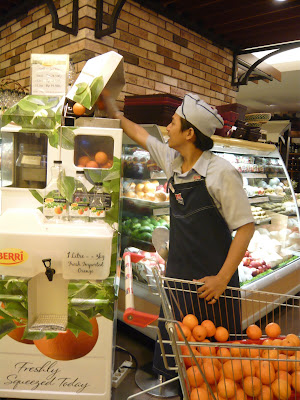 A very patient Connie with the fruits(++) of my food shopping excursion. Receipt was about a yard long, only to be expected (as I explained to Michael) when the cupboards are virtually bare. Her more modest purchases are on the chair. 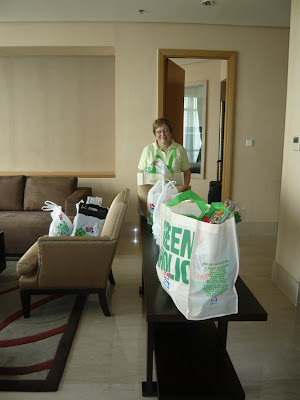 A simple steak (Indonesian, not Australian, much better than in the past), salad, and French fries dinner to begin with—and, to toast the fact that we're really and truly in Jakarta—the cheapest bottle of wine available, a Chilean red for a bit over $20. 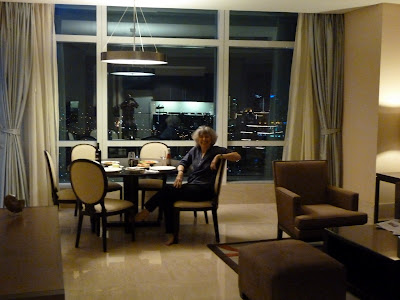 Posted by magpiemom at 9:30 AM