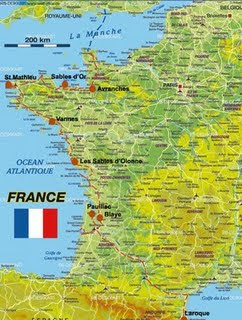 Over two months ago now. Lucky I scribbled a few notes.

Michael makes his way through the fog to collect a sand sample from the beach along the promenade before we drive off to Île de Ré. Timing has worked so that we'll be arriving the day the Forteys (minus Richard, who has had to speechify somewhere else in Europe) depart from the island, so we decide not to pester them.

En route we stop to photograph this refreshingly simple church in St-Denis-du-Payré. The most elaborate decoration is provided by the tafoni (again, see throughthesandglass) in the limestone blocks around the door. Two of the town's 370 inhabitants insisted that I take their picture as well when
I got out of the car to get a few close-ups. 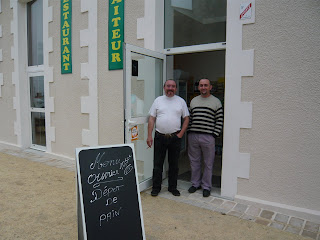 A series of four increasingly close photos. What can
I say? I'm married to a geologist. 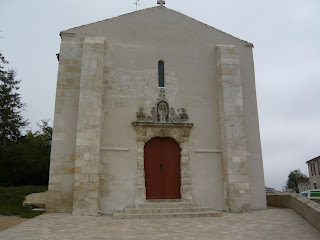 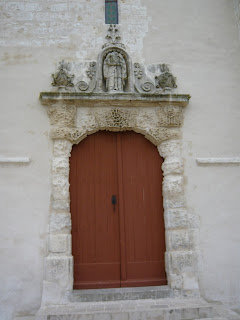 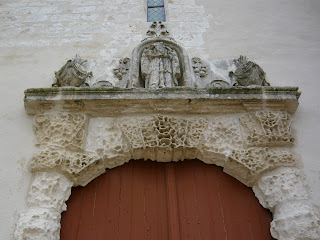 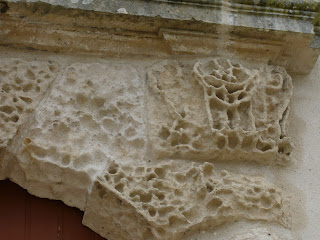 In the town of Triaize, we admired the almost Middle Eastern effect of this black steeple. The church dates from the 12th century, but the steeple was rebuilt in 1771. 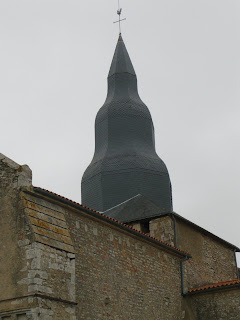 We continue through the rather unprosperous Le Pays Né de la Mer (country born from the sea), missing out on La Rochelle owing to lack of time, before paying 9€ to cross the bridge to decidedly prosperous Île de Ré; until 1988, we would have been getting to the island by ferry. Up through medieval times there were as many as four islands, the narrow channels between them gradually connected through siltage and deliberate landfill. Today's holiday haven, with more retirees than professional fishermen, and probably more bikes than cars, is a single strip of land, about 18 x 3.5 miles.

The first stop on our circumnavigation is Fred La Boulangerie [sic]. The bread turns out not to be as good as that we bought in Vannes, despite the enticing ambience and long queue of eager customers. 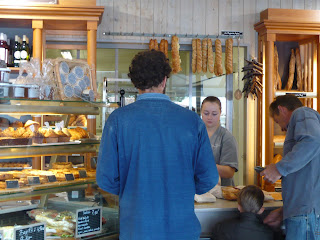 We found more tafoni at stop #2, Fort de la Prée. First constructed in 1625, two years before the island was briefly invaded by thousands of dastardly English under the leadership of the Duke of Buckingham (there's still a Café Boucquingam in St-Martin), it was renovated and reinforced by Louis XIV's hyperactive military engineer Vauban in the 1680s and occupied by the Germans 1942-45. 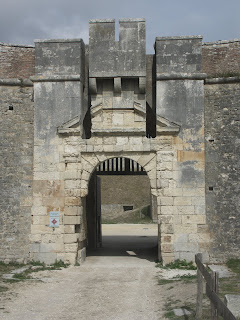 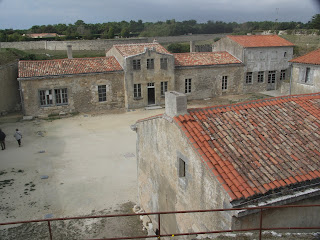 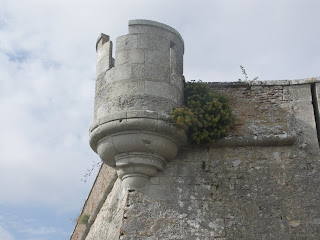 Enlarge and look closely for tafoni: 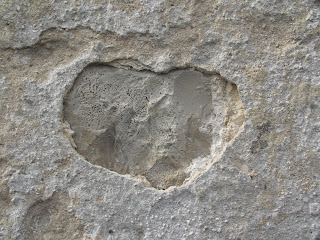 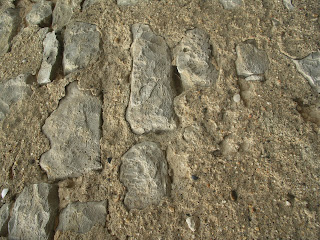 The fort was near La Flotte, where Jackie and family were staying. I had jotted down that the house they were renting had green shutters. Useless bit of information it turned out, since this was the default trim color on the island. No house can be more than two stories high, and most are white with green shutters and tile roof. Here's their rental property, from a selection of internet photos, built circa 1890, refurbished 2004: 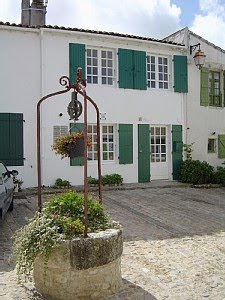 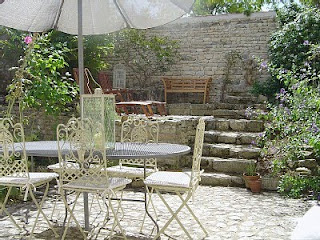 Unfortunately I don't have a photo of the girl who served us at our next stop, a shop in St-Martin stocking only local wines. Michael says he would have bought anything this tousled Saffron Burrows lookalike wanted to sell him.

From there it was on to the beaches, Martray and Phare des Baleines with its wonderful eponymous lighthouse (1854). We only saw the "phare" in the distance; the nearby beach approach was crowded with tacky, velvet-painting-type stalls, so we took ourselves off to a forested area just inland from a shoreline with great ripple patterns, more tafoni pebbles, and German gun emplacements. Michael taught me the word enfilade, for guns positioned at the sides of a group of bunkers, not the front, to maximize their range. One immediately thinks of the beaches of Normandy on June 6, 1944. In fact, several scenes for the 1962 film The Longest Day were filmed on the coasts of Île de Ré, where bunkers like these are a grim reminder of the most recent chapter of the island's military history: 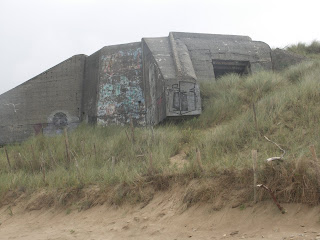 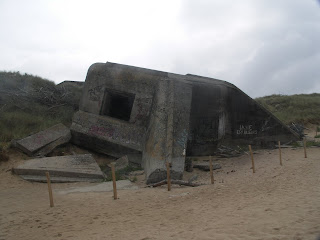 Now for a few less depressingl beach scenes. Île de Ré's salt industry may be in decline, but various types of marine life are still there for the taking, with lots of happy gatherers strolling along the sand, buckets at the ready. A guide posted for novices: 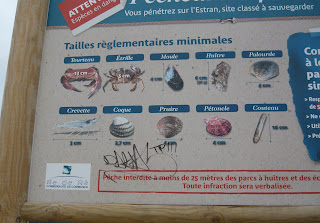 And a professional with a truckload of oysters: 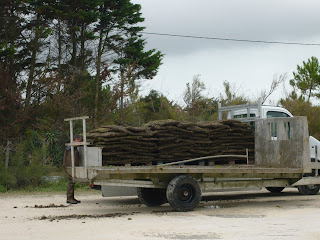 It's almost an art installation, this practical and poignant display of lost shoes: 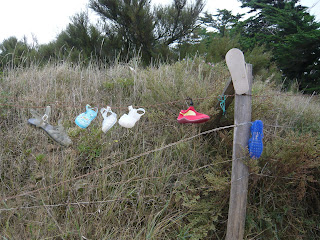 At this stage we start looking at the map plus the Relais & Châteaux and Logis de France guides to decide where we might spend the night. We immediately rule out the conveniently located Château de Mirambeau with its "refined guestrooms" as too OTT and expensive for the likes of us, settling instead on the more modest Hôtel La Citadelle in Blaye, on the Gironde estuary.

This destination involves a bit of a drive, so we hit the village nearest Blaye around 5:30, just in time for what looks to be the French equivalent of a high school parade, complete with cheerleaders flourishing red pompoms. We start to get worried when we find the streets of Blaye thronged with families: will there be room at the inn? No problem. It turns out we've coincided with a weekend "du patrimoine," a sort of heritage celebration with museum open houses and vendors setting up stalls for the occasion; most of the people in the streets are local residents or daytrippers.

Our room is small but adequate. We dump the suitcases and head out for a quick tour of the town while it's still light. Vauban was busy here, too. 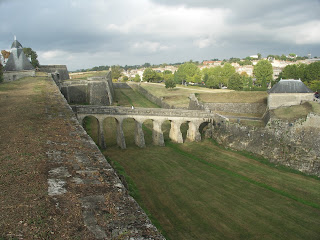 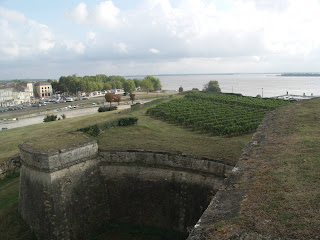 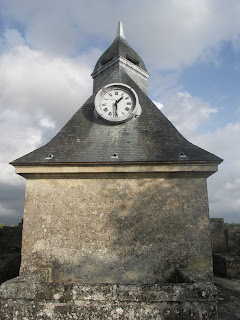 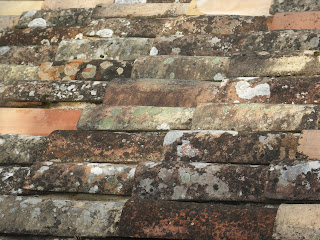 All shops are open late, and we buy a bottle of Côte de Blaye for Michael (this is Bordeaux country; NB vineyard in second photo above) and a black leather and silver bracelet for me (magnet clasp came undone last week, probably at Borough Market—I have bad luck with jewelry**).

Here's Michael at dinner, gazing across the estuary to Médoc while waiting for his oysters to arrive. 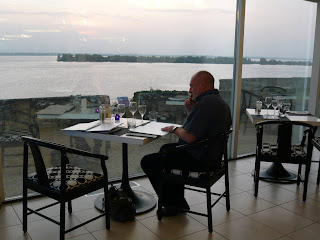 The aesthetic highpoints of the meal—sea bass with pesto on ribbons of carrot, courgette, and leek; chocolate pâté, coconut sorbet, and mango-passion fruit nectar. Unfortunately I neglected to jot down exactly what Michael's dessert, in the last photo, was. Strawberries in a caramelized sauce, with something crunchy and something cold.... He followed this with a small glass of vintage Armagnac, from an impressive stock of bottles we had noticed as we passed the bar on the way into the restaurant. Another fine French meal! 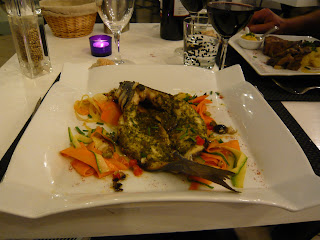 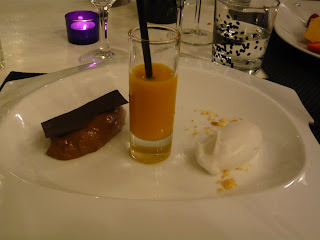 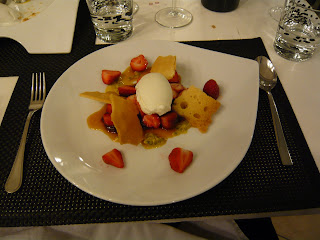 **a miracle: just found bracelet in fridge cheese drawer within an hour of noting the loss here. How lucky is that?
Posted by magpiemom at 9:20 AM