After breakfast I scurry over to a boulangerie we had spotted across the street from the Comfort Hôtel La Marébaudière. It is wonderful! I leave with my single baguette (which turns out to be one of the best loaves we've ever had), wishing we were closer to Laroque des Albères so that I could have loaded up on a few more treats.

This is a sandy day, with stops at Cromenac'h and Grand Lanroué, where I start adding bags of pebbles to the sand filling the trunk of the car. On our way to the latter beach, we pass an old windmill by the salt flats near Guérande and a second, inhabited by someone with a remarkable green thumb and fondness for topiary, in the town of La Tourballe. 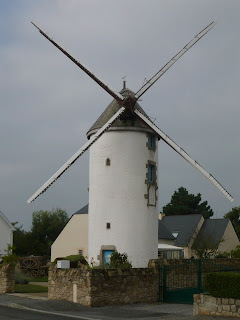 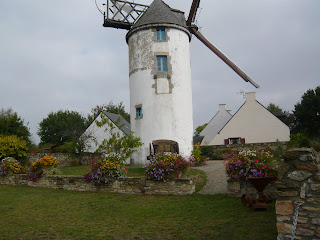 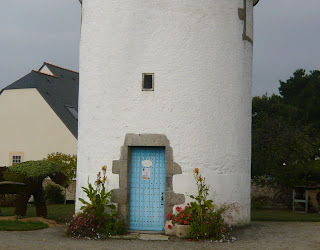 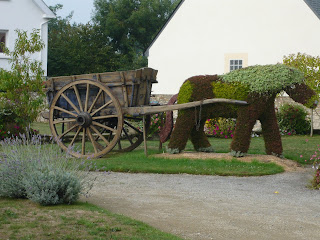 From the whimsical to the grim. We next visit St Nazaire, where the Loire meets the Atlantic and massive submarine pens were built by the Germans in the 1940s. These huge hulks of concrete were so well fortified that they're still a foreboding presence today. Back in London we had been watching a series on Atlantic convoys, so we knew all too well the damage wreaked by Admiral Dönitz and his U-boat crews. What we didn't know about, though, was the 17 June 1940 tragedy of HMS Lancastria off the coast of St Nazaire, the worst maritime loss in British history, suppressed at the time to keep up post-Dunkirk morale: http://compunews.com/gus/lancastria.htm 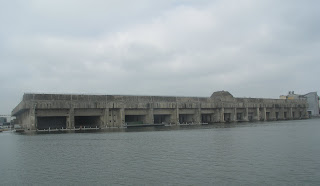 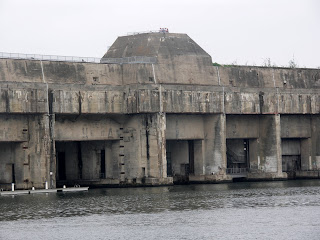 A more uplifting story is the incredible survival of an American airman in January 1943 during Curtis LeMay's Flying Fortress attack on Saint Nazaire (from Wikipedia):
The damaged aircraft included the seventh B-17 flight of Staff Sergeant Alan Magee, from which Luftwaffe fighters shot off a section of the right wing causing the aircraft to enter a deadly spin. Wounded ball turret gunner Magee leapt from the plane without a parachute, losing consciousness due to the altitude. Magee fell over four miles before crashing through the glass roof of the St. Nazaire railway station, which mitigated Magee's impact. Found alive on the floor of the station, Magee was taken prisoner of war and given medical treatment by his captors. He had 28 shrapnel wounds, several broken bones, severe damage to his nose and eye, and lung and kidney damage; and his right arm was nearly severed. Magee was liberated in May 1945 and received the Air Medal for meritorious conduct and the Purple Heart. He was later featured in the Smithsonian Magazine as one of the ten most remarkable survivals of World War II. [Magee lived to be 84.]

Like Liverpool and Bristol, St Nazaire was also a key stop in the slave trade. This memorial in the harbor pays tribute to the 450,000 Africans who passed through on their way to Central America. 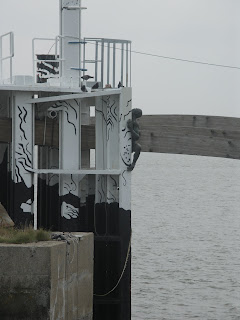 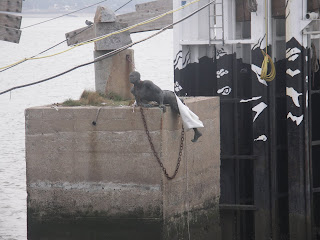 The present isn't exactly swords (or chains) beaten into ploughshares, but shipbuilding, still a key St Nazaire industry, certainly has a more benign aspect these days: 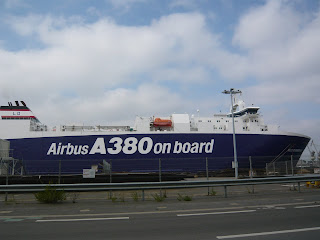 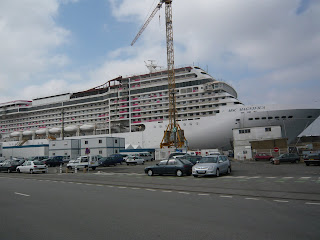 After a picnic at Pornic (once home to the infamous Gilles de Rais, possibly the inspiration for Perrault's Bluebeard, though he murdered children not wives), we continued with our collecting, pebbles for me and garnet-rich sand for Michael at Plage de la Parée in Bretignolles-sur-Mer: 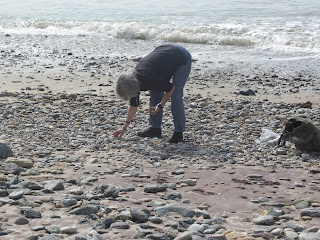 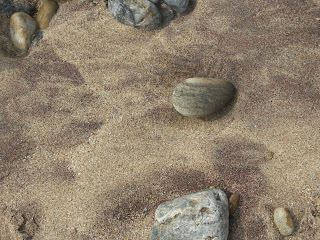 Now that we're south of the Loire, the sun has finally appeared and with it a change in scenery. There are fewer flowers and the tile roofs and stucco of southern France are beginning to replace the slate shingles and building stone of the north. Here on in, as well, butter is no longer served with bread at dinner.

By the time we get to the oceanfront Atlantic Hôtel [sic—not Hôtel Atlantique], storm clouds are again gathering. Michael manages to get these shots from our room window, which is just as well since we're fogged in the next morning. 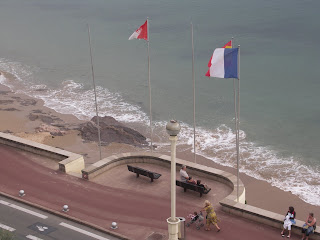 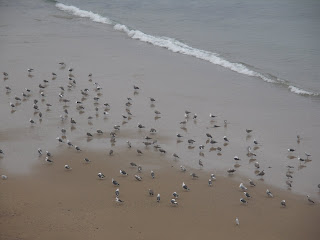 We skip the three-course demi-pension and—such restraint—have the two-course, €26 option. Michael chooses a 2008 Château de Maupas Menetou-Salon. That's excellent, as is Michael's leek and seafood appetizer in a heavenly cream sauce and my dessert, below. Our main courses, both local fish, were pretty damned good, too. 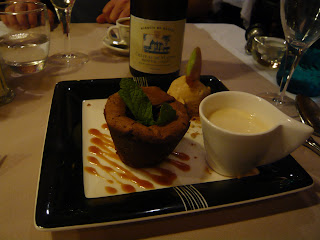 Posted by magpiemom at 9:42 AM