The art of gracious living

Geretha has been telling me about her wonderful classroom assistant Sangeeta for a couple of years now. I e-mailed UK discussions of Slumdog Millionaire--including Salman Rushdie's attack on the film--to be passed on, and Geretha relayed Sangeeta's reactions. So even though Sangeeta and I had never met or even corresponded, I was thrilled when my sister suggested that we all go out to an Indian restaurant for lunch. This plan evolved into an invitation for Geretha, Michael, Kate and me to join Sangeeta and her husband, Anil, for a meal at their house. A delightful prospect, but we clambered into Geretha's car feeling decidedly exploitative that a lunch out had turned into a major effort for our hosts. 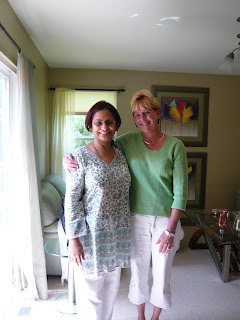 Chris and Brandon were at a baseball game, and Lindsay we dropped off at her boyfriend's house en route (this is a perfect glimpse of Billetz family life--always on the go), before entering one of Lansdale's beautifully manicured developments. Sangeeta and Anil live in what, for me, is the best of all possible worlds. They have an immaculate, spacious three-bedroom townhouse, new enough to be low maintenance, on a corner lot backing onto a creek and forest.

Geretha had advised me to ask to see the album of their gorgeous daughter's wedding in India, the book itself a family heirloom, but unfortunately it was with the bride. After a little begging on our part, Sangeeta and Anil agreed to show us the dvd of this extraordinary multi-day event, a blur of exquisite saris, elephants, dancers, singers, musicians--and a charming, tiny nonagenarian aunt who was coaxed onto the dance floor by her family.The wedding was in Delhi, where guests know how to have a good time, far more so, apparently, than in staid Calcutta. 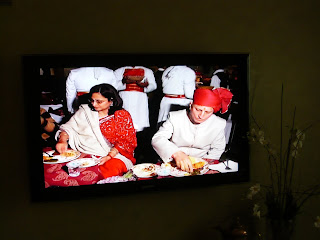 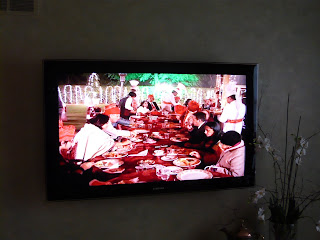 Anil is a retired brigadier, who has now reinvented himself as an IT guru. In India, all the armed forces train together at the same academy, then splitting off into army, navy, air force. This means that his former classmates are now running India's military. The ground-floor den, opening onto the trees behind the house, is filled with some very impressive regimental memorabilia. And--he's the only person I know who was invited to Obama's inauguration (though they were unable to attend). 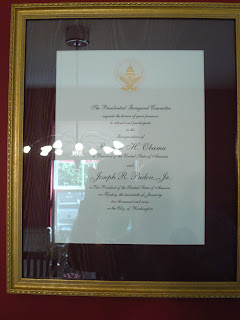 Next we moved to the kitchen, where Sangeeta instructed Geretha and me in the art of making roti. No wonder Geretha raves about her skills in the classroom: we actually succeeded!!! 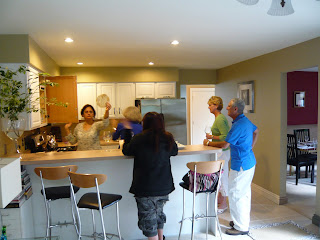 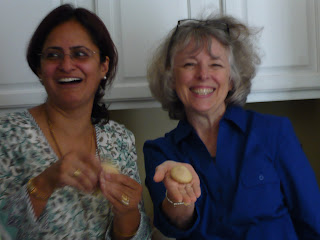 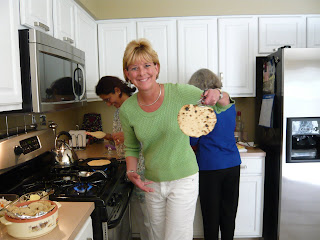 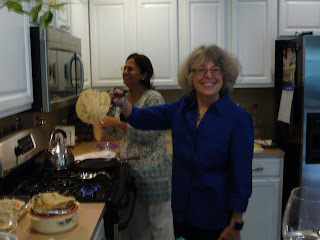 On to the dining room, to enjoy dishes that had obviously taken hours and hours to prepare. We learned the name of a purveyor of excellent chutneys and pickles that we'll have to track down in London: Ashoka (the 3rd century BC emperor whose virtues Michael Wood extolled in the BBC/PBS program "The Story of India"). 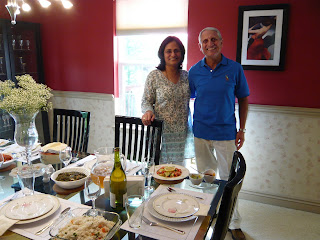 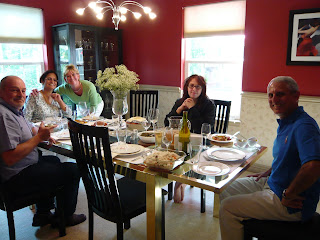 One last photo, taken by Kate, who enjoyed the afternoon every bit as much as we did. She's going to have to convert Robert to Indian cuisine. 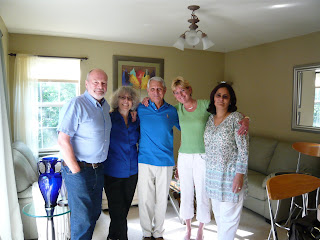 Posted by magpiemom at 4:07 PM