This is a date to remember! Last night we got to meet Robert Lewis Young, the first guy who has succeeded in making our picky, prickly daughter really sit up and take notice. Somehow he managed to still her self-described "bolter" instincts. Having now spent a few hours with him, Michael and I couldn't be happier. We always knew Kate would choose well.

I won't embarrass them by wittering on, but here are a couple of photos of Robert before I change gears to coverage of Kate in Static-X tour mode: 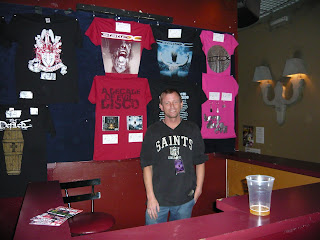 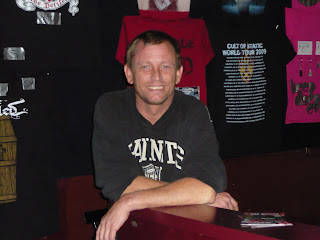 The band were playing at the O2 Academy in Islington. Kate had arranged for the security guard to let us in between 4 & 4:30, so that we could see behind the scenes before the concert. 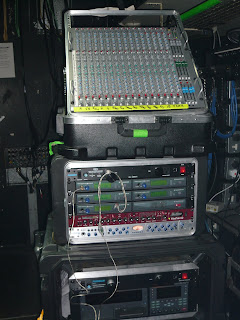 Eric, the guitar tech, who got her the job with Meshuggah: 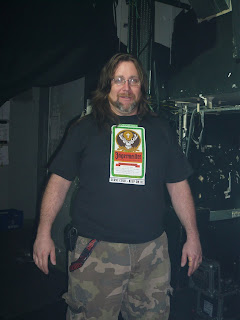 Bruce, the gentle giant who's manager of the band/front of house and originally, via Tony Francisco, brought Kate on board for her first tour with Static-X. He's a Buddhist and a tai chi master, currently giving Kate martial arts lessons. 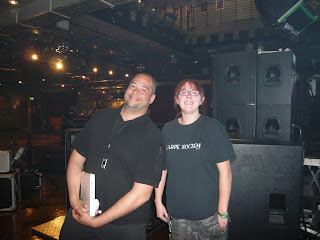 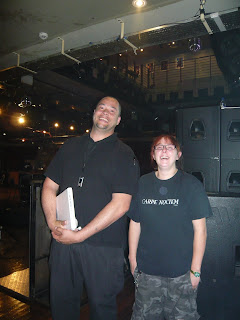 The tour bus--my idea of hell. Discretion being the better part of valor, I declined the opportunity to see the toilet. Kate is dimly visible at the back of the third photo, showing the bunks. 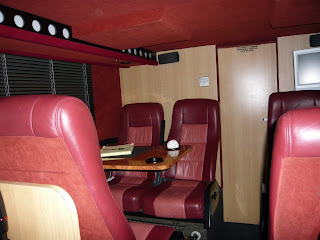 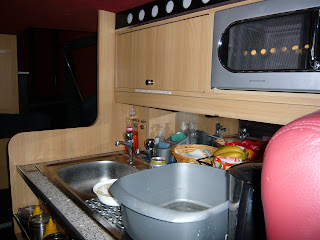 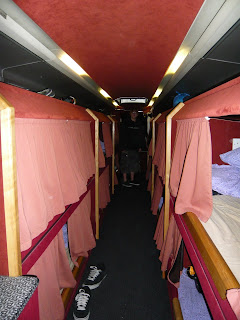 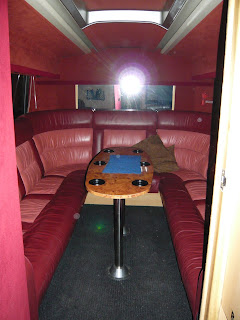 We dragged Robert off for a quick bite at a pub before he had to return at 6 to set out his merchandise. A comedy of errors: first we couldn't find a real pub as opposed to a Slug and Lettuce type franchise; then the food order didn't make it to the chef, so he ended up taking his cheese-topped garlic bread in saran wrap back to the venue with him. Kate and Robert "banter"--their word--on many issues, but food is really the only one where they're seriously at odds. He's a meat-and-potatoes man: dislikes fruit and vegetables; asks that cilantro not be added to the Mexican food that he, a native Californian, loves; doesn't care for Thai or Indian dishes. They laughingly say that if they move in together, they'll have to get separate fridges: "I don't want your yoghurt touching my cupcakes."

Kate had a 7pm deadline. Her search in the interval for another super-cheap watch to replace the one Robert had left on the ferry was in vain. We couldn't even find an expensive one in any of the shops still open. They both know how to squeeze a dollar. While we were in the States, Kate triumphed in the contest to find the cheapest sneakers for the tour. Robert thought he had won when he texted her about his $5 pair. Red flag to a bull: despite my telling her to just concede defeat, she finally hit a second Walmart that had an extraordinary sale. She's wearing her $1 victory shoes in all these photos.

Back to Islington Academy. Kate setting up. N.B. the indispensable gaffer or duct tape in photo 3. 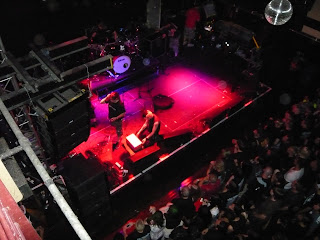 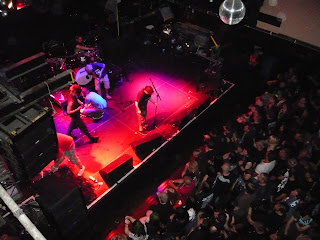 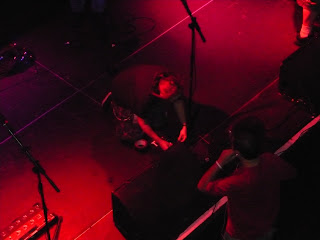 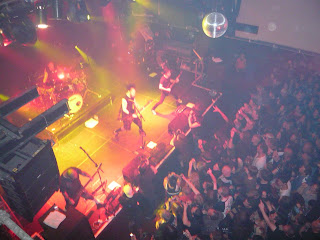 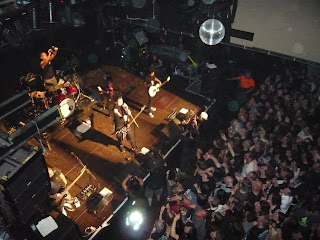 Michael and I--and our eardrums--lasted for four songs. The energy the band generated was quite amazing. The crowd obviously loved what they were hearing, screaming back the lyrics, the slam or mosh pit erupting in what we at first thought were fights, until we saw the participants hugging each other at the end of each song. Cheri says this is called pogo-ing in Germany, so Hans and she may get to make the same anthropological observations when Static-X play in Cologne on 25 June.

Post-gig packing, of Kate's gear onstage and everything at the trailer. For the European tour, there's far less kit than there was on the US one, so this is a bit of a doddle. No Tetris skills needed. 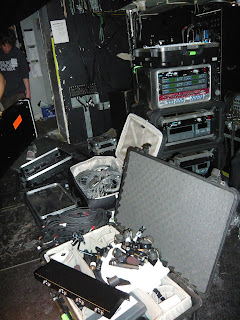 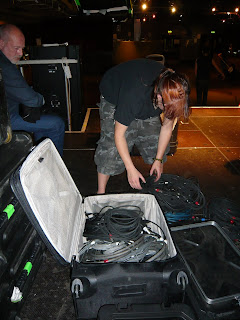 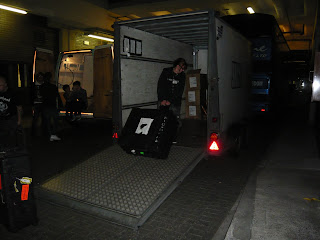 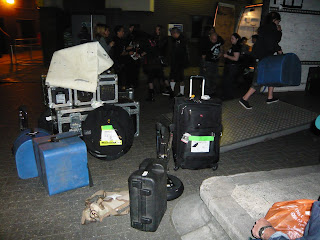 After the show, we took Kate, Robert, and their great buddy Chris, the drum tech, out for a drink at another pub. Chris's beautiful girlfriend, admired in a photo I asked to see, is a high-powered ProTools specialist, who runs her own school in Florida and has more than one platinum record to her name. Will, the amiable and talented drummer Chris has worked with for years, joined us shortly before the midnight witching hour when they all had to be back at the bus. Michael is promised a go at the drums the next time they're in London.

Photos of Chris. I'm hoping that Michael can brighten the first snap so that he's recognizable in the murk. 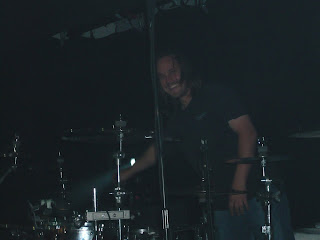 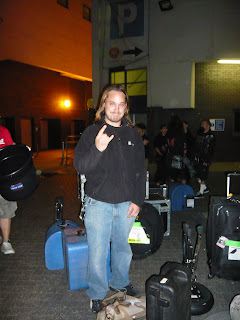 And that was that. I handed over a bag of Sainsbury's purchases to Kate: apples, Cheddar cheese, the best fresh pea soup I've ever eaten, an English cucumber, and a packet of Yorkshire puddings for Robert. The last item won't be great heated in a microwave, but at least he'll get an idea of what she wanted to introduce him to.

For any of the few people reading this who don't know Kate's European tour schedule, I'll end with that. A great adventure! Who knows what will be next???

{Before the date/place info, I'll insert a great comment that arrived from my Canadian friend in Winchester when she read this post: Loved looking at the tour photos – what a strange, fascinating world to be living in – another culture really – sort of like running away and joining the circus a bit. }