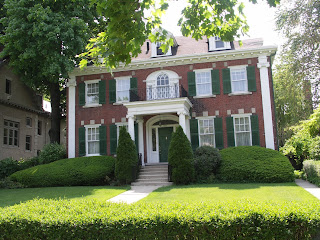 Who says you can't go home again? Michael's engagement to talk about sand at Long Beach Aquarium gave us the opportunity to alight in Detroit en route to California and see our dear old friends Ri (Maria Jane) and Bruce. I hate to think for how many years we've been promising to do this. No time for hand-wringing over procrastination, though. We got there and it was wonderful!

Above is a photo of their lovingly preserved house. Most of the fine homes in this neighborhood were built in the early years of the last century. This is still east Detroit, but driving through the three-street-wide community, goggling at one impressive edifice after another, you can so easily forget that urban poverty and its attendant ills are just around the corner. The billboard Michael saw on the way in from the airport advertising AFFORDABLE BANKRUPTCY seemed a long way away once we were ensconced in the elegant comfort of Ri and Bruce's beautiful home.

Ri, however, would be quite happy to leave this "elegant comfort" behind and move to Grosse Pointe. As she puts it, "I live in Grosse Pointe but sleep here." Maintenance of an aging property like this is expensive and time-consuming. She seems to us as much of a non-stop energy source as ever but, envious though I am of the generous proportions of the property, I wouldn't want to undertake the upkeep--and I'm 61, not in my mid-eighties! It's Bruce who is adamant about staying in what had originally been his wife's family home. I expect that, like my dad, he thinks of all those years of painstaking work the house represents--plus the memories--and hates the thought of abandoning it to strangers. This most gentle of men can display his stubborn English streak on occasion, so stay they do.

Here are some more photos, the first of Ri and Bruce in front of the house, on their way to the wedding of their next-door neighbors' daughter. This was a Jewish ceremony (the neighbors now keep a kosher kitchen, out of respect for their only child's new faith) which, as Ri commented, left her feeling that the couple were "more married than we are." The marriage contract, drawn up by the couple in conjunction with their rabbi, included the statement that their home would be devoted to learning as well as loving. A noble sentiment--I can think of stretches where Michael and I were too distracted by quotidian pressures to keep that uppermost in our minds. Enshrining the principle in your vows might be a very good idea. 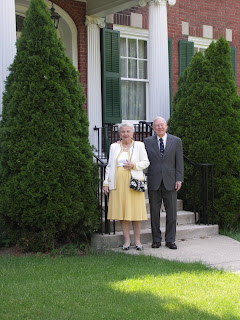 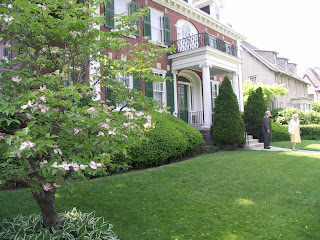 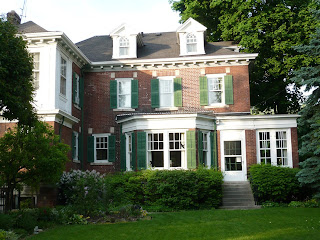 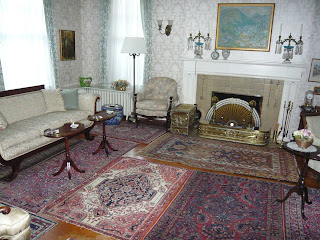 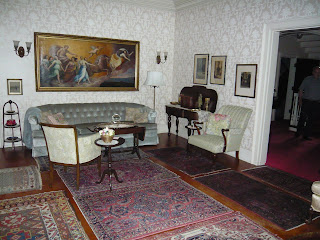 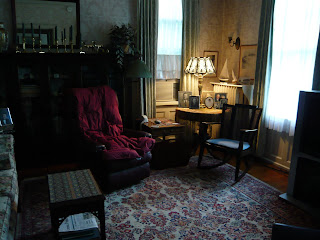 The garden is Ri's province: 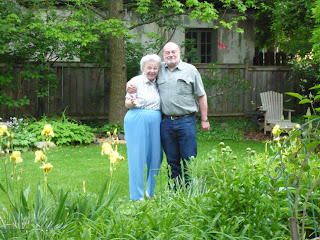 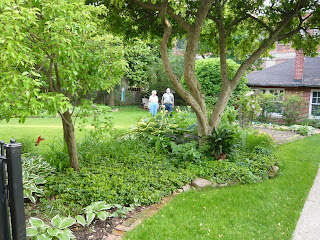 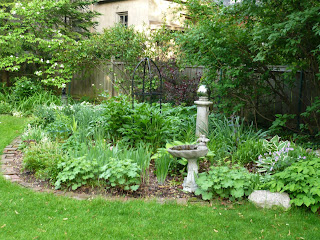 (NB stainless steel gazing ball; the previous mirrored ones gradually deteriorated over the years as the silvered interior wore away. Michael spotted a cardinal perched atop the ball,
but no camera was at hand--Sod's law--for the perfect shot.) 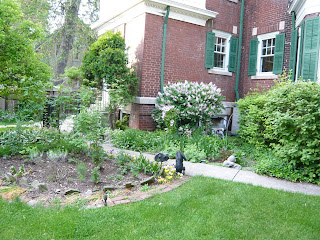 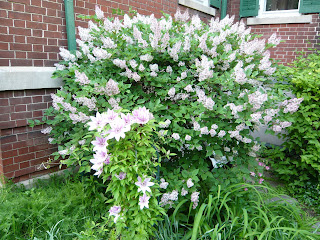 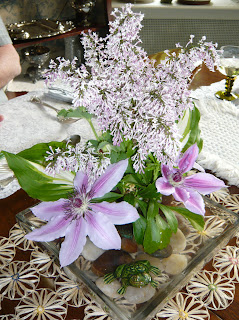 (Blossom from bushes above in one of Ri's distinctive arrangements. Imitation being the sincerest form of flattery, I'm on the lookout now for a simple square vase
like this one--and a ceramic frog.) 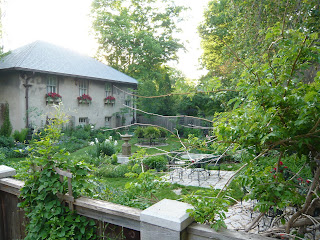 (View into the backyard of neighbors on other side from wedding family; the building you see is the guesthouse at the back of the property that is rented out.)

Ri doesn't just garden, arrange flowers, polish silver, research family genealogy, play bridge (Bruce and she have won their couples tournament for eons), arrange purchases like the incredible OnStar navigation system in their Buick (the reason we rented a more primitive GPS system in California). . . she's also a formidable cook. I returned home with several recipes. As a sampling, here's the chicken pie she served the night we arrived: 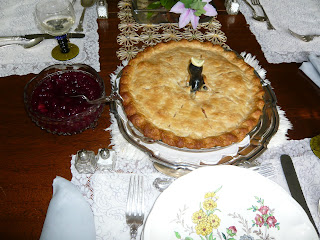 (I was glad to hear that even from-scratch Ri swears
by Pillsbury crust.)

Bruce, Ri and Michael tucking into the gazpacho that preceded the pie, which in turn was followed by a coffee ice cream and Heath bar frozen dessert (I should also have recorded the omelettes-in-a-bag we had for breakfast the next morning): 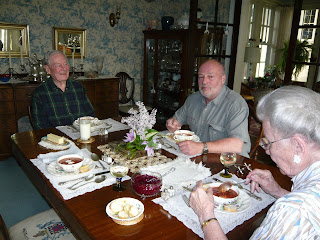 Another of Ri's projects was finally having the top to her ancestral bed brought up from the basement and restored to its former glory. Ri's family was from the southern US and, during the Civil War, they hid their silver in the top to protect it from marauding Yankees. Even in this high-ceilinged bedroom, the bed just barely fits. 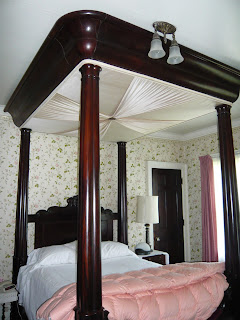 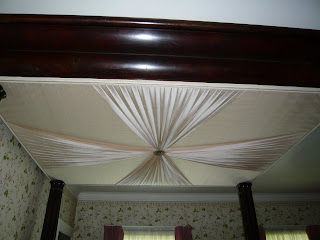 Although Ri is a forthright, straight-speaking geologist, her southern roots certainly show in her hospitality. We couldn't have had more gracious hosts. And speaking of "loving and learning"--we came away enriched in so many ways from this visit. I'm not even referring to my salvation-in-the-Mojave straw hat, the framed picture agate, the sodalite and tourmaline/quartz eggs. . . . I'm thinking of the way conversation flowed around and through so many topics, whether we were chatting over dinner, playing Chronology, filling in crossword blanks. Thank you, Bruce and Ri, for those wonderful, memorable two days.
Posted by magpiemom at 11:31 AM