After Denis and Alam (filmmakers producing a documentary for Arte on sand) left on Sunday, we headed out with Connie and Mark to Ciputat Raya, the road we used to take with the kids to ISCI. I had seen an ad in Jakarta Expat, a free paper available at places like Kem Chicks, for a 50% off sale at Dharma Mulia, a gallery specializing in Indonesian antiques of all sorts. I emailed Irwan Holmes, the owner, that I was especially interested in old beads and textiles. He kindly arranged a display of these in his office, but by the time we had wended our way through the labyrinth of rooms, we had already chosen purchases that maxed out Michael's one-day spending tolerance.

Ciputat Raya No. 50 is crammed with museum-quality pieces. In fact, I think I'll be taking all friends and family who manage to make the trip to Jakarta out to view Dharma Mulia. Are the prices the best around, once the 50% has been taken off? Damned if I know, but I did come away feeling confident that Irwan Holmes, a 60-something New Yorker who ended up in Jakarta by way of UCLA, isn't selling me something made out back when he claims it's an antique. And the gallery definitely has things we haven't seen anywhere else.

We're very limited by size as well as price, so most of these curiosities were ogled rather than seriously considered. 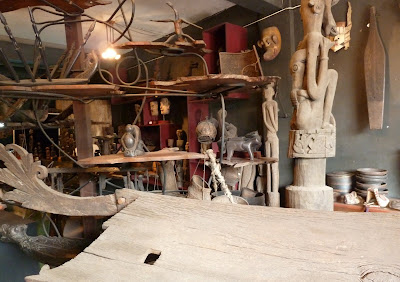 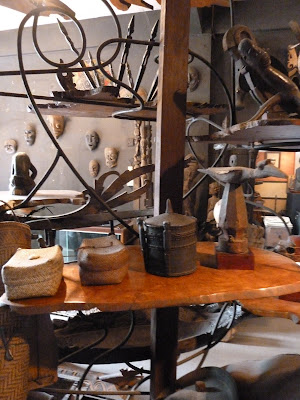 Could only be from Bali. 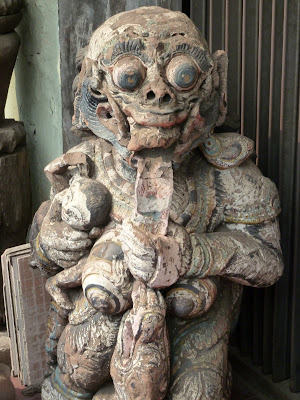 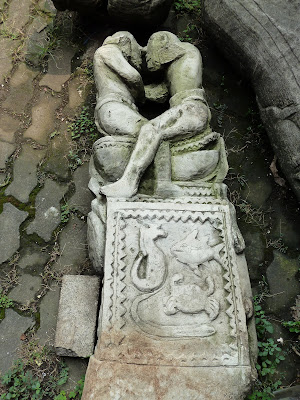 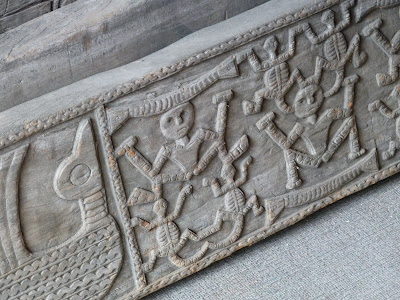 Between the lizards carved in this stone is a mamuli fertility symbol, more often seen in gold and silver jewelry from Sumba. Far too big, unfortunately, to take home with us — no price tag, but without a doubt also far too expensive. 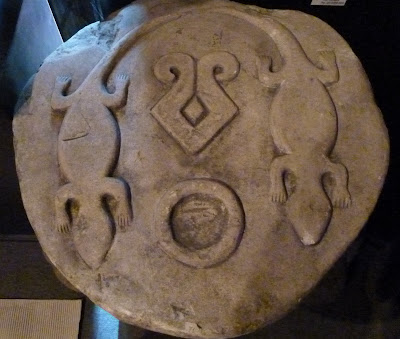 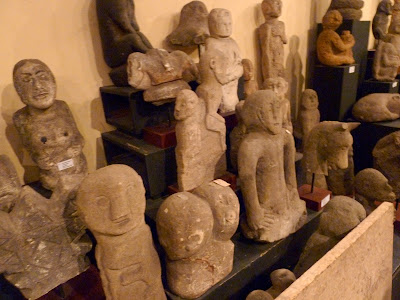 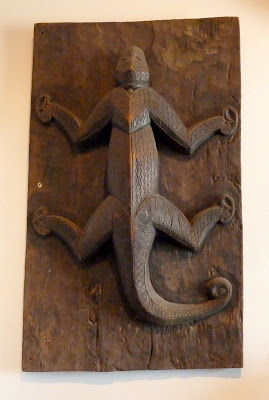 We were quite taken by these Majapahit (1293-1500 CE) piggy banks. Note the turtle at left in second photo. In June there was an article in the Jakarta Expat about the Javanese origin of terracotta piggy banks, unsurprisingly not the only theory on offer ("parallel evolution," as Wikipedia puts it). They do date from the 14th century, however, and are found in abundance on digs. They actually depict celeng (wild boar), still to be found in the ever-diminishing jungles of the archipelago. Pigs are said to be associated with prosperity because of their impressive reproductive powers. One explanation anyway. 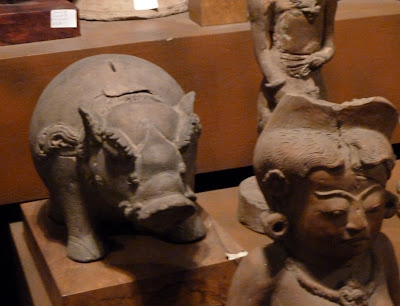 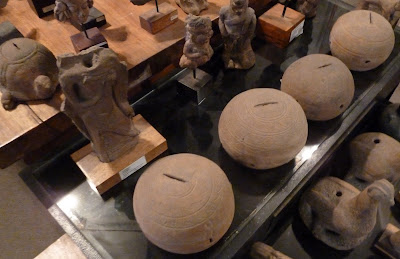 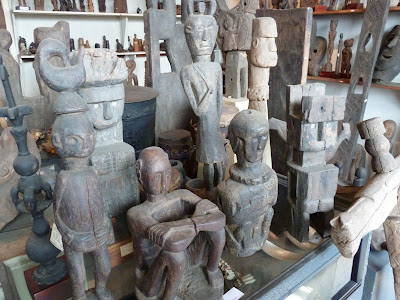 Since we're more interested than ever in textiles (so beautiful, so transportable), we suddenly realized when we saw them on display that some antique spinning and weaving tools would be a nice addition to our collection.


One of several cotton engines, or "gins," which we didn't buy. Our purchases at end of post. 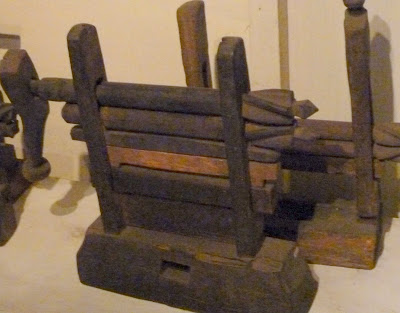 Pak Irwan explaining some items in his weaving tools collection. The wooden block on glass cabinet between us is what I think (post googling) is a skeinwinder. 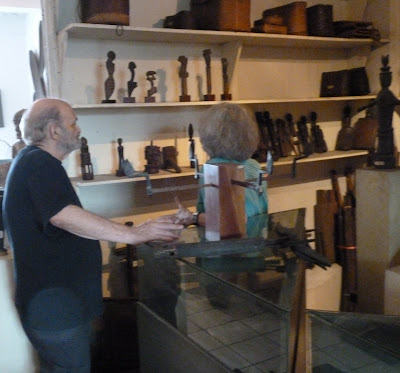 Cover photo from brochure of one of Dharma Mulia's many exhibitions. Closing-out sales have been a feature of the gallery since Pak Irwan decided to concentrate on his first love, jewelry-making. 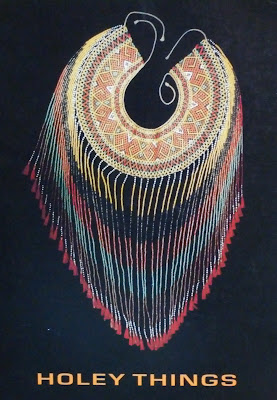 The necklace he designed that was presented to Michelle Obama. 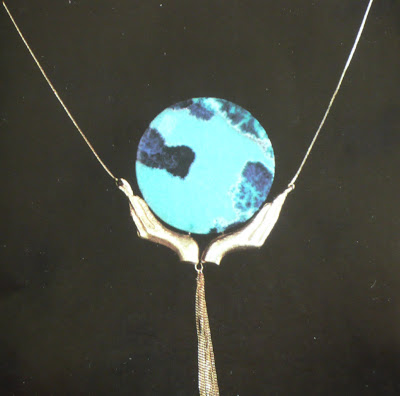 Another of his designs. 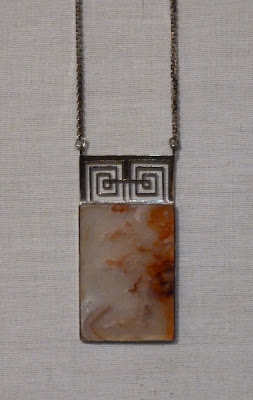 Blue amber. Before the discovery of a lode in Sumatra, this was pretty well exclusive to the Dominican Republic and Mexico. Michael would have liked the piece in the rough Pak Irwan is holding in the second photo below, but not for $800. Dharma Mulia will be auctioning jewelry made from this at Bonhams. 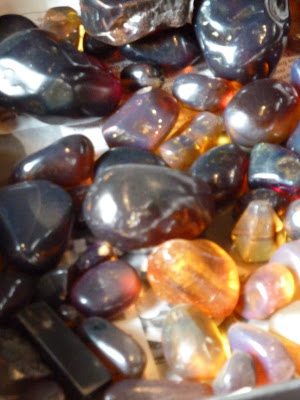 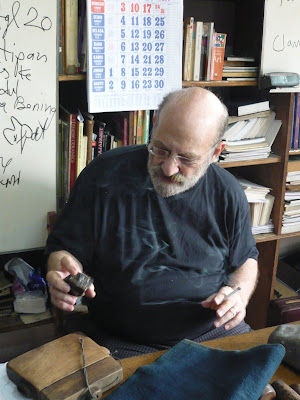 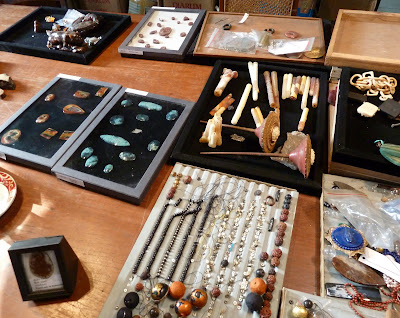 What the Wellands bought.
Old weaving/spinning implements. The bamboo cylinder has four holes for the rods that would turn it into a skeinwinder. Perhaps next time I'll get a set of those. 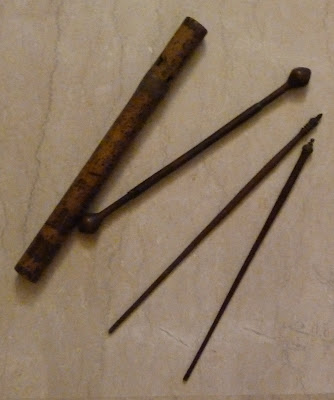 Antique wooden "purse" for gold, Sumba. There should be a blue bead on the cord. Despite all the colors glass beads come in, the Sumbanese apparently always choose a shade of blue. 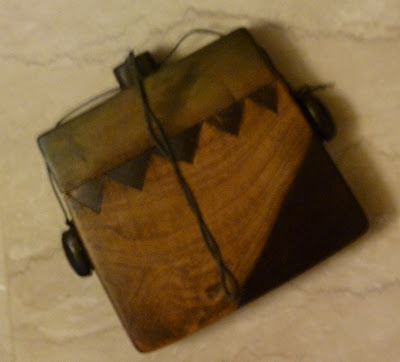 Tempat kapur (place for lime) from Timor. This, like the modern variety we bought for a fraction of the price on Jalan Surabaya, holds the lime powder that is an essential part of the betel nut chewing process. 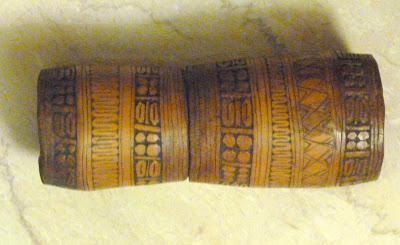 Our prized acquisition: a Javanese "wooden pillow." When we took Iain and Kate to Yogyakarta at ages nine and seven, we saw guards at the sultan's palace snoozing on these. 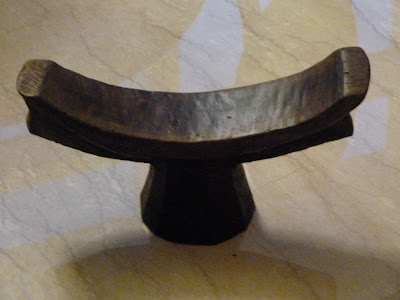 Posted by magpiemom at 3:09 AM