Last week Dameria and I had the first of what I hope will be monthly get-togethers. We initially met at the textile exhibition and, when she came to our apartment, her scarf and dress again clearly belonged to someone who loves color and pattern. 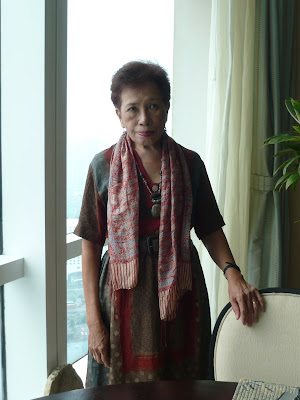 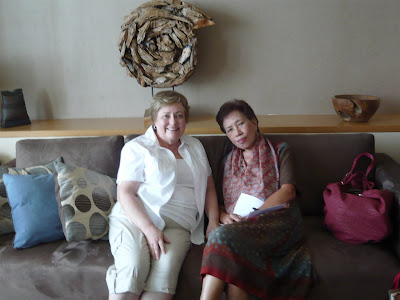 Lunch at Canteen, in Pacific Place. I had wanted to take Dameria to TeSate, but she said western food is more of a treat for her. The drinks, however, were delicious local fruit smoothies. 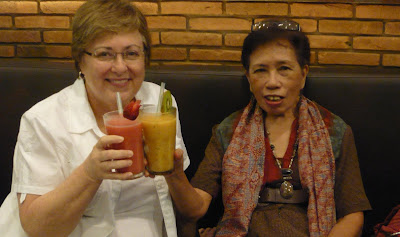 Dameria's dessert, perhaps the best part of the meal. Just as well, since she had to wait about twenty-five minutes for it to arrive. The cake tower on the right is filled with molten chocolate. 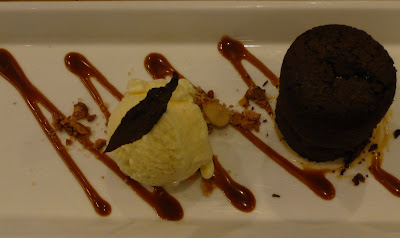 I had asked Dameria to bring some family photos. Being an outgoing Batak, she kindly agreed. After a little googling to check details here, I realize I should have asked which Batak subgroup she belongs to. I know enough to associate Bataks with Sumatra, Christianity, and music, but that is it.
Dameria dancing in Batak costume, when she was teaching in Vancouver 1994-96. 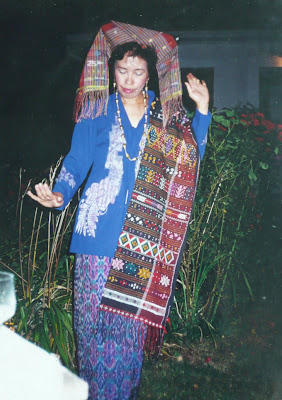 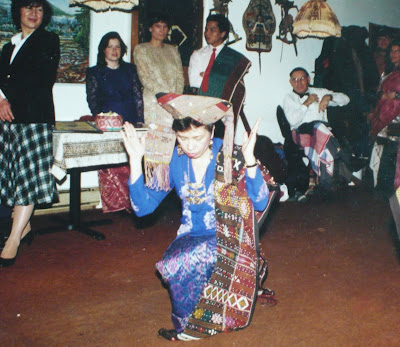 Dameria is the third of ten children. Her two older brothers are now dead, but six sisters and one brother are still alive. Here are the Nainggolan sisters circa 2007, in age order. Left to right: Dameria (who asked her father once why she had the only Batak name; she felt it was a nama pasaran (marketplace name), Frieda, Lydia, Miryam, Rebecca, Marusya, Estherina. Marusya is one of Indonesia's leading composers (see here and here); Rina, the youngest, lives in Santa Rosa, California. 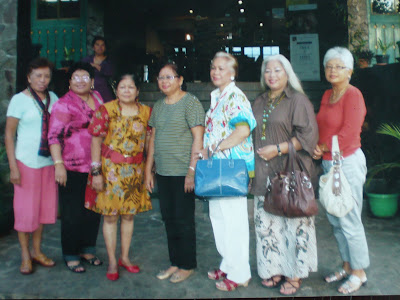 Moving back in time . . . Dameria and her brothers. Both her parents were teachers (her mother spoke Batak, Indonesian, Dutch, English, and German; her father studied in the Netherlands and Melbourne, Australia). Dameria was born in Surabaya during World War II. Her family then moved to Malang, which the Japanese were also occupying. Her mother had a scar under one eye from where she was kicked by a soldier in the Imperial Army. 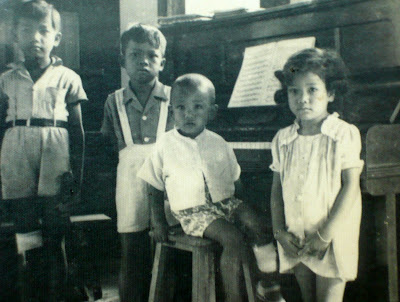 After the war, Bogor, outside Jakarta, became the family home. Dameria is at the top left and her mother is standing next to her. 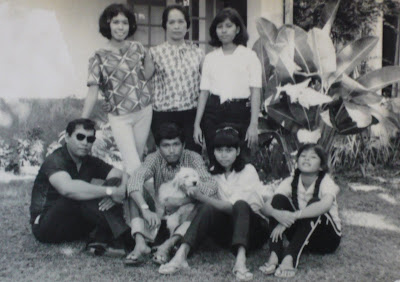 Dameria is in the middle and Marusya, hair unmistakable, on the right. This photo is so like one taken of Cheri and me with our cousins Wendy and Johni in the late 1960s. 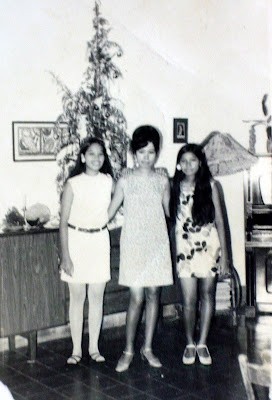 I'm going to start a list here of things I learn from Dameria. It's wonderful to have another Indonesian friend, like Vidya, who speaks English with a fluency that I will never, ever have in a foreign language.
Facts:
The Ambonese were known as Belanda Hitam (Black Dutch). A bit more on this from Wikipedia: "During the era of the VOC [Dutch East India Company], the Moluccans were not only forced to trade with the VOC only, but also to focus solely on the production of cloves. After the downfall of the VOC and the collapse of the trade in cloves, they were fully dependent on the colonial structure and found occupation in the colonial army. The Ambonese were regarded as fierce fighters, reliable soldiers and absolutely loyal to the Dutch Crown. It was precisely this reputation that made them unpopular with other Indonesian nationalities. The Malay nickname for them was Belanda Hitam, which translates to “Black Dutch” in English. All of this put them in a difficult position during both the Japanese occupation and the Indonesian national revolution."
Vocabulary:
pelit — tight-fisted
Posted by magpiemom at 5:46 AM