A few other edibles we managed to consume over the last few days.

Christmas & Boxing Days saw us quaffing fresh-squeezed OJ & bubbly and scoffing German pancake, really a Yorkshire pudding served with citrus juice and icing sugar. I'll include the Colorado Cache recipe at the end of this post. Also featured was crispy Oscar Mayer bacon, c/o the Tramuntana supermarket we stopped at in La Jonquera on our way to Laroque from Girona airport. 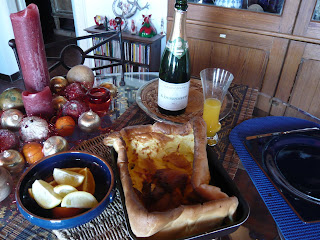 On Boxing Day afternoon (leftovers today), we got out the Feuerzangenbowle Cheri and Hans-Jörg gave us years ago. Photo shows Michael pouring flaming rum — would have shown up better at night — over a sugar cone into a mixture of heated red wine, fresh orange juice, and cinnamon. With this we indulged in two versions of Myrna's soused Camembert, a Brillat Savarin and a Chaource, both baked with white wine. 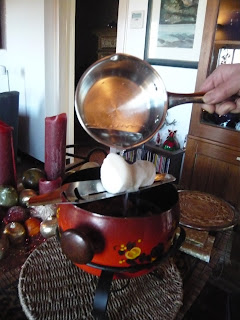 We had many good wines over the holidays, but perhaps the best was this bottle we purchased on a visit to the Haut Gléon winery about ten years ago. One more still resides in Michael's cave — you'll have to get out here, Kate, before it disappears. Some of the older wines have, disappointingly, already passed their peaks. 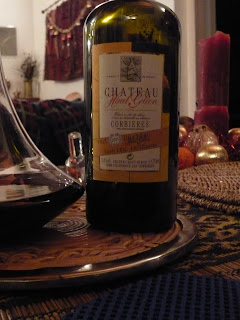 Here's something past its peak that we didn't actually consume, despite my generally cavalier attitude to expiration dates. I had roasted beetroot to make borscht with red cabbage and red onion. However . . . we were keeping surplus food that wouldn't fit in the fridge on our balcony. I kept delaying soup production, with the result that a splendid mold colony appeared, converting the beets to dominoes. 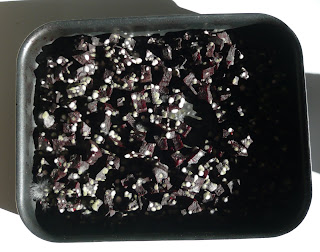 Note the spiky growth and the solitary red dot in lower left corner. I'm sure Alexander Fleming could have done something significant with this. 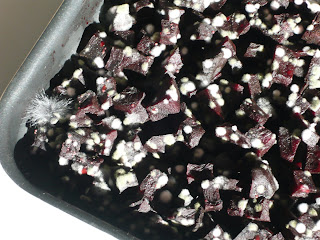 Now, the incredibly easy recipe for German pancakes — about as German as English muffins are English. To make it even easier, I simply melt all the butter in the baking pan and pour the requisite amount into the batter. Forget melted butter when serving: orange & lemon sections and powdered sugar are all you need.