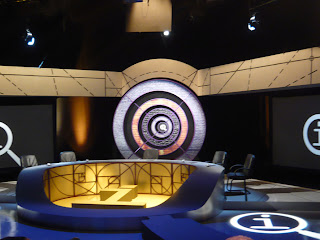 Last night Michael and I were lucky enough to be in the audience for the taping of Stephen Fry's TV show QI: quite like being a fly on the wall for a dinner party (minus the food, of course) where the host and the four guests are all witty and erudite. We laughed a lot and learned a lot.

Fry happened to comment on the fact that when sea sponges are pulverized in a blender they recombine into the original organisms. If five types of sponges are dropped into the blades, there will be five new sponges after they're left a while with space to regroup.

I had to google this when I got home and came across, fittingly by chance, a terrific article by David R. Colman, the director of the Montreal Neurological Institute, on serendipity in medical research.

Now I vaguely knew the etymology of the word, but it's the definition that Colman concluded with, quoting the biomedical researcher and teacher Julius Comroe, that was very much in the QI spirit.

First, here's Simon Singh (whose recent triumph in the absurd libel case brought by British chiropractors is a cause for celebration) on the background to serendipity's appearance in the English language. [He led his piece with Comroe's definition, but I'm saving that for the end.]

Serendipity (noun) ; a natural gift for making useful discoveries quite by accident.

The word has its roots in "The Three Princes of Serendip", a Persian story about three princes who had the knack of discovering things quite by chance.

"The Three Princes of Serendip" was published in Europe in 1557 by a Venetian, Michele Tramezzino, and eventually was translated into other languages. The British statesman Horace Walpole read the story as a child, and later coined the word serendipity in a letter dated January 28, 1754, sent to Horace Mann (envoy to Florence). Walpole wrote about learning some news quite by chance, and stated that "this discovery, indeed, is almost of that kind which I call Serendipity, a very expressive word."

He explained that this name was part of the title of a "silly fairy tale, called The Three Princes of Serendip; as their highnesses travelled, they were always making discoveries, by accidents and sagacity, of things which they were not in quest of..."

And, at last, here's the clever, clever definition that inspired this post:

In the end, though, probably the best way to sum up the phenomenon was most thoughtfully stated by Julius Comroe:

“Serendipity is jumping into a haystack to search for a needle, and coming up with the farmer’s daughter.”

Comroe must have been an amazing man. Below is a link to a tribute written after his death in 1984. I was particularly impressed by how losing an eye to an infection picked up while performing surgery as an intern at the Hospital of the University of Pennsylvania precipitated a change of career that so benefited medical science.