I've loved Alison Lurie novels in the past and now I love this article. I finished reading it about two minutes ago and rushed to the computer to post it. Tomorrow I'll paste in the Jenny Joseph poem she mentions.

Paola--this one's for you!! You just need to wait a decade or so to come of age.

The day I threw away fashion

When she hit 60 Alison Lurie realised that fashion no longer spoke to her. So she got rid of half her wardrobe, stopped colouring her hair, gave up wearing makeup - and felt euphoric 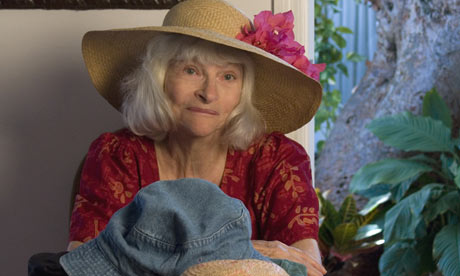 Alison Lurie sits in her Key West, Florida house in a straw hat she embellished with bougainvillea from her garden. Photograph: Phyllis Rose

Soon after I reached 60 I was abandoned by Vogue magazine and all its clones. Like former lovers who drop you slowly and politely because they once cared for you, they gradually stopped speaking to me. Without intending it I had permanently alienated them, simply by becoming old. From their point of view, I was now a hopeless case. They were not going to show me any more pictures of clothes I might look good in, or give me useful advice about makeup or hair.

At first my feelings were hurt. Hadn't I loved fashion and been faithful to her all these years? Just as one avoids the songs that recall a lost lover, I stopped reading her magazines, even in a doctor's office. As a result, I felt first panic and then a rush of euphoria. I was abandoned and alone, yes, but I was also free: after more than 60 years, nobody was telling me what to wear.

Since fashion no longer pursued and flattered and scolded me, I realised that I did not have to pursue her. I could go through my closet and get rid of all the stylish clothes I really didn't like: the fitted jackets, the cropped pants that left six inches of pale stubbled leg hanging out, the silk dress-for-success blouses with floppy bows and padded shoulders. I also gave away everything too obviously "sexy" - that is, shiny and low-cut and tight and uncomfortable. I hadn't worn these outfits for years, essentially because I didn't want to look as if I were hopelessly trying to inflame passion in members of the opposite sex.

What was even better was that I could revive clothes I had loved in the past and hadn't been able to bear to throw away, though they had become completely out of date. The long patchwork hippie skirts and vests, the filmy scarves and big soft shawls, the loose cowl-neck sweaters, the floppy straw hats, some with feathers or artificial flowers. Some of these things were so far out of date that they looked new, and if they didn't, I didn't care.

Next I got rid of all my high-heeled shoes. I hadn't worn them very often since I slipped on an outdoor stairway covered with wet leaves and broke my leg. I had already understood that if I had been wearing flat shoes that day I would have avoided a miserable week in the hospital and three months on crutches. Some of these shoes were beautiful in themselves, and giving them away was hard. But it was also a relief, because although fashion magazines don't admit it, high heels always slow you down and hurt your feet. Whenever you are in a restaurant you can see that under the partial cover of the tablecloths at least half the women have taken off their painful spike-heeled pumps and sandals, just as my friends and I used to do. Fashion pretends to be a feminist, but still makes it almost impossible for anyone under her spell to negotiate a subway grating or a rough gravel path, or run for a bus without turning her ankle.

After a while, since fashion was no longer nagging me to colour my hair, I stopped, and in a few weeks it was almost white. This led to a wonderful discovery. For more than 60 years I had been a brownish blonde, first naturally and then artificially, and half the spectrum had been out of bounds. Yellow and orange and coral and pink made my hair seem dirty as well as dirty-blonde; purple and lavender made me look like a basket full of dried straw. Now all this was over. White and grey hair go with every colour, including white and grey. It is no coincidence that some feminists have adopted as a slogan the first line of a poem by Jenny Joseph: "When I am an old woman I shall wear purple."

Already I had saved the two hours a month I had spent trying to turn my hair into a dull imitation of its original colour and then cleaning up the mess in the sink afterwards. Next, with my husband's encouragement, I saved more time by throwing away my makeup. Powder and foundation and eye shadow tend to cake in wrinkles, and an ageing woman with bright-red lipstick, especially when it has leaked into the little, otherwise invisible lines around her lips, can look like an elderly vampire, or worse. She can become the sort of terrifying figure that the Ancient Mariner saw on the death-ship:

Her lips were red, her looks were free,
Her locks were yellow as gold ...
The Night-mare LIFE-IN-DEATH was she,
Who thicks man's blood with cold.

My friends made similar changes, all individual and all in defiance of fashion. One gave away all her skirts and went into trousers and jeans; another disobeyed the rule that dresses are now for formal occasions only and began sewing herself loose-cut casual smocks and muumuus in an unfashionable mid-calf length: she is a serious gardener, and points out that it is much easier to wash your knees than to wash a pair of slacks. Another friend decided that she would simplify her basic wardrobe to basic black, with accents of purple or green or scarlet.

All of us realised with joy that we could now wear the clothes we liked best. There was only one rule: we had to be reasonably neat. It may be true that "A sweet disorder in the dress/Kindles in clothes a wantonness" but in old age what it kindles is the suspicion that you are starting to lose your mind. Spiky, confused-looking hair of the sort that goes to fashionable clubs, ragged hems, and unravelling sweaters no longer look charming.

Realising this, even the most charmingly untidy of my friends have now reformed. We do still see some unfortunate contemporaries who haven't learned this rule - and also, alas, some who are still worshipping at the altar of Fashion, who has for ever turned her back on them.

Posted by magpiemom at 5:04 PM