A nation of jailbirds

Far too many Americans are behind bars 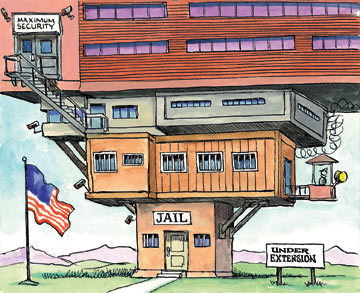 THE world’s tallest building is now in Dubai rather than New York. Its largest shopping mall is in Beijing, and its biggest Ferris wheel in Singapore. Once-mighty General Motors is suspended in a limbo between bail-out and bankruptcy; and the “war on terror” has demonstrated the limits of American military might.

But in one area America is going from strength to strength—the incarceration of its population. America has less than 5% of the world’s people but almost 25% of its prisoners. It imprisons 756 people per 100,000 residents, a rate nearly five times the world average. About one in every 31 adults is either in prison or on parole. Black men have a one-in-three chance of being imprisoned at some point in their lives. “A Leviathan unmatched in human history”, is how Glenn Loury, professor of social studies at Brown University, characterises America’s prison system.

Conditions in the Leviathan’s belly can be brutal. More than 20% of inmates report that they have been sexually assaulted by guards or fellow inmates. Federal prisons are operating at more than 130% of capacity. A sixth of prisoners suffer from mental illness of one sort or another. There are four times as many mentally ill people in prison as in mental hospitals.

As well as being brutal, prisons are ineffective. They may keep offenders off the streets, but they fail to discourage them from offending. Two-thirds of ex-prisoners are re-arrested within three years of being released. The punishment extends to prisoners’ families, too. America’s 1.7m “prison orphans” are six times more likely than their peers to end up in prison themselves. The punishment also sometimes continues after prisoners are released. America is one of only a handful of countries that bar prisoners from voting, and in some states that ban is lifelong: 2% of American adults and 14% of black men are disfranchised because of criminal convictions.

It is possible to pick holes in these figures. Some of the world’s most repressive regimes do not own up to their addiction to imprisonment (does anyone really believe that Cuba imprisons only five in every 1,000 of its citizens?). No sane person would rather be locked up in Russia or China than in America. A country as large and diverse as America boasts plenty of model prisons and exemplary training programmes. But all that said, the conclusion remains stark: America’s incarceration habit is a disgrace, wasting resources at home and damaging the country abroad.

Few mainstream politicians have had the courage to denounce any of this. People who embrace prison reform usually end up in the political graveyard. There is no organised lobby for prison reform. The press ignores the subject. And those who have first-hand experience of the system’s failures—prisoners and ex-prisoners—may have no right to vote.

Which makes Jim Webb all the more remarkable. Mr Webb is far from being a lion of the Senate, roaring from the comfort of a safe seat. He is a first-term senator for Virginia who barely squeaked into Congress. The state he represents also has a long history of being tough on crime: Virginia abolished parole in 1994 and is second only to Texas in the number of people it executes.

But Mr Webb is now America’s leading advocate of prison reform. He has co-sponsored a bill to create a blue-ribbon commission to report on America’s prisons. And he has spoken out in every possible venue, from the Senate to local political meetings. Mr Webb is not content with incremental reform. He is willing to tackle what he calls “the elephant in the bedroom”—America’s willingness to imprison people for drug offences.

Does Mr Webb have any chance of diminishing America’s addiction to incarceration? History is hardly on his side. For most of the 20th century America imprisoned roughly the same proportion of its population as many other countries—a hundred people for every 100,000 citizens. But while other countries stayed where they were, the American incarceration rate then took off—to 313 per 100,000 in 1985 and 648 in 1997.

Mr Webb also has some powerful forces ranged against him. The prison-industrial complex (which includes private prisons as well as public ones) employs thousands of people and armies of lobbyists. Twenty-six states plus the federal government have passed “three strikes and you’re out” laws which put repeat offenders in prison for life without parole. And the war on drugs has pushed the incarceration business into overdrive. The number of people serving time for drugs has increased from 41,000 in 1980 to 500,000 today, or 55% of the population of federal prisons and 21% of those in state prisons. An astonishing three-quarters of prisoners locked up on drug-related charges are black.

Up for a fight

But Mr Webb is no ordinary politician. He packed several distinguished careers into his life before becoming a senator—as a marine in Vietnam, a lawyer, a much-published author and secretary of the navy in the Reagan administration. And he is not a man to back down from a fight: one of his best books, “Born Fighting: How the Scots-Irish Shaped America”, celebrates the martial virtues of the clan to which he is proud to belong.

Some signs suggest that the tide is turning in Mr Webb’s direction. Congress passed the Prison Rape Elimination Act in 2003. Barack Obama’s Justice Department has hinted that it wants to do something about the disparity in sentencing between blacks and whites for drug crimes. Support for both the death penalty and the war on drugs is softening: a dozen states have legalised the use of marijuana for medical purposes. If Mr Webb can transform these glimmers of discontent with America’s prison-industrial complex into a fully fledged reform movement, then he will go down in history as a great senator.

Posted by magpiemom at 4:41 PM