Perhaps I should have done a little more research before choosing my moniker.

Whatever. Here's the rhyme referred to in the title of the article below:

In the spring, large numbers of Magpies often gather to resolve territorial conflicts and social standing. These gatherings, called parliaments, probably gave rise to the many nursery rhymes and poems about Magpies, such as:

One for sorrow, two for mirth,
Three for a wedding, four for a birth,
Five for silver, six for gold,
Seven for a secret not to be told.
Eight for heaven, nine for hell,
And ten for the devil's own sel'.

One for sorrow, two for joy;
Three for a girl, four for a boy;
Five for silver, six for gold;
Seven for a secret, never to be told;
Eight for a wish, nine for a kiss;
Ten for a bird that's best to miss.

And from today's Guardian G2 section:

One for sorrow, two for joy ... why we must protect magpies 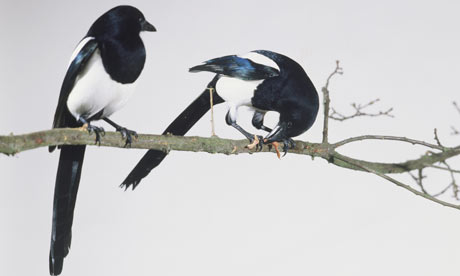 If you see a single magpie this week, consider yourself the lucky one. Because the Songbird Survival Trust has called all bird lovers to arms. They want a magpie cull and they are not just asking farmers or gamekeepers to lock and load; they want everyone with a garden to use their legal right to kill these birds now, in their breeding season, leaving their chicks to starve in the nest. Well, as a lifelong and passionate birder, I'm not going to be signing up for the slaughter.

The trust's reasoning comes down to the same old misinformed chestnut - that evil magpies are causing the decline in smaller songbirds. It's kneejerk ornithological racism, ignorant and counterproductive. It's true that some magpies prey on the nests of smaller birds during the breeding season, but this is for perhaps three or four months of the year and only affects young birds that are easily replaced. The magpies never kill the more valuable breeding adults (unlike cats, which do so 365 days a year). No predator would thrive by dramatically reducing its own food supply; indeed, in areas where there are more magpies, there are typically more smaller species too. So how could the trust get it so wrong? I can only assume that this fringe group is still clinging to outdated views built on a foundation of medieval superstition.

Magpies have long been Britain's most hated bird. They are big, brightly marked and bark like Bren guns. Despite their brash appearance, they are a native species, but an in-your-face one, with a wealth of folklore to subconsciously seed such hateful reactions. Many people still tip their hats to a lonesome specimen and say, "Hello Mr Magpie, how is your wife today?", in a bid to appease the harbinger of misfortune.

The truth is that no scapegoats are required to explain the horrific reduction of songbird numbers. It all our fault. We have levelled and poisoned the landscape in our drive for cheap food and when the refugees fled to the cities we decked and concreted over our gardens to park our cars and save cutting the lawn. So rather than killing anything I'm going to continue to support creative conservation and fill up my bird feeders, and when I see a magpie I'll smile.

Posted by magpiemom at 8:08 PM