Michael sent me the link to this Guardian article.

We remarked soon after we arrived back in Jakarta that although we weren't recycling here, we knew a "system" was in place that was very likely more efficient than our dutiful separation of glass, paper, and metal back in London.

Jakarta's 'mountain' waste tip provides a living – and a home – for 2,000 families 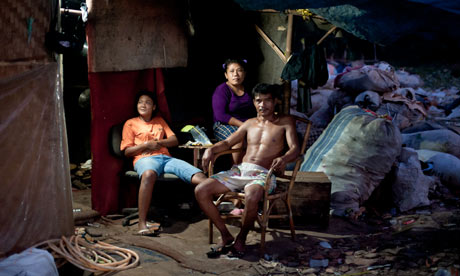 One of the many Indonesian families who live on the Jakarta waste 'mountain' in a home built from rubbish. Photograph: Javad Tizmaghz for the Guardian
They call it "the mountain": a sprawling, 110-hectare mound of Jakarta's rotting rubbish that stretches as far and nearly as high as the eye can see. Dark clouds of flies hover over decaying vegetables, cloth rags, mattresses, plastics, broken tables, medical x-rays and greasy car parts. Squelching among it all are the mountain's stray cats, goats, rats, cockroaches – and thousands of men and women, rifling through the rubbish to find their own personal treasure.
"Woo hoo, a mobile!" cries one 20-something scavenger as he pockets the phone with a blackened hand and, with the other, flings a plastic bottle into the wicker basket on his back.
All around him, scavengers are loading their baskets with aluminium tins, glass bottles and plastics of every variety. Some dance among the mountain's many bulldozers, their mechanical arms busy flinging rubbish skyward, while others scavenge the fresh loads of trucks that wind around the mountain's base and deposit the 6,250 tonnes of Jakarta's daily rubbish anywhere there is space.
Scavenging at Bantar Gebang, Indonesia's largest trash dump, is a 24-hour business – and business is booming. "I came here because the work is good and I can be my own boss," says Umi, a 47-year-old former paddy farmer who, after living on-site for 20 years, proudly declares herself the mountain's resident trash lady. "When you farm rice you have to wait for the harvest and the work can be backbreaking. Now I work when I want to work. There's always something to find."
Bantar Gebang, 20 miles east of Jakarta, is a peculiar case of Indonesian self-enterprise. Built in 1989 on rice paddy fields, the tip today is awash with former rice farmers who once dug the earth for their food and now dig the "mountain" for their earnings, with many of them living atop the tip in constructions made from the rubbish itself.
Their one and two-bedroom huts, fashioned from scrap wood, cardboard, rugs, plastic advertisements for credit cards and nails rummaged from the tip, blend like ragtag camouflage into the mountain's hillside. Cafes furnished with abandoned tables and sofas offer tea and biscuits to scavengers, while fields of trash are levelled at dusk for ad-hoc volleyball games. A small outdoor cinema, boasting scavenged speakers, shows films once a week, and the call to prayer by resident imams often wafts over the mountains of rotting waste.
Around 2,000 families are estimated to live and work at Bantar Gebang, but as Jakarta's waste increases, so does the tip's population. Most are unskilled workers from Java, some of whom have been scavenging in streets and rubbish bins their whole lives. But life here, says new resident Dadi, 25, can be a difficult adjustment. "I couldn't eat properly for weeks when I arrived, the smell was so bad," he says of the tip's stench of curdled milk. "I vomited every day."
Despite a strong sense of community on the tip, many also find that they are stigmatised when they cross its borders. "For a long time, it was hard to go back home," says Sar Jok, 59, a "boss" who recruits new residents into teams of scavengers and sells their findings to independent recycling companies. "People would say, 'Why do you live on the dump? It smells bad, you smell bad'. But when they saw I made good money, their opinions changed."
Scavengers, some of them children as young as five, make around 30,000 rupiah (£2.20) a day. Like the few paddy farmers who still till what's left of the neighbouring rice fields, many of Bantar Gebang's residents must do all they can to survive off the land. Nila, 31, a mother of three, regularly scavenges for her family's dinner. "I'll find vegetables, and fish or meat on the mountain," she says, cooking dinner over an open fire. "If it looks and smells OK, I take it. So far we've been lucky – nothing's happened to us."
Local charities have lobbied for greater healthcare for scavengers, who are at risk of everything from minor skin irritations and vitamin deficiencies to tuberculosis and tapeworm. Landfill landslides can be deadly. But the municipal government already faces difficulties just dealing with Jakarta's waste. Recent initiatives to trap the tip's methane production and build on-site recycling facilities have eased Bantar Gebang's pollution. But the Indonesian Solid Waste Association recently admitted that the capital city of 10 million may need another decade until it can fully manage its own rubbish. Renie Elvina Tiurma, head of a Jakartan household and corporation-targeted recycling initiative called the Green Project, says that the unofficial reliance on scavengers to remedy the problem cannot continue.
"Scavenging is not optimal because 40% of the 'recycling' is still not recyclable, it's too dirty to be processed," Tiurma says. "If Jakartans just sorted their own trash, we wouldn't have landfills like Bantar Gebang. Around 48% of a household's waste is recyclable and another 40% is compostable. But there's not much awareness or understanding here about recycling, as it's not yet government policy." While Jakarta is still years away from diminishing its rubbish to a level that would pitch the scavengers into other work, just the thought of a different future is too much for some.
"I met my partner here, my life is here," says Nila. "I honestly don't know where else I would go."
http://www.guardian.co.uk/world/2011/sep/27/indonesia-waste-tip-scavengers
Posted by magpiemom at 4:50 AM