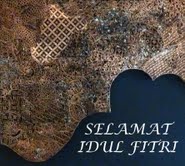 card by MJPW
Everyone we know in Jakarta was planning to celebrate the holiday Tuesday and Wednesday of this week. Having wished several people a happy Lebaran yesterday, we discovered from our friend Mark D. at dinner last night that for all members of the largest Islamic group in Indonesia the dates had been shifted to Wednesday/Thursday: a government proclamation was issued Monday afternoon. With newspaper delivery suspended for Tuesday's expected celebrations, we had no idea this had occurred and the staff here at the Ritz-Carlton were too polite to correct us when we greeted them.

Online report from the Jakarta Globe:


To Fast or Not to Fast: Idul Fitri Confusion in Indonesia
Olivia Rondonuwu | August 30, 2011
Indonesia's government has declared that the moon is not in the right position for the Islamic fasting month of Ramadan to end as expected on Tuesday, causing hungry disappointment in the world's largest Muslim-majority nation.
Indonesians, 90 percent of whom are Muslim, celebrate the end of Ramadan or Eid al-Fitr festival with a feast and new clothes, but they have been forced to put their delicacies back in the cupboard for one more day.
Housewife Nur Arifah did not expect the announcement, which came late on Monday, and got up early that day to cook plenty of stewed beef for her family in Jakarta.

"My nephews and nieces have all gathered in my father's house to celebrate with new clothes, yet it's the wrong day.
"The market has already shut, so for me to be able to cook a new dish...we might as well eat instant noodles for Eid al-Fitr," she said.

Many other Muslims who were set to start eating during the day returned to fasting between sunrise and sunset on Tuesday, while shopping malls pushed their closing holiday to Wednesday.

The position of the moon determines the start and end of Ramadan, and astronomers and Muslim bodies told the Indonesian government the moon was too low to herald Eid al-Fitr.

But members of Muhammadiyah, the country's second biggest Islamic group, are still celebrating Eid on Tuesday since some astronomers say it falls on that day.

Other nations, such as Saudi Arabia, are celebrating as well.

Last year the country's highest Islamic authority admitted it had got the direction of Mecca wrong, causing havoc since it meant mosques were all facing in the wrong direction for devotees to pray facing Saudi's holy Islamic city.