Monday turned out to be basically ten hours of hanging around the hotel, filling in time until our vital documents were finally delivered in the evening. Once these re-entry permits were in hand, we joined our friend Patricia for dinner, prior to the three of us boarding a Singapore Airlines flight back to Jakarta. APEC's offices used to be based in Singapore and Houston, so the new centralization means Patricia has a very long commute, flying to Jakarta on Monday nights and returning to Singapore  after the end of the work day on Thursdays.

We started our wait with another leisurely brunch in the huge Marina Bay Sands café. I happened to catch sight of the bill, where the charge for two was printed out (we had a bed-and-breakfast deal, so no figure appeared at check-out). Tasty and varied though the buffet was, I don't think we'd be willing to pay $89.95 for the experience, especially not when we were sitting elbow-to-elbow with hundreds of other hotel guests.

After brunch we made our way to Sky Park on the 57th floor.

Stone flooring I'd dearly love to have on our upstairs patio in France. I'm including two almost identical pictures just in case the opportunity someday arises. 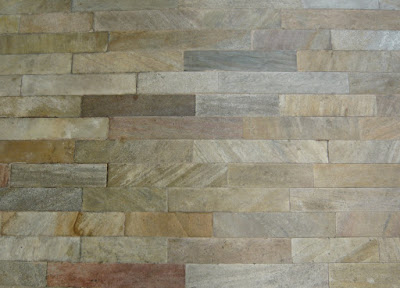 The wood planking wasn't so bad either. 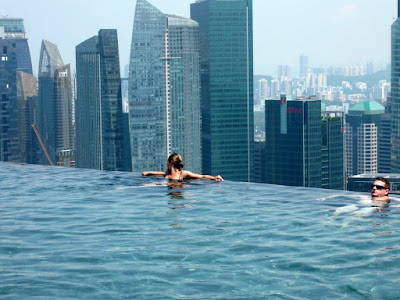 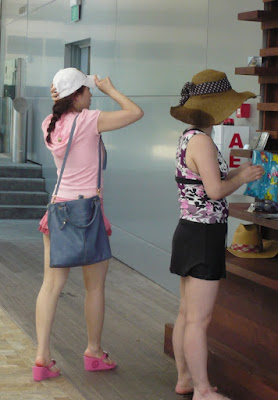 Not an invasion but container ships visible from our floor.

Another port view as we were leaving.... 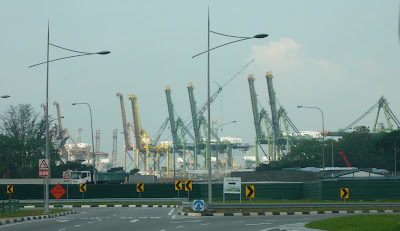 ....and a Wikipedia panorama that shows why Singapore jockeys for #1 position with Rotterdam and Shanghai as busiest port in the world.

After all this rubbernecking, we wandered down to the Rasapura Masters food court in the mall for a late lunch. Lots of tempting choices—Chinese, Indian, Malay, the Singaporean trifecta—so we opted for a little of this, a little of that, with only dessert proving to be an experiment too far. 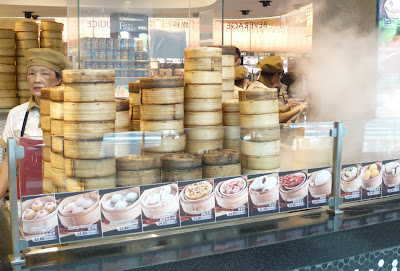 Won't be trying to make this mouth-wateringly golden Peking duck at home any time soon. Even our previous night's more easily emulated Italian fare is unlikely to be copied. As my sister Cheri emailed, "Think I'll throw a frozen pizza in the oven - inspiration from Mario B. website!" Exactly. 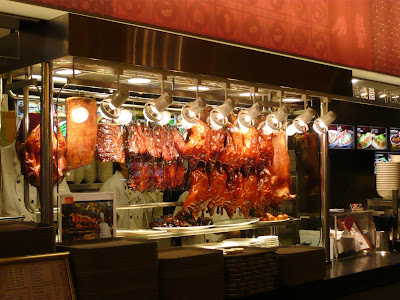 After sampling our fried oyster omelet, savory carrot cake, and noodles with beef, I decided I really had to save room for one of the shaved ice desserts I'd seen written up in an article on Singaporean street food. Here are some of the garnishes.

I hadn't looked closely enough at the bowls with yellow contents at the back —or the picture on the reverse of the poster that advertised Ice Kacang. Perched on top of shaved ice stained with cotton candy pink, lime green, and root beer brown syrups was—creamed corn. And underneath lurked some sort of red beans. I did finally get Michael to take a bite of the ice, just so he could say he had tried this signature hawker dish.

Marina Bay Sands check-out was almost as crowded as check-in. 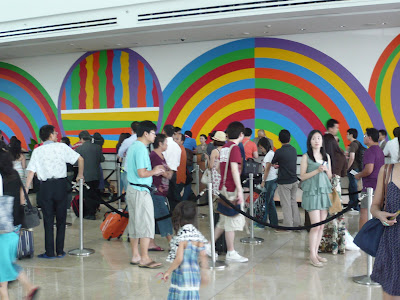 Waiting in an expensive Singaporean hotel, of course, always has the consolation of gazing at floral eye candy. 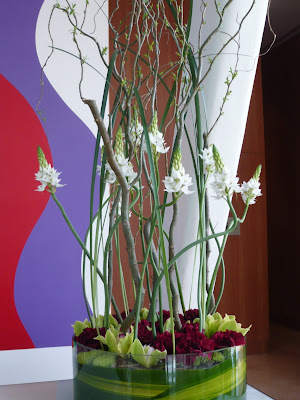 Taxi to Patricia's home in a leafy Singapore suburb. Her husband and daughter were away, but we got to meet her rugby-playing son Josh. Although he's athletically broad-shouldered, his slender frame didn't prepare us for the quantity of moussagna (his mother's trademark amalgamation of moussaka and lasagna) he was able to wolf down. Teenage boys! I'd forgotten....

While Patricia put the finishing touches on dinner, we admired the beautiful rock garden and pond in the front yard. Her husband Hock comes from a family of lawyers, and his father had been given this splendid landscaping gift by grateful Japanese clients. 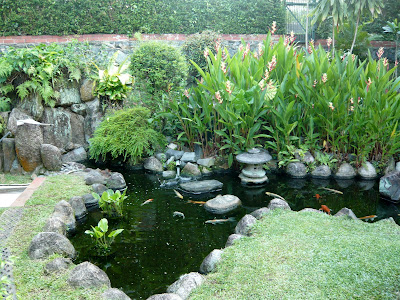 From moussagna to the Silver Kris lounge via the duty free shop at Singapore airport. Since Hock spends a lot of time in the air, we were able to breeze through check-in and infiltrate the first-class lounge sanctum on Patricia's coat-tails. Flying is never fun, but if you have to do it, this is the way to go.
We didn't take photographs there, but I'll finish up with a few snaps of the business class Silver Kris lounge at Jakarta airport that I neglected to include at the beginning of this 3-day saga. It was so comfortable that it almost made up for the fact that I had two pairs of good manicure scissors confiscated at the security check. I was aware we had packed small suitcases, but I hadn't registered that Michael's plan was carry-on only. 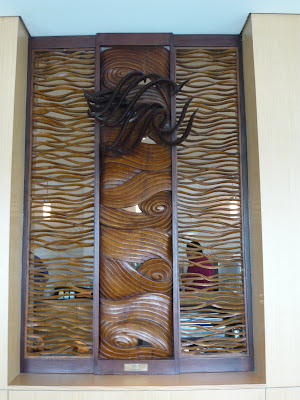 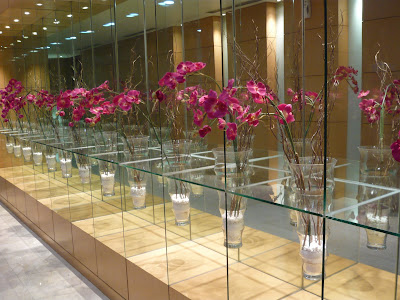 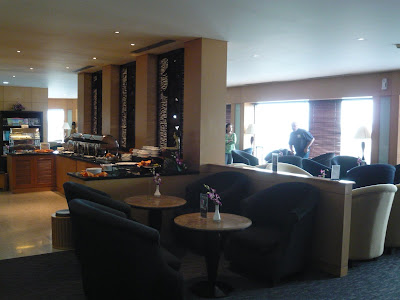 Unfortunately, we're rarely hungry when we encounter these free spreads. Sod's law: I almost always need to buy something to snack on when waiting for planes for our evening flights back to London from Philadelphia. 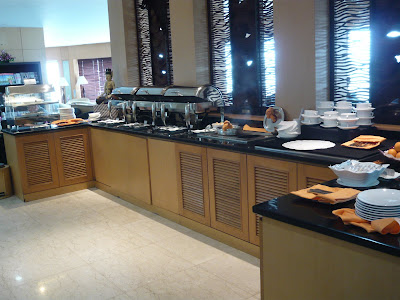