Yesterday we marched along Piccadilly with protesters demonstrating against public funds being used to underwrite the papal visit. Placards and speakers denounced cover-up of child abuse by priests, refusal to allow use of condoms in countries afflicted by poverty and Aids, intolerance toward homosexuals and female clergy, blockage of stem cell research. The animus was against the church hierarchy not individual practicing Catholics. In fact, recent polls show that though few feel Pope Benedict should be replaced, a large number of British Catholics would support many of the arguments being made yesterday—and, indeed, several showed up on the march. Sample poll results:

Only 4 per cent of British Catholics agreed that “artificial” forms of contraception should never be used. 23 per cent thought couples should make up their own minds and 71 per cent believed that condoms should be used more often in order to avoid unwanted pregnancies and sexually transmitted infections.

Just 6 per cent said abortion must never be permitted and a further 11 per cent agreed that it should be allowed only as an indirect consequence of life-saving treatment. In contrast, almost half of those questioned (44 per cent) believed that women should also be allowed to terminate pregnancies in cases of rape, incest and a severe disability to the child and a further 30 per cent said abortion should always be allowed.

Only 11% of respondents supported the Catholic Church doctrine that homosexual acts are morally wrong. 28% said that it was up to adults to do what they want in private while 41% stated that gay relationships should be celebrated as well as straight ones.

Two-thirds (65 per cent) believed priests should be allowed to marry – twice as many as thought they should remain celibate.

Just 18 per cent felt the Vatican had been criticised unfairly over the recent clergy abuse scandals, while 65 per cent said the behaviour of paedophile priests had been covered up and the Church had been rightly criticised. Despite all this, 72 per cent of Catholics wanted Benedict XVI to remain in his post, compared with just 14 per cent who wanted him to stand down.

There were two main rallying cries. "Protect the children, not the priests" and "What do we want? A secular Europe. / When do we want it? NOW." (NB "A secular Europe" would promote freedom of religion; government would, in this ideal and idealistic arrangement, have no bias. It has to be admitted, though, that many of us would like to see entrenched religion wither away, leaving merely an ethical framework.) We only participated in the Piccadilly segment of the march, so didn't get to hear Geoffrey Robertson and Richard Dawkins speak at the end. We also missed Peter Tatchell, but had heard him defend his stance eloquently in an earlier debate at London's South Place Ethical Society. [This stance did not include the views pointed out below by an anonymous commentator on my blog post.]

I'm a non-joiner by instinct and had never participated in a protest before—though I still regret not figuring out a way to go down south from New England during my college years to march for civil rights. Moving on, however....the question of taking the time and trouble to join in a worthwhile demonstration rises again. On our next visit to the States, we don't leave Philadelphia until Oct 31, which means we could just make it to Washington DC on the 30th for Jon Stewart's "Rally to Restore Sanity." A compromise is always possible, too, with Michael going and me staying in Lansdale to get a few more casseroles into Mom & Dad's freezer. What do you think, Kate and Walter? Any interest in this? 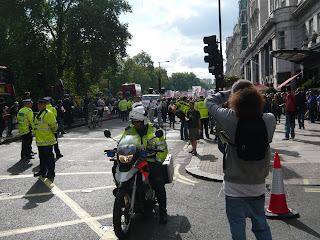 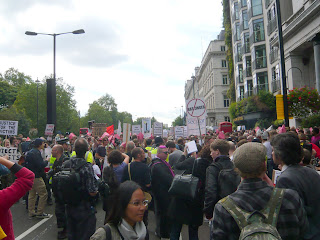 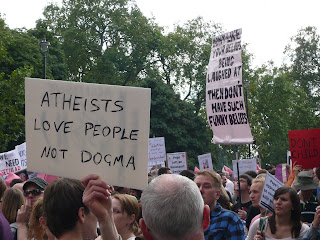 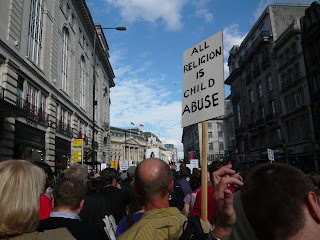 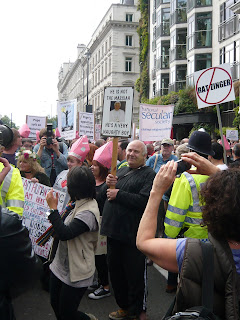 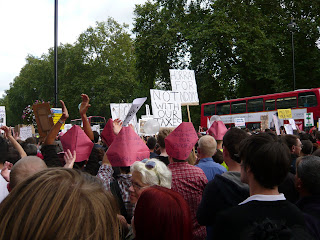 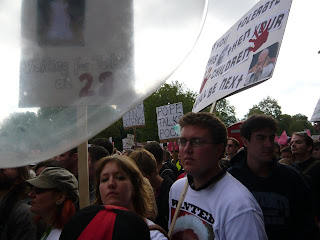 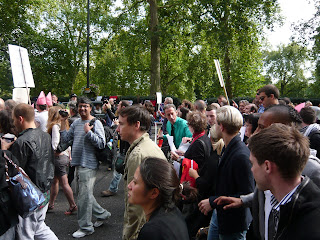 Another celebrity from the back: Ian McKellen 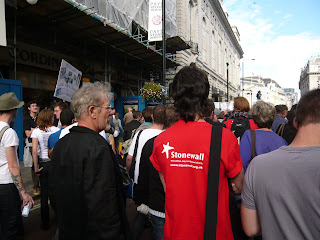 A two-sided sign I was delighted to see:
"Not a bridge-maker but a bridge-breaker"
(clever play on literal meaning of "pontifex")
and
"He does evil who hides evil" 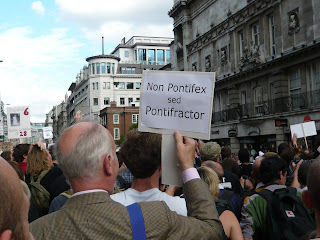 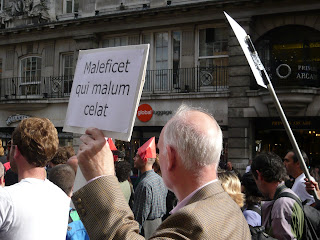 The highpoint of my day: being called "Marxist scum" by one of the (very few) hecklers on the sidewalk.

And I can't resist including a link (please may it long remain -- they're always disappearing for some mysterious reason) to Penn & Teller's Bullshit episode on the Vatican. Consumer warning: this may well cause offense if you have even a vestige of belief in Benedict XVI's infallibility.

http://www.youtube.com/watch?v=fcXBuDuEZTs (links to parts 2 and 3 on right)
Posted by magpiemom at 9:18 AM