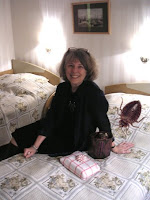 "Last night I dreamt I went to Manderley again." Unlike the second Mrs de Winter, I went to bed yesterday expecting a very different sort of dream after reading an article in the G2 section of the Guardian that had me itching all over again.

In 2004, Michael and I spent Christmas in St Petersburg, a fabulous trip stuffed full of cultural nuggets. Unfortunately, however, my mattress in our minimalist Soviet-style hotel was also stuffed full of bedbugs. The sleeping arrangement was twin, so either Michael was one of those lucky folk that don't react to bedbug bites or he wasn't sharing his bedding with tiny critters.

There were a couple of doctors in the group we were with, who at Christmas Day breakfast immediately diagnosed the rash around my wrists and ankles. And sure enough, as they predicted, my sheets were dotted top and bottom with drops of blood. I took a bath (warm--not, it turned out, the best idea), we changed rooms, and that seemed to be that in the St Petersburg cold. It wasn't until I was sitting in my seat on the flight home, several days later, that the allergic reaction set in. My neck began to itch and I could feel lumps forming under the skin. Back in the flat that night, I woke up, put my hands to my face and--quelle horreur!--the lumps were spreading. By the time I got to a doctor, I was hiding under a scarf so that I didn't frighten little kids. Here's a photo of my neck, before the center of activity traveled to my arms: 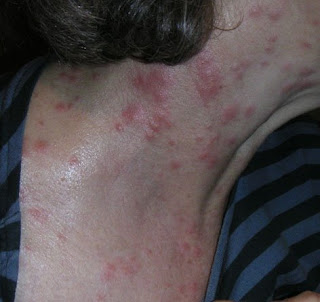 After a couple weeks of shots and pills, the bumps disappeared and I wasn't left with the scars I had feared. Googling revealed that I couldn't blame the bites on a no-star hotel; Cimex lectularius is just as happy to visit five-star premises. Eventually I stopped thinking that I might have imported a few specimens in my clothes or luggage; I pretty well put the experience out of my mind.

Until yesterday. Apparently in the last decade there has been a threefold rise in London's bedbug numbers, the result of--what else?--globalization. As the author of the piece, Michael Hann, says in describing his family's current infestation: "It has all seemed a bit 14th century this past month." Shudder. We were so lucky that whatever bedbugs I might have carried must have fallen off before I entered the flat. Perhaps onto the airplane seat? The microbiologist/exterminator Hann interviews advises London commuters, "Don't sit on public transport." Too bad I've reached an age where younger passengers often chivalrously offer me their seats. On the plus side, though, the last bedbug bullet point reads, "Don't panic. Bedbugs don't carry diseases, and their presence does not make you unclean."

The St Petersburg incident wasn't our first exposure to bedbugs. After the fact, I'd realized in my twenties that all the bites that showed up each morning in Vrinaina, Greece, were probably from bedbugs. And we callously forced our eight-year-old daughter back into her guesthouse bed in the Puncak, Indonesia, only to find her sporting about fifty nips on her legs the next morning. Sorry, Kate! Perhaps you'd like to comment on this parental negligence???

Posted by magpiemom at 3:47 PM